The Utah Jazz and the NBA-DL: A Funny Quirk

Share All sharing options for: The Utah Jazz and the NBA-DL: A Funny Quirk

The Utah Jazz had a bad experience using the NBA-Developmental League a while back, which is sad because when they used it previously (Previous to the Utah Flash, at least) things worked out. In terms of sending Jazz players down there it worked for C.J. Miles, was neutral for Kosta Koufos, helped Kyrylo Fesenko (dude shot almost 70 ft% down there), and wasn't the best for the long term development of Morris Almond as a future Jazz player. The Jazz are very hands off when it comes to our 'team'. But curiously enough, four of the 11 ROY's have played for the Jazz. 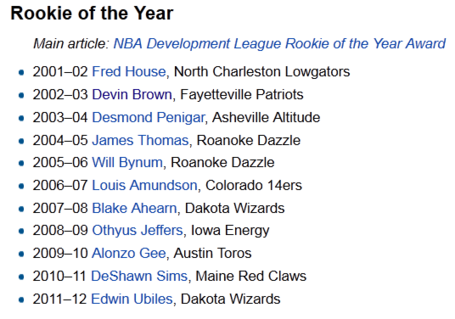 Devin Brown, Lou Amundson, Blake Ahearn, and Othyus Jeffers have all played for the Utah Jazz. Of course, none of them played for the Jazz affiliate in the D-League. But hey, it's not like our team recognizes it as a real minor league system. (N.B. Morris Almond was the impact player of the year, as a rookie. And he deserved that, he was great. Some of our coaches were too stubborn to recognize that I guess.)