Sexual Favors with the Underkanter will Destroy the NBA

Share All sharing options for: Sexual Favors with the Underkanter will Destroy the NBA

couple months ago I wrote about Burks and Hayward. Specifically how both guys fit the profile of the most important type of player in the NBA ... the type of player that makes the biggest difference regarding a team's ability to win games.

The versatile wing who rebounds, passes, scores, and defends. I'm still in awe that, after years of pining for another Jeff Hornacek, we now have two wings who fit this profile. And even better, all signs say they can play together very, very well.

But enough about them.

Today it's time to look our other two Fantastic Four: Favors and Kanter. And I'm sorry to open up old wounds, but to start we need to see a horrible moment from this last year: the final play of our Feb. 22 loss to Minnesota:

When this play happened, the Game Thread and Twitter both went crazy. It was, of course, right when our team was doing the same thing every night. The bench would get a lead in the early 4th quarter, and the kids would sit while the vets lost the lead. And so everyone was irrate. "Derrick Favors would have blocked, or at least challenged that shot" was the refrain. And of course, we don't know if that's true. But it seems true. Favors is a shot-blocker, he's athletic enough to respond more quickly than Al, etc., etc., etc.

But this isn't really the point of this post. The point is an answer to a question that was posed by some: "But if Favors moves to challenge the shot, who gets the rebound?"

The answer, and more, after the jump

To really understand this, we need to go back to the Sloan Sports Analytics Conference at MIT. There was really so much going on at this conference, so many fascinating new ways to look at sports, analyzing performances, and everything about them. They really made Hollinger's PER look like 6th grade pre-algebra.

One of the best looked at synergy in basketball and what it means about building teams around players who truly fit together: Positive and Negative Synergies in Basketball. It begins, as all great things ought, with a quote by Steve Jobs:

My model for business is The Beatles. They were four guys who kept each other’s negative tendencies in check. And the total was greater than the sum of the parts. Great things in business are not done by one person; they are done by a team of people.

For those who are not so into reading the actual study, here's a terrific explanation by Kevin Arnovitz at True Hoops. He brings out one of the most important points in the original study, quoting the original author, Eugene Shen:

"A player's value to his team depends on the skill of the other players on that team."

We understand this truth intuitively, but we often also forget it. How many times do we say "this team needs a three point shooter" because we know it will help open up the point for the post players to do their thing. At the same time, how often did we criticize Devin Harris at the beginning of the year—even though the game plan was asking him to abandon virtually every skill he actually had.

It's not about lots of good players. It's about finding good players whose skills complement each other most effectively. It's about understanding synergies, some of which are highlighted in the Sloan study. And though I'm not going to specifically address the synergies of the research, I want to focus on the principle of complementary skills.

Back to Favors and Kanter

This post is not about offense. I don't know at this point if they're both capable of being 25 ppg monsters or not. With Kanter, particularly, I don't know how anyone can legitimately predict anything about his scoring right now. Give him an off-season and another year, and then we'll talk about his scoring and how/why/where it fits with the other post players (or doesn't fit).

But I want to look at defense now. What we have in these two guys is one of the most astonishing and perfectly blended defensive skill sets I can remember seeing from two post defenders. And here's answer to the question posed above:

if Favors moves to challenge the shot, who gets the rebound?

Enes Kanter will rebound it ... you know, one of the ten best rebounders in the entire NBA.

And that's the guy who will be patrolling the paint alongside our shot-blocking Favors.

Finding Balance and Fitting Together

The more you look at these two guys, the more you see how well their defense blends together.

First: both have already proven to have what it takes to be good man-on-man defenders. That's a wonderful starting point. But let's look at the rest

You could go on. The remarkable thing about these two guys is that even though they have different, but complementary strengths, they don't really have huge weaknesses the other has to hide.

Kanter is a better rebounder, but Favors ranked number 13 in the NBA. Kanter's built like a wall, but Favors is strong and physical too. Favors is by far the better shot blocker, but Kanter blocks at a Milsappian rate (he ain't the second coming of Boozer this way).

Again, you can go on. They both do all aspects well, but one comes out as having it as a primary skill while the other has it as a secondary, complementary skill.

We don't really know how the two players will develop. Favors seems about as sure a thing as you can get from a guy with his limited playing time and role—but still, he's still to eclipse 20 minutes per game. No matter how certain some are that he's the real thing (and include me in that, obvously), it's not guaranteed. Kanter is a bigger question, and much of his future role will depend on his ability to become a better offensive player.

But honestly, 10 points per game at a decent percentage will probably be enough for him to get the full starting role by 2014 or so.

And once they are both at their prime, playing 32-36 minutes per game, doing things with the effectiveness of four-year vets ... holy cow. At least defensively, they could wind up eating the NBA alive in the post.

I love the future our Fantastic Four portend to give us.

[Ed. Note: I put this back in, it is editorial and necessary. It's from a Jazz media member's twitter feed.] 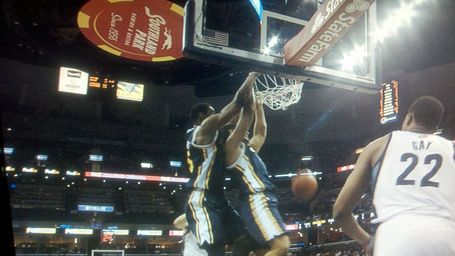