The "I Learned it By Watching You" Edition -The Downbeat #768

Share All sharing options for: The "I Learned it By Watching You" Edition -The Downbeat #768

So this week has been probably the least I've paid attention to the Jazz since the lockout. I guess it doesn't really matter since the talk of the town is the OKC Thunder. This is how I felt the 2nd half of the game went: 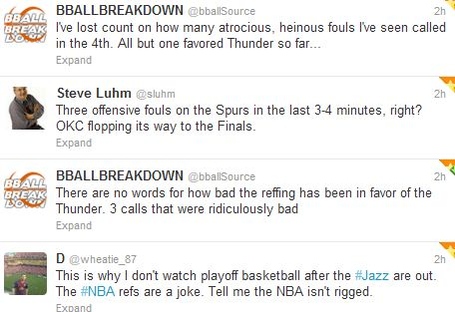 I am not a Spurs fan, I don't forget how AWFUL the officiating was in Game 4 of the 2007 WCF. I'll never forget the frustration I felt as a Jazz fan watching Manu Ginobili go to the line 13 times in the 4th quarter alone! I respect their game, they way they play as a team, how they run their franchise but I am not a fan, I don't get emotionally charged by the Spurs. That being said I was upset last night with how the Thunder won, it felt very much like Game 4 of the 2007 WCF. Yes the Thunder made the big shots but its sooo much easier to play loose when you know you're going to get the calls and can play defense without worrying about being called for a foul. Yes the Thunder deserve to win the series but lets not pretend officiating didn't give them an advantage.

Last night was interesting on Twitter. I don't LOVE the Thunder. I don't think Kevin Durant is a saint. I know, I know that is some kind of sin right? I don't hate the Thunder, I don't hate Kevin Durant, but for some reason since I don't love them people think I hate them and say I don't have a soul (Just kidding I imagine my friend on twitter who tweeted that was just joking). People say that just because a Jazz fan doesn't like the Thunder its because they're bitter or jealous, that is not me.

Kevin Durant is a top 3 talent in the league, he seems like a nice enough guy however imagine if he was playing for a team like the Cavs or the Bobcats, would he be as perfect? Now that is not my own thought it came from Jefferson Mac.

Durant is not the first player to be a nice guy to stay with a small market team, Durant is only on his first contract past his rookie contract. What about guys like Stock who took less money and stayed through the ups and downs, Karl Malone (18 years) or Reggie Miller? What about current players like Tim Duncan, Dirk etc?

Maybe if Lebron had originally played in the circumstances that Durant is in he wouldn't be the "villain" he is today.

You know who I do LOVE. I love love love Favors and I love Burks, Hayward and Kanter. Don't we all wish that our poor players weren't lactose intolerant though. I hate that they have to avoid that nasty milk. Watching the Thunder does make me wonder why on earth the Jazz's front office and Coach Corbin have the mindset that playing our very young, very TALENTED players=losing. Our players are working hard this summer lets hope they don't get too soggy.

I do get the argument that you don't want to teach young players losing habits, I get that I agree with that. However when you play the kids and they help you win and they have talent and they are the future why not play them more?

Someone on Jazzfanz gave a nice summary of the interview:

So basically the same we've been hearing, we're young and don't really want to get younger. The thing is when do we ever really believe what KOC says with regards to moves the team will make.

The Thunder is the first team that isn't the Lakers, Spurs or Mavs representing the Western Conference in the Finals (congrats to the Thunder on that feat) since the Jazz . Here are highlights of the Jazz's first Finals win (game 3 NBA Finals 1997) with local news coverage!