The Downbeat #793- The One with All the Magic Spray Edition

Share All sharing options for: The Downbeat #793- The One with All the Magic Spray Edition

You can check out the full box score here:

Here is the Jazz part of the box (click box for a larger image):

Evans remained his efficient self shooting a remarkable 6-8. His dunks were so entertaining as were his blocks. Stockton was impressive. I joked on twitter that the Jazz should sign him due to the fact that he knows more about the Jazz offense just from sitting around the dinner table than all our coaches do combined. It was a joke. It is wonderful however to see a pass-first point guard running the offense. A pass-first point guard makes other players so so much better. Kanter and Burks were also impressive. And to me and Moni's delight there was a great shot of Kanter running up and down the court!

So who do we like if any of those four former Jazz men? I know I have shared my opinion before about AK returning and I think out of those guys I still choose AK. I love AK. I think he could add so much to our team. I still like AK even after trading for Marvin Williams.

Who do you guys think? I guess it depends on who the starters are right? If Burks doesn't start I say Burks. If he does start I think Williams or Millsap (if he doesn't start) Just so many questions right now!

Marvin Williams arrived in Salt Lake last night. His official presser will be today. Some of the media met him at the airport last night. Here is the link to theJazz's video of him arriving

Welcome Marvin Williams. We are very excited to have you in Utah!

To know all the Free Agency moves check out the Atlanta Hawks SB Nation site, Peachtree Hoops post. It is so organized and easy to read with great information. Here is just part of his beautiful chart: 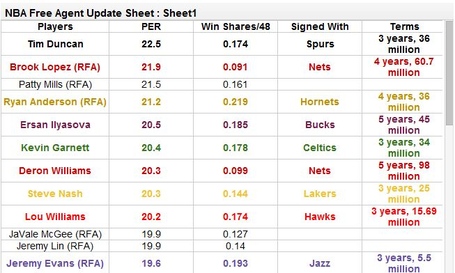 My_lo on twitter was on quite a roll last night. Can I just say I LOVE our twitter community.

Check out his timeline for the rest. You will be highly entertained!

Speaking of our twitter community. As Moni pointed out (on twitter) it was just wonderful to see everyone show support to our friend Jody. He wrote a great article about his challenges with his weight and his motivation to lose it. Read it! We all love Jody. He is the best beat writer we could ask for with the Jazz. He is so friendly to all the fans and makes us all feel apart of the team. I have met Jody quite a few times and he is always super nice to me. The first time we met was at the Jimmer/Jazz workout. He sat with me while the security guard was checking to make sure I was OK to go in. Jody made me feel such at ease and like I belonged. Talking with Jody was like talking with an old friend. Jody didn't treat me like some low-life blogger, he treated me like a friend. I and the rest of SLC Dunk wish Jody good luck and give him our support in his weight loss, healthy lifestyle adventure.