I was a Psychology Major, But Please Don't Ask Me What You're Thinking Right Now - The Downbeat - #795

Share All sharing options for: I was a Psychology Major, But Please Don't Ask Me What You're Thinking Right Now - The Downbeat - #795

Most of the time I can tie in the songs I share with you into the downbeat. Not today. You just get to enjoy music I like, because I'm nice and I like to share. Just as a note, the Boyz II Men song was a joke, not a cool piece of music I wanted to share with you.

So Summer League came and went by really fast. Although some of the Jazz members may initiate team meetings and workouts, to my knowledge, the team won't reconvene officially until training camp, which will be about 3 weeks into September. But the Orlando Summer league is over and Hayward and Favors are already done playing punching bags for the Olympic team. We take it for granted that all of these guys are working on their individual games, but I also think it's obvious that some do a better job in the offseason than others. Consider for a minute that you are Gordon Hayward or Derrick Favors. What do you do to work on your game? How much to you lift and run? Who do you go to for instruction on how to do certain things? How do you hone a basketball skill? Is it by repetition or by breaking it down? I don't know.

It's hard to apply NBA ball players' lives to our lives, but it's also fun. For instance I have been thinking about this whole amnesty provision thing. The Phoenix Suns just used the amnesty provision on Josh Childress. So Childress will be paid $21 million over the next three seasons to leave the Suns. Does he try to come back and play for a team this season if he clears waivers (which he will)? Let's say your job paid you your full salary for the next three years to not do any work for them. Would you find a similar job with another company? What would you do?

Childress, or any other amnestied NBA player is free to do whatever they'd like. Join the ministry? Start a non profit organization? Compose and record the next hit rap album?

This is why you hear a lot of GMs talk about "the love of the game of basketball" being the most important attribute in a prospect's file. Every great player loves to play basketball, or at least loves to be better than their opponent at basketball. As far as our Jazz players, it is hard to tell about all of them and their psychologies and motivations. It seems like Hayward has the right competitive DNA. We hope and pray that Derrick Favors does. I think he does. Alec Burks too. Do any of the attitudes of current Jazz players worry you?

The psychology of sports and athletes is fascinating to me. We have already seen a huge increase in the study of players personalities and tendencies in draft profiles and I think we will only see more.

The Jazz have been fairly aggressive this offseason. The moves they have made appear to be aggressive, yet calculated. I feel like Kevin O'Connor has been thinking about trading for Mo and Marvin Williams longer than any Jazz fans have. I'm sure the Jazz have kept tabs on both players and their availability for more than a season or two. But there is a risk with any move that is made or passed on. It must be so nerve-wracking to be a front office person looking to make a move.

Look at the Jazz this offseason. They made moves to acquire Mo Williams and Marvin Williams, but in doing so, they also closed the door on the ability to acquire most other point guards or small forwards. For instance, if the Sixers came to the Jazz tomorrow and offered Andre Iguodala for Al Jefferson in efforts to cut salary, would that be an offer the Jazz would have to pass on since they have Marvin? And would they kick themselves for it? 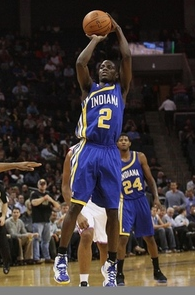 The bigger question is at point guard. The Jazz probably wouldn't have had a chance to persuade Steve Nash to the Jazz. Fine. But what if they could have acquired Kyle Lowry and his $12 million over the next 2 years, for only the Golden State pick? I think they'd prefer that over Mo Williams, but too late now. Darren Collison (pictured above) at $2.3 million? Or how about Jarrett Jack and his expiring $5.5 million contract? I'd take them over MoWill too. Would you rather have Mo Williams at $8.5 million or Raymond Felton at that price tag over 3 years? I'd take Mo in that case. Mo is our guy and it does little good to look back with regret, but I am attempting to demonstrate how difficult it is to make a bold move in free agency or in a trade or draft pick. Not only are you hoping that move works out, but you have to be cognizant of what other deals you might be locking out. What is the opportunity cost of every move?

Speaking of opportunity costs and costs in general, I have been thinking a lot about the true worth of NBA players. We talk a lot about players' worths in terms of market value and what not, but what would each player be paid if they were paid according to their wins produced and their draw to fans? For instance, if the Jazz traded Derrick Favors away for an average power forward tomorrow, how many millions of dollars would that cost the Jazz in the number of fans who lost interest in coming to Jazz games?

I can't tell you how huge of a massively big mistake the Knicks will be making if they don't match the contract offer on Jeremy Lin. Not only is he probably twice as many wins better than either Jason Kidd or Raymond Felton, but he is so valuable to the franchise as a draw. He made basketball relevant in Manhattan for the first time in years. I can't believe they would consider letting him walk away, especially when Brooklyn is trying its hardest to steal fans with their interesting, if not successful, venture towards contending.

But let's say you could pay each Jazz player according to the wins produced plus whatever amount of popularity they have in drawing Jazz fans to games. And let's say all the rules apply to the current CBA still in regards to max contracts and such. What would you pay each player? Who would be the highest paid player and would they be worth a max contract? Who is the player that most fans come to see play ball every night? Is anybody listening to me?

I've been doing some career comparisons on the young four guys we have and trying to figure out what their future could be. One day I'll share what I have found so far, but today, I will discuss Alec Burks. I hear Dwyane Wade thrown around a lot with his name, but the problem is that Wade was significantly better, in my mind, during his rookie season than Burks was. I have said often and believe to a degree still that Alec Burks has a lot of Russell Westbrook in him, for good and bad. But I think their careers will take a very different path, due to their roles on their teams, alone. But the way they score is similar.

Obviously their rookie years don't match up perfectly, but there are a lot of similarities in their PER, their scoring numbers and efficiency and their usage. Obviously Westbrook had the ball in his hands more often than Burks which explains the Turnover and Assist numbers to a degree. But look at Russell Westbrook's steady increase in production his first four seasons. I am hoping for a similar increase in Burks. Let's revisit this comparison later in this season, shall we?

I have no interest in hashing out the Deron Williams story, in a "would he have stayed/wouldn't he have stayed" manner. He's gone. It's over. I stand very alone in thinking there was a decent chance (IF THE JAZZ HAD PUT THE RIGHT PIECES AROUND DERON), that he could have been persuaded to stay here past last contract. I know many of you disagree. But sticking with my psychology theme, I understand why any Jazz fan would convince themselves of that. If there is a chance Deron stays with the Jazz, then the trade for Favors, Kanter, Marvin Williams, and the Golden State Pick is probably still a great trade, but debatable until Favors and Kanter develop fully. But if you convince yourself that there is no chance the Jazz can keep Deron WIlliams in Utah, then the trade is a steal, an absolute theft. And I understand if you truly, truly believe it as well.

For the record, I like the trade and am glad we have Favors, Kanter, et al AND I think the Jazz could've retained Deron with the right moves and approach. They aren't mutually exclusive ideas. But there is this evidence courtesy of Jazz fan James, who "asked" Deron if he would have re-signed with Utah. 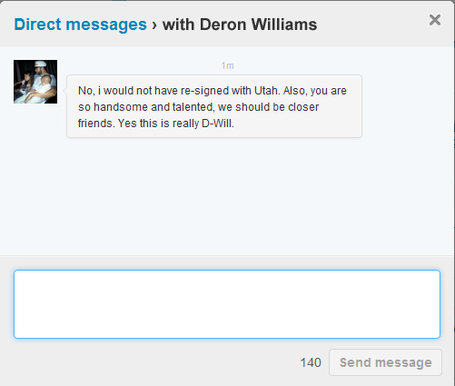 What I do wonder is could the Jazz have put together a more competitive team around Deron coming up into this offseason than the Nets did? What is the best lineup the Jazz could have conceivably assembled? If you just take Deron's friends alone, you could/should have Deron, Ronnie Brewer, Kyle Korver, CJ Miles, Paul Millsap. The Jazz could have had cap space this summer to pursue a center. Maybe they could have traded Al Jefferson and Gordon Hayward for Andre Iguodala. So is your best case scenario Jazz team more competitive than the Nets and Mavericks, hypothetically?