The Return of Count Statcula: How did the Jazz score last season?

Share All sharing options for: The Return of Count Statcula: How did the Jazz score last season?

Do you like Statistics? Trick question. I know you do. That's why you keep coming back to SLC Dunk, where we try to bombard you with numbers. Okay, that tag-line needs some work. Still! Let's look at some quick stats today. This was originally going to be part of a larger post, but I thought I would introduce some of the points here first. The Utah Jazz are awesome. We already know this. They are awesome because of their legion of bigmen: Al Jefferson, Paul Millsap, Derrick Favors, and Enes Kanter. Heck, even Jeremy Evans can come in and do damage when he's allowed to! The Jazz can be a lot more awesome and less predictable if they diversified their offensive distribution. That's the polite way of saying we need our guards and wings to step it up.

If you have an account with mySynergySports.com then you are awesome. They have a lot of info out there for geeks like me. If you are a super-duper-mega geek you can work their info out backwards and forwards to get even more breakdowns that they do not show. I did exactly this. Their regular info (which I'll get into in another post) shows data for each play type, how many times it was attempted, how successful they are at it, and so forth. This info is separated into stuff the Jazz did on offense and what they tried to do on defense.

I reverse engineered it to find out how many points per game we were getting (and taking) at each play type. Was it uniformly good or bad at a certain position group? How did this match up with against our opponents? These few, and other questions were answered in the Estimated Points per Game Stat. It's simple, it was # of possessions for that play type multiplied by their calculation for points per possession (PPP); then that value was divided by the number of games (which was 70 this year: 66 regular season + 4 playoffs). So, sadly, yes; the beat downs from the Spurs do factor in here.

Also please note that these are just the PPG values, and not efficiency -- sometimes we just kept going to the well with an inefficient move to the point that the dividends did end up summing into something hard to ignore. Also please note that these play types are grouped into theoretical positions -- but many times during a season a bunch of crazy things can happen -- like Paul Millsap taking a spot up jumper, or Al Jefferson going isolation. Those are two bigmen who finished plays that are categorized and grouped into the PG, SG, and SF section. 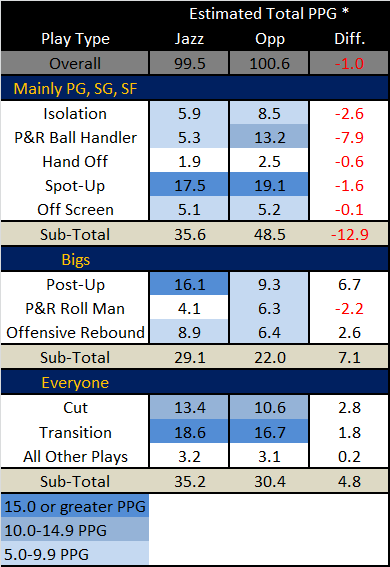 Over the course of the entire season (66 + 4 games) we came out behind in net EPPG (Estimated PPG). That is probably true when you added up all the points from the playoff games to our regular season's razor thin margin of error. We are getting killed by other teams' non-bigs. Our Bigs are holding down the fort -- but they need some help. Part of this could be resolved by running more, as we are proficient at it, but just need to do more of it. It's easier to get buckets in transition than it is to expect Earl Watson to hit a three pointer with 3 seconds on the clock.

The curious problem is that even with Devin Harris our Iso and Pick and Roll ball handler values are low. Maybe we just should have encouraged him to play his game more, huh?

The other major problem is that our pick and roll defense is so bad, while our post up scoring is so good. Do we have a problem where we have bigmen who are offensively focuses who couldn't give a care towards showing on pick and rolls? If so, it doesn't add up, really, it does not. We're a net +6.7 in post ups, but a net -7.9 on defending the opposing ball handler on pick and rolls. That's an overall net of -1.3. It's the same dudes involved in helping out on dribble penetration defense who are the guys getting the post up touches. Either get way better / more efficient at your post ups, or learn to play defense. (Or heavens, play the dudes who do both)

Also our pick and roll offense from the guy setting the pick is low. Lower than it should be. This could also be a mobility issue. When we run pick and rolls with Derrick Favors we get emphatic jams. Play him more.

Our bigs can score, need to help our guards out more on defense. Our guards need to pick up the slack and start scoring. We should run more, do more pick and rolls, and use our cutters more. Less post ups until they start helping on defense. (Post them up as a reward for helping out the team) Mo Williams is less of a creator than Devin Harris was, but at least he seems to fit what we're doing more. When Devin was here we didn't get much out of isos, or dribble penetration. Marvin Williams and maybe even Kevin Murphy will help with the off-screen and hand off scoring as well. And as always, we hold out hope that Gordon Hayward and Alec Burks will become star players who can hurt you in so many ways.

Waa-aay longer posts to come that look at this type of thing, but also include efficiency, frequency, and the changes over the last three seasons ('09-10, '10-11, and '11-12). E.g. -- did you know that two years ago the Jazz had the best transition offense by NBA Rank (in PPP) in the league? And that we were #7 last year? And this recently finished year we were #24. RUN BABY RUN. Easy buckets >>>> 10 foot turn around push shots when there are no guys in rebounding position.