Share All sharing options for: Utah Jazz Playbook - Does a relationship exist between three point shooting and playoff success?

We're doing a poll today. In this poll we're asking you, the Utah Jazz fans, what they want to see the offense do more of. A lot of you want to see the Jazz figure out this whole "three point shooting" thing. Three point shooting isn't a fad, or a gimmick anymore. It's not the 1980-81 season anymore where Larry Bird took 0.9 three point attempts per game anymore. And he is regarded as one of the best three point shooters ever. It's 2012, and Kevin Love took 5.1 three point attempts per game last year. It's a new game. And it's high time the Jazz joined the rest of this millennium and started to take threes. Right?

But I don't have the time for that. I'm interested in winning. I'm interested in winning in the playoffs. And winning in the playoffs by playing "Jazz Basketball". And I needed to find out if there exists a relationship between three point shooting and playoff success while playing our signature style of ball. What I found may be . . . well . . . surprising.

I looked at every Jazz team over the last 20 seasons, from this last season (2011-2012) all the way back before we ever made it to our first Western Conference Finals (1992-1993). For each of those seasons I looked at the Jazz' NBA Ranks for Threes made, attempted, and our three point percentage for those years. Rankings worked out better because each season is a monster unto itself. The changing trends of the game over time mean that as a whole, the league shoots more or less threes than in another, individual season. Where the Jazz rank against their peers works better than random numbers -- even if the numbers are more precise. There is a problem here, there are 30 teams in the NBA right now. This was not the case back in 1992. I did not adjust the Jazz rankings to be last though, if they were indeed last in one of those earlier years. After all, we should endeavor to look at how the Jazz fare from the top of the league down. Not from the bottom up -- we're not the Warriors. We're not a cellar dweller.

Beyond those three factors (3PTM, 3PTA, and 3PT%) I also looked at what those three ranks added up to, and their average. Furthermore, and this is the critical aspect, I looked at the Jazz' regular season winning percentage for that season, and listed how many playoff wins they achieved that year. So we can look at how well the Jazz shot from deep against how well they performed in either a) the regular season, and b) the playoffs.

Of course, if a relationship exists it will not be a direct causation. It's not purely because of threes that the Jazz would advance. However, there may or may not be a relationship at all. If there is, it may not be causation, but there may be some other correlations to explore. (Maybe our better, more complete teams -- teams that would win without taking a lot of threes -- were still capable of making them when open?)

The Data for all 20 seasons: 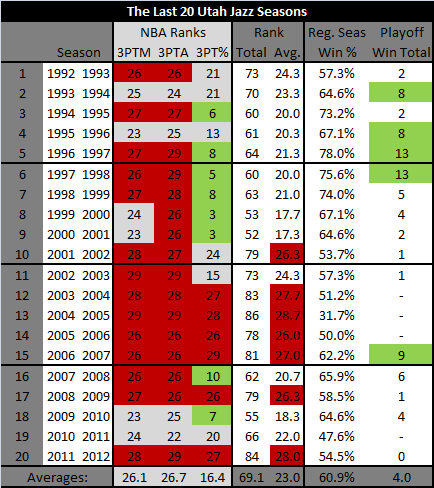 Casually it appears that when we were at our franchises historical peak / Glory Days / Golden Age -- we were still not taking a lot of threes. However, we were MAKING the threes we took. In fact there is only one instance of us going far in the playoffs while being horrible from three -- and that was honestly due to the Golden State Warriors being able to troll the Dallas Mavericks. (We're not going to the west finals by getting over Dallas. We can admit that now.) On the flip side, there are 6 times when we weren't horrible at threes where we didn't get to the Western Conference finals.

Which is the more curious point? Does our Houston 7 gamer / Golden State 5 gamer playoff salvo to the West finals mean more than the other years where we couldn't get by the Lakers? Which idea is more invalidated? Which idea is most validated?

C) Three pointers are not the only thing that matters, if you make them but still play a better team, you'll lose.

Variable: Jazz winning 8 or more playoff games in a season

In the last 20 seasons this has happened only 5 times. In terms of three point shooting, the Jazz average NBA ranks are still low -- 25.4th Best in 3PTM, 26.6th Best in 3PTA . . . however we do seem to be just about average at making them. Our 3PT% rank is 15.2th best in the NBA, on average, for these five successful seasons. The Jazz average rank is 22.4, which is clear if you are a visual person (there's a whole lot less maroon in that table).

The Jazz average 10.2 playoff wins over this period, and the Jazz had an average regular season winning percentage of 69.5%. That's winning 57 games in a year. There is no argument that there is a relationship between being a good regular season club and actually being a good playoff club. Very few teams that suck in the regular season win 10.2 games in the playoffs on average. You have to be a good team to win tough games, and advance. How much did three point shooting come into play? Well, I did not go through each boxscore in the playoffs -- but it is clear that these teams were right there (average) in terms of three point making. In our finals years the Jazz were the #8th best 3PT% team, and #5 best 3PT% team.

There can be some doubt about how much of an affect those long bombs had, but let's not forget John Stockton using a three to sent the Utah Jazz to the NBA Finals. The three was a useful weapon in our glory years, even if it was under-used.

We didn't use it (or have it) in that 2006-07 run past the Houston Rockets and Golden State Warriors -- but it sure would have come in handy against the San Antonio Spurs.

How do things change when the Jazz are good at threes? Well . . . 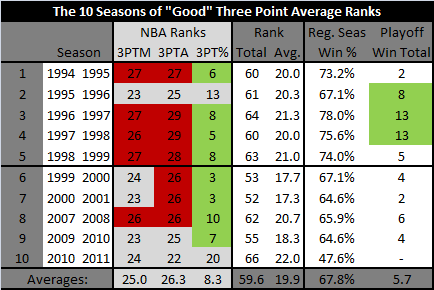 The major difference is in playoff wins per season: the previous set was 10.2 wins per playoffs; this one is only 5.7 wins per playoffs on average. Being great at threes alone doesn't equate to automatic playoff success.

That said, the previous data set showed that being at least average at making threes had some sort of relationship with being a GOOD team. (Someone who has a lot of time on their hands should figure out what the average ranks for all Final Four NBA teams are, for the last 25 years). Looking at the first variable (pure winning) against the second variable (pure three point success) gives us some ideas.

The two groups are similar. The main differences are that the one that's just pure winning (n=5) was average at making threes, while the pure three point success group (n=10) had a very high regular season winning percentage, was Top 10 overall in making threes, but performed worse on average in the playoffs.

Variable: Being horrible at threes

I got your null hypothesis right here . . .

When we are horrible at threes (basically all maroon cells) we're not so good. 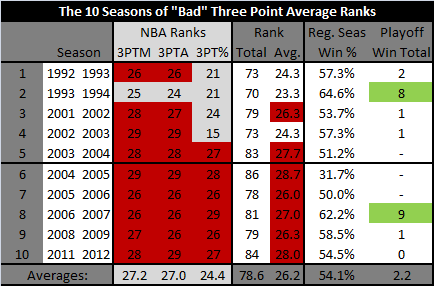 In fact, we're barely finishing the season above .500. This group only won 44.4 games per season on average. These were not good Jazz teams, and over this 10 season set average only 2.2 playoff wins per season. They also did not shoot well from deep. Their makes and takes were both lower than the 20 year average, and their 3PT% ranking was abysmal. Adding it all up it was an average NBA Rank at threes of 26.2 out of 30. This is not good, it's over 6 spots worse than the "good" shooting group.

The point we do not know is how much of an affect bad shooting from outside hurt these 10 Jazz teams. Was the poor three point % a condition of being a bad team, or merely a symptom of being a bad team? Two of these 10 teams did win 8 or more playoff games though. One of them (1993-1994) was right on the cusp (the condition for being a good shooting team was an aggregate three point rank of 23.0 to 17.0, and they were at 23.3). They also won 65% of their regular season games. They were a good team that just barely was lumped as a bad shooting squad. The other (2006-2007) was the amazing, lucky Jazz team that beat Houston in a Game 7 on their floor, then wiped the floor with the Cinderella Golden State Warriors. I think the conditions the Jazz needed to win those 9 games make the 2006-2007 season the exception, not the rule.

The rule seems to be that good teams can make their threes, even if they do not take a lot of them.

Well, regardless of the situation the Jazz just don't take many threes. Maybe we should take more, maybe we should not. I do not know. I do know that if we get more guys on the team who CAN make them, that diversifying our offense a little more isn't going to sink us. It may help us stay afloat. In that elimination Game 4 last year when we made our big comeback . . . you kind of had the feeling that if we were able to make a three in that fourth quarter we may have turned the tide and won that game. We didn't have a trailing Hornacek to make that three. We didn't have a B-Russ to get open and shoot with confidence. We didn't have a Korver to sneak around and get the ball on a rotation. We didn't have a Stockton to pull up on a semi break. We didn't have Memo's money. Our bests teams have had those guys and those types of plays.

Our best teams are the teams that can make threes. Even if we're not Top 10, we're average (ranked #15 or so) -- and these numbers are evidence of some type of relationship. It's not causation, it is correlation. And last year was one of the worst years every for the Jazz in terms of making, taking, or whatever you want from deep. Our ranks were #28, #29, and #27. The only year in the last 20 where we were worse was 2004-2005 -- aka, the year before D-Will, when we had Milt Palacio starting.

Having a few good three point makers on our squad last year doesn't make us go to the WCF. But it may have allowed us to be a #7 or #6 seed in the West. That alone would have been worth it.

Kevin O'Connor brought in three guys who can make threes. It should make a difference. Gordo should be out of his slump now. Alec will continue to improve. And DeMarre wants to be the next Bruce Bowen. Even if we do not up the # of threes we take a game (though I think we will), we now are better able to actually make the ones we take.

And I think that while the nature of the relationship between Jazz success playing Jazz ball in the playoffs and three point ability is not clear, that there is a relationship there. To come more into line with the modern era of NBA ball, we should nurture this relationship. (I'm sending valentine's day cards to Mo Williams, Marvin Williams, Kevin Murphy, Gordon Hayward, Alec Burks, DeMarre Carroll, and maybe Paul Millsap just in case . . . )