Utah Jazz Roster: Improving Internally and the probabilities of stardom

Share All sharing options for: Utah Jazz Roster: Improving Internally and the probabilities of stardom

I have been looking at the Utah Jazz roster over and over again. I think that there is a lot of uncertainty about our future, despite the glowing assessments of both our cap space and youth. The team we are today is not going to be the team we are at this stage next season. And the team we are one year from today could be shaken up again by that following trade dead line.

Because we currently do not have any long term contracts, and we are right now backed into a corner with NEEDING our youth to either a) meet the projections worthy of their draft position, or b) be good enough to trade away for someone who WILL help us win games.

While I have been a champion of our youth for a while, I need to also admit that right now there is no guarantee that things are going to be great. While there is no guarantee, there are things called probabilities. Probabilities are not the same thing as possibilities - after all, the probabilities at 82games.com hold that over a 20 season sample size, the #48th pick in the draft has a 10% chance to be a star. We know that it not really possible though, we were just lucky to have Manu Ginobili be drafted at that spot during the selected number of seasons.

We need our youth to get better, but we also need our current crop of over-achieving veterans to remain with the team. Even if they never become stars. After the jump: a look at the entire roster, how many miles they have on their legs, and a full break down of their actual career averages against the predicted averages for their draft spot.

In the previous post we took a quick look at the groupings of our players. There were two main clusters -- older guys who were not lotto picks, and younger guys who are. Over all there appears to be balance; however you can't replace experience with inexperience and expect the enthusiasm of the youth to make up the difference.

Here's it is again, if you missed it: 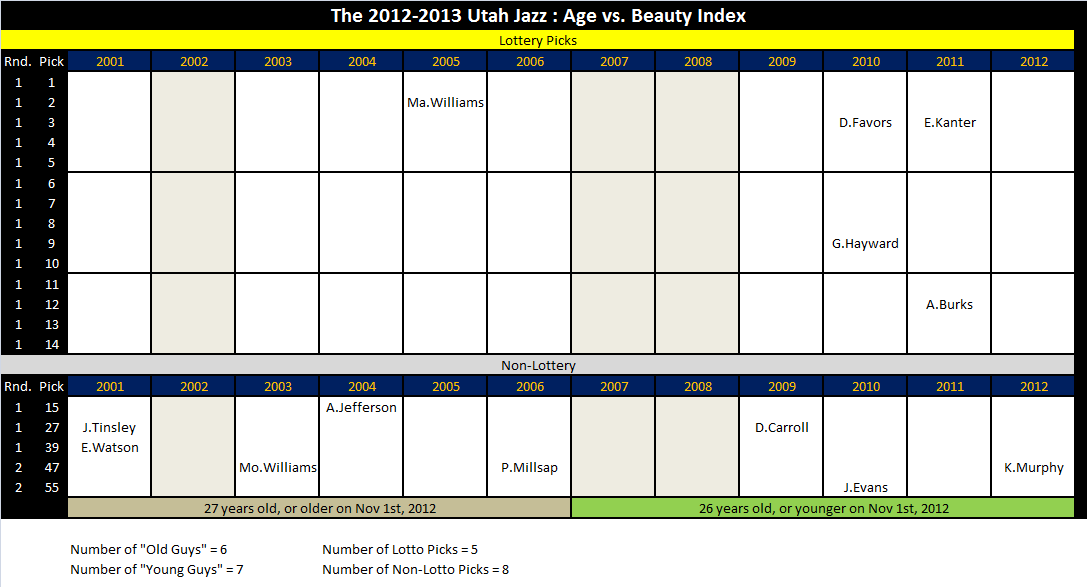 Let's actually go deeper and look at our entire team, and focus on their ages, NBA experience, career total games and minutes (regular season and playoffs combined) -- and lastly -- how many years they have left on their contract.

We really are two different teams. One veteran one, and one young one. And it's really the contract part that worries me the most. That's where the most uncertainty comes from. Outside of Marvin, everyone else who has played more than 3,500 career minutes could be off the team. That is frighting.

A good value for your pick?

Our most recent lotto guys are super young and inexperienced. We're not going to know if they are stars or busts for a while. Right now it looks like they ALL are pretty solid players, but it's too soon to make a bold statement. What we can do, however, is look at the data. I've previously looked at and averaged the statistics for each draft spot over the last 30 seasons of that draft spot. I only did it for the #3, #9, #12, and #47 spots though. At 82games.com they did this for all 60 draft spots, but only for 20 seasons. They have a smaller sample size, but more data overall. You can check it here. The other "problem" is that the data is not recent. It's for 1989 to 2008. Not a big deal. We're not looking at actuals right now, but averages.

The left side are the actual averages from Roland Beech's work. On the right side we have the accurate averages for the players we have at those spots (regular season and playoffs combined; and in the case of more than one player at a draft spot, then it is all summed first before being averaged out).

The blue cells are the side that has won. And in the case of ALL the lotto picks on our team, the average lotto pick for that draft spot did better than the actual player on the Jazz has so far in their career. The flipside is true for all of our non-lotto picks. They all have surpassed the averages for their draft spot. There are two very big points here. The first one is that our lotto guys are just starting their careers (save for Marvin who has, clearly, not made it to his initial draft spot). They will get better. The other, even BIGGER point, is that non-lottery players who are horrible do not stick in the league for long. And in a way, the ones who do stick in this league are the ones who perform better. We have 7 non lotto, non-Elevator Evans guys on the team. The number of games for each draft pick number for that group is over 500 games. These guys have collectively been good enough to stick in the league. And they are competing against a larger sample size that also includes a number of busts or worse players.

As a result, both sections are skewed. We do think that our younger dudes will get better though. The hope still exists that our C4 unit will still blow up. (Core 4: Favors, Hayward, Kanter, and Burks). And if we remember how little experience they have, and how much experience we may stand to lose due to our current contract level -- then we really do have to hope that our C4 unit does, indeed, blow up.

The good news is that as high draft picks the probability is in our favor that they do.

The Probabilities of Stardom

First off, out of our five current Utah Jazz players on the roster who are Lottery Picks -- one of them is already closer 7 seasons into his career and clearly a bust for his draft spot. There was only a 25% chance Marvin would be just a solid NBA player, and that is what he is. If he was drafted lower there would be no problem. But again, out of our current 5 lottery picks on the team, one of them is already regarded as not worth of his high draft spot. We have four other dudes who could become a star. Or they all could end up being unworthy.

Here are the probabilities.

The best news is that the #3 spot has a 85% chance to be a star. We have two #3 picks who are both super young. So, we have two shots at one of them being a star, and each one has an individual chance to be a star of 85%. That is something to be happy about. I think we all agree that the most likely candidate for this would be Mr. Favors. At times Kanter looks like he can be one as well. It is important to note that the #3 spot has a better probability for success than the #2 spot.

Hayward has a 3 in 10 chance to be a star as well, but to be conservative I think we can put him at the same level as a Millsap or Big Al for the purpose of this exercise. And that would be a Solid player, not a Star. This means a starter. I think Hayward is already a starter in his second year in the league. Beyond the purpose of this exercise I think Hayward can be a one or two time All-Star (after things clear up a bit in the West and some old guys retire). His probabilities are really all over the place though for his draft selection spot of #9.

Burks, by the probabilities, has a 70% chance to end up as a role player, or deep bench dude. He only has a 20% chance to be better. I think Burks is better. He's the type of guy who who has the motivation to potentially be great. I think he will be. But I am also nuts, and possibly over-value getting to the line and scoring efficiently.

Rounding out the rest of our younger guys:

I do think that some of our older guys are winding down (go back up to see their total career minutes played values). Some of our guys are at their peaks, however I do not expect Al, Mo, or Sap to take that next step to become a Star player right now. (I figure there are only 15-20 true Star players in the league).

While these are just probabilities, I think with what we've seen on the court there are reasons to believe that things are going to get better for our C4 unit. The raw probabilities suggest that for all four of them to be either a star or solid there is "only" a 62.5% chance. While the only guy who honestly can't be called solid right now is Kanter, after only two season, 75% of them already are solid. And at least two of them look like they have the potential to be stars. Kanter shows flashes. If we revisit this argument in 2 years I think we'll see that all four of them are either stars or solid. We'll get that 100% while the current probability is only 62.5%.

I think that we have a chance to make some noise with a core of these younger dudes - only if they really DO reach the ideas of capability that we have for them. There is no guarantee of that. We do not need to look beyond Marvin for evidence.

But our team ABSOLUTELY HAS TO BE MORE than just young guys. The dudes who have overachieved are our non-lottery dudes. And those dudes also have the most experience.

There needs to be balance on our squad, actual balance -- not just average balance. Plugging in all the data we look great. Looking at the disparities in age, experience, and potential, it is clear to me that there is still enough to be worried about. We do still have uncertainty. Two years from now? We probably will not. So here's to 2014-15!

We're not quite there yet, but the next few months are going to tell us a lot about our current trajectory for improving internally, and the actualities of stardom -- not just the probabilities.