It's no secret that, about 14 months ago, you wouldn't be wrong in calling the FBI and telling them that I was going to kidnap Nets guard Marshon Brooks. It's also no secret that I'm completely in love with Jazz guard Alec Burks. Both of these dudes are going to be forever linked in at least my mind. (Usually similar-ish players do get linked to guys in their same draft class, it's an unreasonable habit of sports fans . . . the media really milked that CP3/DWill thing quite a bit.) Looking beyond statistics I think we have two guys with chips on their shoulders who fell in the draft outside of both their comfort zones and wildest expectations. They were both guys who measured in the "above three billion standard deviations greater than the norm" at the Chicago combine. And they both look to have serious scoring potential.

Who do you think did better in Orlando?

I did not watch every Jazz summer league game, or any but one of the Nets games. That said, during what I did see I did happen to see both of these players doing their 'thing'. Marshon has no leash in these types of games and was completely free, uninhibited by structure, to shoot as much as he wanted. He also drove a lot, and found his team mates. Alec has to play within a system, and that has the positive and negatives that just don't exist in Brooklyn. 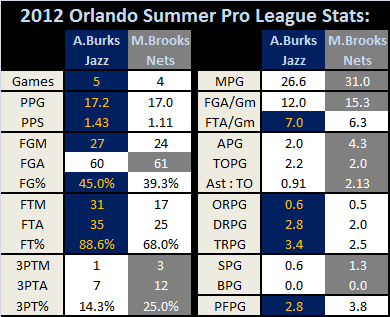 Alec played his game, and Mashon did too. And their games are contrasts of one another. Brooks thinks, Kobe Bryant like, that he is perpetually hot, and that he can hit from anywhere. With that style of play you get a lot of fundamentally poor shots. If they go in it's hard to argue, but he only shot 39.3 fg% - in the summer league against guys who aren't even going to make it IN the league. He did have the freedom to create more, and he had a 4.3 apg average, and a 2.13 to 1 assist to turn over ratio. He plays the game of basketball in it's purest forms of liberty.

Burks, on the other hand, is honed like a dagger - he looks to attack and pierce the defense. He's not a great outside shooter (Brooks isn't either -- but Brooks imagines that he is), so he doesn't go out of his way to shoot deep shots. Burks did shoot horribly from deep, 14.3%. He did shoot great from the line (88.6 ft%), and had a Karl Malone like PPS value (Malone was a 1.40 points per shot dude). Alec played less minutes but scored more while shooting less. He did have more turn overs than assists. That's not good, but did his work on the glass.

In the end it was a battle of efficiency and rebounding vs. offensive inhibition and passing.

The Jazz will need outside shooting and someone to pass, and did not get that from Alec. The Nets, with D-Will and a ton of other guys, don't need another guy to shoot inefficiently, or handle the ball, and that's all Marshon did.

How much do you take out of summer league? How much stock do you put into these 4 or 5 games? It's the only stats we'll have to go on until preseason -- so for me, it is something I have to look at.

I think Burks is the better player, even though I was mad for Marshon. Burks' efficiency speaks to me, but Brooks was capable of doing more things (both good things and bad things) with the ball. Burks won 13 categories to Brooks' 11. So Burks wins, statistically.

Which is fine, because he's already won my heart.

< signs off to write sonnets >