Busting the Myth that Jazz Bigman Enes Kanter is a Bust

Share All sharing options for: Busting the Myth that Jazz Bigman Enes Kanter is a Bust

It was years ago, but it was a moment I'll never forget. It was my first oral exam in physiology, back in my first year in medical school. I was young, and thought I knew it all. I know now that I did not. The first question the head of physiology asked me was "What is the fundamental unit of a muscle?" Clearly the answer was "The Sarcomere." I said as much. It was such a strange exchange to me that I've never been able to get past it. It was a really reductionalist point of thinking. It seemed like it was something so small, something that misses the big picture. It was odd. It was too easy. It's pretty much the first thing in any text book on the sarcomere. But, truly, it's the most essential part.

I try to see the big picture in most all things, but sometimes things get super easy if you do look at the most important part. Let's look at bigmen. There were questions when the Utah Jazz picked Enes Kanter at #3 in the 2011 NBA Draft. I know that I asked questions. We have an idea in our mind of what a #3 draft pick is supposed to be. Will Kanter ever reach that height? Who is to say? What we can worry about is looking at Kanter not against the Michael Jordans or Deron Williams' of the world. But we need to look at him against other rookie bigmen.

And when you look at rebounding as the focus of a bigman's worth -- against his peers and legends alike -- Enes Kanter is far from a bust.

Well, maybe looking at just rebounding is a bad thing if you want a flashy Jordan type with your #3 pick. You know what? There wasn't such a player available at the spot in the year we had that pick. Rebounding isn't sexy. But rebounding helps your team win. And if you are a bigman who rebounds, you stay on the floor. And from that you can build around your strengths to round out your game. And the focal point for all bigs HAS to be rebounding.

I checked out Basketball-Reference.com for players who fit the bill:

And this is the 74 strong player list that popped up. I'm only using 40 players from that list. (Sorry, I don't feel it right to compare Tim Thomas and Keith Closs to Enes Kanter) It is pretty much the Top 25 of that list (minus Nikola Vucevic, Stanley Roberts, and Ed Davis) undisturbed, with the remaining 15 being easily visible NBA Bigmen who had long, successful careers. Kanter's rank here in the list of 40 players is also his exact rank out of the list of 74 players. Keep that in mind.

This first chart shows you ALL the 40 players, listed from top to bottom -- with the critical unit of measurement being total rebounds per game, if that player played 36.0 mpg. I can't help it if Shaq plays all day long, and Kanter only 13 mpg. It's disingenuous to present data like that. Why? Because this exercise is to show how effective a bigman is when he's in the game -- not how high he is on the depth chart. If rebounding is the fundamental unit of a bigman you have to adjust it equally so you can actually see how good or bad a bigman is at being a bigman. 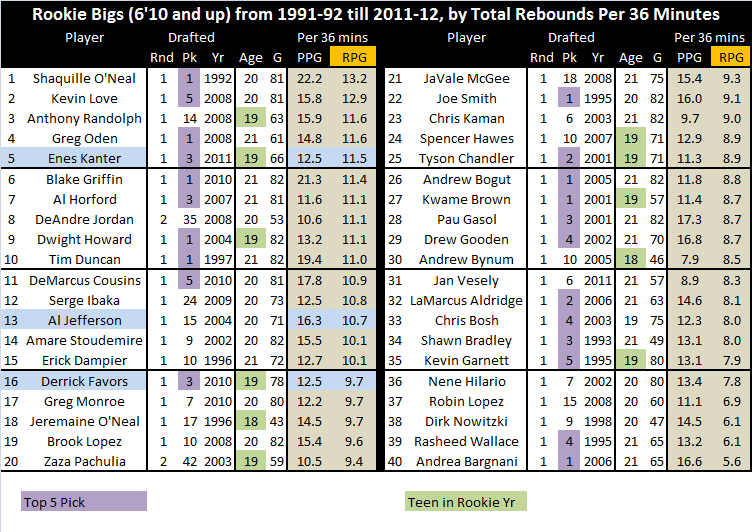 Hmm, Shaq #1. Kevin Love #2. Looks good so far. Whoah, Anthony Randolph #3? Oden at #4 -- well, he was okay in his rookie year. Kanter at #5 -- yes. And the Top 10 is rounded out by Blake Griffin, Al Horford, DeAndre Jordan, Dwight Howard, and Tim Duncan. In terms of their rookie seasons these were all the biggest beasts on the boards. This data makes sense, is valid, and reasonable. The last three guys are Dirk Nowitzki, Rasheed Wallace, and Andrea Bargnani -- all non-traditional, face up bigmen. This also seems to make sense.

Also, Top 5 picks are all over the place. In our mind a Top 5 guy is supposed to be a lock, but the evidence shows that particularly for rookie seasons -- your bigman rookie, Top 5 pick could be great, OR horrible at rebounding.

Taking a look at Enes against different Draft Positions:

Kanter was taken at the #3 spot. He's never NOT going to be linked to his draft position. We just went over how the #3 spot pretty much is the money spot. I don't know if Kanter will ever be a star, but his numbers here in his rookie season don't look so bad compared to the rookie seasons of some super stars.

For his class (#3 picks) Kanter scores less, but boards way more. In fact, Kanter always dominates the glass vs. the average. He's not a strong scorer, but we knew that. And his scoring will get better as he gets more confidence in his different moves and his touch. Right out of the womb (figuratively speaking) he's rebounding better than all the other groups. He's rebounding against men, as a teen, and winning.

Focusing on the Age Groups:

Here is the same data, but condensed and grouped by age groups. Kanter was 19 as a rookie, and take a look at his production vs. the average production of people older than him and younger than him. It's also interesting to note that Kanter has really little basketball experience. Yet he dominated the glass.

As I pointed out earlier, his scoring is down compared to what the older rookies managed, but that was right around the same spot for all other 19 year olds. If you are looking at Kanter apples to apples against his age group you honestly can't call him a bust. You can lie about it and call him a bust too. Some sports media guys get paid to lie, or at the very nicest, obscure information. (Sometimes they obscure information so they don't hurt the team -- we know how that works out well in the courts tho.)

Focusing on just the Teens:

When you look at all the teens in this exercise (n = 12), Kanter is still killing it in terms of rebounds. Only Randolph did better (but, really, he's an anomaly). Kanter is also above average when it comes to scoring, against the rest of the teen group. We focus on what Kanter doesn't do, and the really negative people call him a bust for that. I think we see him, see his size, and we grade him against other NBA veterans. Last year he just turned 19 years old. This next season he'll be 20. When compared to other teens (which we should) he doesn't quite look like a bust anymore. After all, if this data makes him a bust, what do you say about guys like KG and Bosh who were the same age, but rebounded 3.5 less boards per 36 minutes? Super busts? No, today we call him All-NBA players. But they started somewhere. As teens. 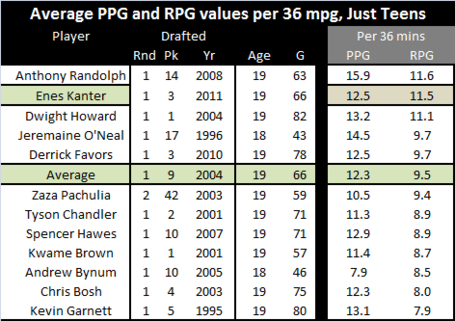 We need to judge Kanter more on being a lotto teen, than as a #3 "he's gotta produce now or be a bust" guy. [As an aside, I think that's part of the problem with Marvin Williams as well -- maybe these two guys can bond about that. Marvin had a ton of expectations on him because of his draft spot, so much so that what he DID do well was never seen as good enough. Dude was a teen too when he joined the NBA.]

Of course, projected RPG over a fixed number of minutes may not mean much if your coach never plays the dude that much . . . sigh . . .

So far so good:

So far it does look like Enes Kanter - a rebound machine - is a bigman who excels at the one major thing all big men need to be able to do. That's rebound. He's young. He was drafted high. He has an NBA ready body. He kills it on the glass. He even has better numbers than some high profile players did in their rookie years.

So why do we call him a bust?

Probably because he's a #3 pick who comes off the bench in real life and doesn't score 20 ppg.

Kanter gets a combined value of 24.0. That's good enough to be between guys like Dwight Howard, Jermaine O'Neal, Serge Ibaka, and LaMarcus Aldridge. If you look at his value (24.0) and then the close range of +/- 2.1 combined points and rebounds you get a range that is, well, very interesting. These are ALL good players, players of value, players who are all rotation guys or starters in the NBA. And Kanter is right in the middle of them. Good for you, Enes.

And lastly, look at all the guys BELOW Kanter that NBA fans think are awesome. A lot of them were younger players who started off in the NBA as rookie teen bigmen. They were allowed to get better, improve their conditioning and confidence, and help their teams win games.

Let's be internally consistent here to allow Kanter the chance to do the same.

If you look at the fundamental unit of the bigman, Kanter cannot be ignored. He's big, he's mean, and while he's not a 20 ppg dude right now (and we say that very few 19 year olds are), he rebounds better than anyone (essentially) not named Kevin Love and Shaq. If those are the only dudes who are really better than you (Randolph and Oden were +0.1 rpg / 36 better) then you are pretty damn good as a bigman.