It is simply frightening when you actually do the math and figure out how many stupid people there are in the world. Lots of people need to be educated beyond their provincialism and ignorance on so many topics -- few topics are as easy to understand as John Stockton being the most dominating PG of his era (which is from the MIDDLE of Showtime Lakers to the the first Lake Show three peat -- or 20 years), not named Earvin Magic Johnson. Isiah Thomas has rings because he captained a way better team. Gary Payton sold jerseys because he was marketed. Steve Nash has MVP trophies because he played very well, for a long time. Though the trophies he won were for the exact reasons why Stockton didn't win any - they just flipped the criterion. And Jason Kidd? Kidd is great at barely scoring 10 points a game while fighting for 9+ rebounds.

Payton, Nash, and Kidd all of them share a common quality. They are all routinely called better than John Stockton by idiots. And they also share the honor of all being worse than him, over the course of their careers. I'm not even going to bring up being #1 all time in the two things you want your point guard to do (set up your team, and stop dribble penetration -- which is exactly what you do when you get an on-the-ball steal).

Here's how these four players match up over the course of their very long careers as Starting point guards. Only one of them played for just one team though. And only one of them averaged a PER of 20 or above FOR SIXTEEN STRAIGHT SEASONS. 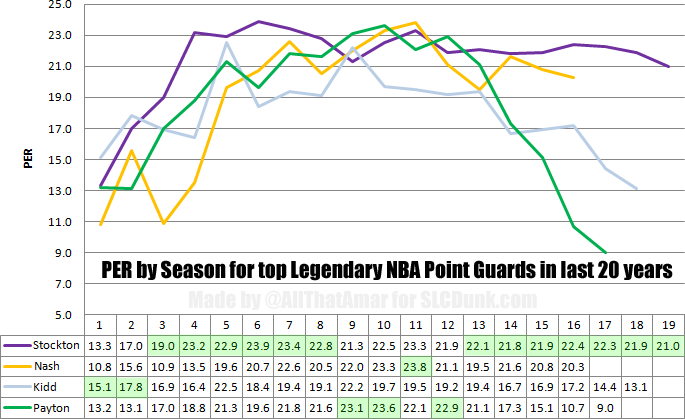 John Stockton. If you didn't know he was better than these guys put down your over priced shoe catalog basketball magazine and look at the NBA history books.