BDL's Freeman does good by learning about Utah, but what can we Jazz fans learn about the rest of the NBA?

Share All sharing options for: BDL's Freeman does good by learning about Utah, but what can we Jazz fans learn about the rest of the NBA?

If you're not familiar with the situation . . . on Friday Yahoo! Sports' Ball Don't Lie blog regular Eric Freeman posted a HUMOR article that attempted to make fun of the new Jersey Sponsorship news. It was a light article that linked each team with an appropriate business or organization to promote. Shums, he who is everyday-he-be-a-journalisin', tweeted this that got my attention.

Sigh. I was enjoying this until I got to the Utah suggestion. YOU GUYS IT'S FUNNY BECAUSE WHITE PEOPLE. sports.yahoo.com/blogs/nba-ball…

Shums is a funny guy, and a great writer on his own. So I had to check it out to see what the deal was. And the deal for me comes from a different point than what the 'deal' would be for someone else. One could argue that it's facile, unoriginal, and cheap to make the joke Freeman did. For most the offensive part is that "durr, Utah = white people". For me, a Utah Jazz fan who is neither from Utah, nor white, well, the problem was "durr, Jazz fans = must be a) either a Utahn, and b) also must only be white". Both are offensive.

It must frighten and anger other NBA fans to know that the boring layup attempting Jazz have fans who don't have a regional relationship with them, or fans who are not similarly boring 'white' people. After all, only the cool hip teams like the Lakers, Warriors, and Bulls should have diverse fan bases. This is an ancient and invalid stereotype. Anyone who isn't afraid to do a little research could find this out -- after all, the demographics of Salt Lake City (where the Jazz play) has been vastly changing and diversifying over the last few decades. There was a time when you could clearly see the validity in that stereotype. That's not the case anymore. Additionally, if someone is having trouble writing about and to modern Jazz fans all they need to do is talk to one. It's not hard to reach us, the guys and gals who write at SLC Dunk. [Ed note: I removed the actual percentage gender, location, ethnicity, and nationality breakdown. It's significant to note that we are a super diverse group here, but also no need to divulge that type of info here in this forum.] And 100% of us are jazz fans. (I wonder what the breakdown is for a Thunder blog...) Still, the Jazz and the Jazz fan base are seen as monolithic, and Jazz fan diversity is a punch line to an internet joke.

That said, Eric Freeman did engage with Jazz fans and changed his piece accordingly. He did not have to, but given the opportunity to learn from (nay, onslaught from) our hyper sensitive fan base (vs. threats real or imagined) he took it, and did learn. What can we Jazz fans learn about the NBA and how the NBA thinks and feels about our team though?

Freeman's piece (which is worth reading to get a few laughs) can be found here. It's funny and he takes digs at each team. There are 30 NBA teams and it's hard to be an expert on each team, it's also hard to write something punchy, funny, and smart for all 30 teams when you are trying to do a post like this. I understand that. I have a hard time thinking of funny or smart things to say about our own roster, let alone a list twice as long. 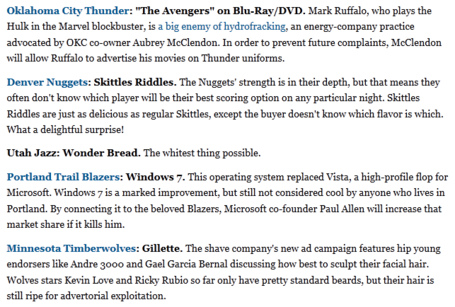 via. the old article at Ball Don't Lie

That said, it looks like Freeman DID do his homework for a number of these teams. If you look at our division alone, he mentions co-owners, movie stars, candy, and other fun stuff. He only really talks about race for one of the teams (he didn't mention a black sponsor for the Pistons, and here in Detroit we're more black by % than Salt Lake City is white by %) - and clearly it seems like Freeman didn't really research the Jazz for this piece. He admits to struggling with what to write, and it's very cool for a writer to share his own feelings and concerns with his own work with the rest of the world. So, while I think I (and other Jazz fans) did not like what he wrote - it's very necessary to commend him for working to fix it. He did do research after talking with us, and changed his piece.

He did not have to do any of that. But he did. We don't need to send him any weaponized molded jello desserts. (Hold on, can I make that joke? Or is that just as bad in taste? Or do I get a pass because it seems like everywhere I go I end up in fights defending the LDS?) The other thing is that, hey, this was a joke. It was a funny post and the intent was never to offend anyone.

Yet some of us Jazz fans (myself almost primarily) did get upset. Freeman, a National writer about the NBA learned that the Jazz fan base is more diverse than previously thought. Did he also learn that Jazz fans can't take jokes?

What can we Jazz fans learn about the rest of the NBA?

Maybe Jazz fans have a lot of paranoia? Or maybe it is an inherent "us vs. them" mentality of being repeatedly disliked, clowned upon, and historically (the people who would make up the Utah Jazz fan core) a people displaced by prejudice? As a Jazz fan who is neither LDS, nor from Utah, I did not know of that past. I had to read about it. America has an iffy past when it comes to dealing with 'the other'. Native Americans, African Americans, Japanese Americans, and Muslim/Arab Americans all know this first hand. I did not know that Mormon Americans were also predated upon. But I do see that been a large root in this perceived 'us vs. them' culture that has grown deep into our Jazz fan base. Somehow Jazz fans became 'the other' in terms of NBA Fans.

Maybe we can move past that natural, life preserving, distrust though -- and join in with the rest of the NBA? I think we are doing that. We can learn that not all NBA blogs are out to get us, even if the talking heads at national tv networks are still ignorant and unreachable.

People still think the Jazz run the pick and roll all day long. I wish we did. Last season only 10.85% of the offensive plays we ran finished with that. (553 ball handler, 287 roll man vs. 7741 total Jazz offensive plays last season - according to mySynergySports.com )

People still think we are boring (it's not boring now, what's boring is watching an iso-heavy offense like the Hawks). It wasn't boring in Andrei Kirilenko's 5x5 days. It wasn't boring in the D-Will era where we had guys like Ronnie Brewer getting dunks and Kyle Korver hitting threes. I guess if there was an era of boring Jazz basketball it would be 2010-11 when Big Al was hitting buzzer beaters to win games. Now we have our C4 guys ready to blow up.

It's not what OTHER PEOPLE think about the Jazz that should matter. It should be what WE think about the rest of the NBA. Learning is a two way street. Maybe everyone out there is not out to get us?

One thing is true, though. It's that Utah is still pretty white, even it the diversity for Jazz fans and NBA Fans who go to games in Utah are moving that needle towards a more mixed populace. I spent some time looking at the % of white population for each of the 30 cities that have NBA teams. The Jazz do not play in the most white by % city in the NBA. But they are on the whiter than not side of the average. In fact the North West Division has, on average, the highest white population %. Big surprise there, right?

That said, over the last 5, 10, and 15 years SLC has worked on their diversity. I'm sure if this data was complied by me 20 years ago SLC may have been #1. It's not now (hey Phoenix, you guys are the whitest thing around!). But it's still pretty white.

But there are lots of other things to make a joke on the Jazz about than the color of their skin. Personally, I would have gone with the highest SSRI use per capita, in the US. But see, that's me always trying to bring medicine into things.

Thanks again to Eric Freeman (@FreemanEric ) for taking to time to learn a little more about Utah. The more other NBA writers learn about the Utah Jazz the more precise and funny future articles making fun of us will be! : )