Utah Jazz Playbook: A deeper look into the difference between Devin Harris and Mo Williams . . . from deep

Share All sharing options for: Utah Jazz Playbook: A deeper look into the difference between Devin Harris and Mo Williams . . . from deep

This summer has been going pretty quickly. Or it as for me at least as I took a 2 week holiday and I'm back to work here writing about the Utah Jazz. We made some trades, and effectively moved Devin Harris out to make Mo Williams our new starting point guard. We compared them here, said good bye to Devin here, and hello to Mo here. One of the main themes is that Mo would be a better fit because he can thrive outside of the running game, and that his out side shooting (particularly when the ball rotates to an open dude) would better mesh with our stable of inside scorers.

So, almost implicitly, we do believe that Mo Williams is a superior shooter. Over the last three seasons his percentages seem to support that theory: 38.8 3pt% vs 32.0 3pt%; 87.9 ft% vs. 74.6 ft%, and so on. But there's more to being a good fit than having better numbers on another team . . . . you have to also be superior in the ways our team does things. For example, the Jazz do not run a lot of plays to get a dude open for threes. Only 3.8% of all the threes attempted last year were these "Ray Allen running around guys to get open" threes. So if this is your talent, it's not helpful unless we change our playbook.

Let's go deeper into these numbers . . .

What the Jazz do:

Here are all the different types of threes the Jazz took last season. There's the play type, the play % (how many plays for threes were of this play type), and the conventional information of 3ptm / 3pta, and the 3pt%.

The majority of the threes the Jazz take are spot up threes. These are threes where the man is ready for the shot before the ball gets there, and occur when a team mate dribbles with the ball and elicits defensive help. Then that team mate reverses the ball either to an open man, or to a man who can then quickly pass the ball to the open man. The next most frequently shot three point attempt is in transition. And the disparity between them is high, 68.4% all the way down to 9.4%. Wow. After pick and rolls (in this case the defender goes behind the screen leaving the ball handler open for a three), everything else is hardly ever used.

The only threes we were good at were Spot ups (34% is good now?) and Isolations (34.4%). Aside from that one second chance three pointer, we're under 30% accorss the board.

Devin was a slightly different animal, while the majority of his threes were kick out spot up attempts (still over 60%), his next highest three point attempt type was off of screens (that thing, as a whole we don't do much of). Off of screens (16.4%), Devin actually made 44.7% of his threes. Shouldn't we have done more of these then? Or I guess Big Al is only capable of shooting it on offense, not setting screens. Furthermore, in transition (Stockton was the king of this) was the next most frequently taken three for Devin (12.1%), but he shot poorly here, only 28.6%. The rest of the threes Devin took were at a pretty good rate (between 35 and 38 3pt%), but hardly used at all (under 5% of his total attempts).

Devin was a good three point shooter on spot ups and off of screens. In transition he wasn't so hot. He was better in isolations than on pick and rolls.

Mo came off the bench for the Clippers, so take his numbers with a grain of salt. He did shoot well, though.Only about 50% of Mo's threes were spot ups (compared to over 60% for both Devin and the Jazz team as a whole). After that Mo's top three point attempts also came in transition and off of screens. The difference was that while Harris did well off of screens he was horrible in transition. Mo was remarkable in both. Combing the two Harris went 25 for 66, which is 37.9%. Mo went 32 for 75, which is 42.7%.

Mo always was above 40% in Spot ups. In the ways Harris took threes, Mo was better. I guess that's what we were looking for. It would have been useless if Mo was great at threes that the Jazz did not take. The Jazz, as a whole do not take a lot of isolations or threes off screens. But in the ways Harris took them (as the starting PG), Mo took them and did them better.

This is an upgrade.

This first graph shows the percentage of all the threes that are different types. Jazz in purple, Harris in that orangy-yellow, and Mo in the green. 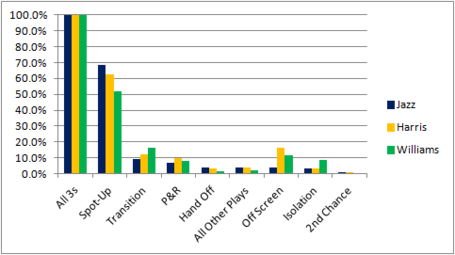 The PGs both took more % of their three point attempts as off-screen attempts than the overall Jazz average. I can only expect that to continue for next season onwards. Harris took more shots out of a pick and roll. Williams took more in transition. 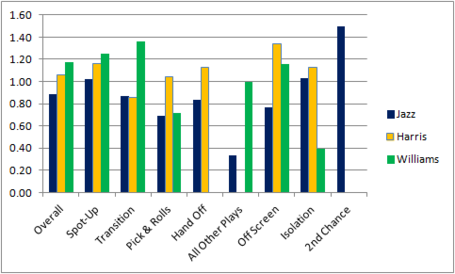 Mo was inferior off of screens and in isolations, However, he proves his mettle elsewhere. What we really care about is Overall, Spot-Ups, Transition, and Off-Screens.

The easiest shots in the game are in transition. The defense has the worst chance of success, and people who move will without the ball can find open spots. I don't know how great Mo Williams is on the pull-up-jumper in transition. But if Gordon Hayward and Alec Burks are running the break, Mo can easily slip open or trail, and be open. And when open he makes these shots. It would add an element to our team that we've sorely missed since pre-injury Mehmet Okur.

That's Mo's best shot, and our worst (out of the three we usually take). This is how Mo helps us. Not just by being an implicitly better three point shooter. But because he does what we need him to do better than the guys already on the team.