Last night, Ric Bucher reported (confirmed by other reputable types) that the Utah Jazz have signed Clippers guard Randy Foye to a 1 year deal. Jerry Zgoda then gave a dollar amount: $2.5 million for the 1 year. I and the rest of the SLCDunk team will have lots more coverage of this signing (you know Amar is just ecstatic about the chance to write 50 more articles about each aspect of Foye's game), but I wanted to look a little bit at the signing in this Downbeat.

If he was signed to be a backup PG, I agree with Locke: He's a tremendous offensive upgrade. Watson and Tinsley were both pretty bad last year in terms of offensive efficiency(~10 PERs), whereas Foye's 3s made him somewhat efficient(~13 PER). Even if he has to change his role to be a PG, he showed an ability to play that position better than Watson and Tinsley did when he was a PG with Minnesota and Washington. Defensive stats are more complicated, and so a look at that will be saved for a later post.

On the other hand, that would mean a very small role for either Watson or Tinsley, and basically no role for the other. Why did we pick up Tinsley's option? Is Earl on the phone with his agent right now? Mysteries are everywhere.

On the other hand, what if he was signed to play primarily as a SG, in the same role he has played for the Clippers the last two years of his career?

While the rotation at the SG is somewhat thin, there just aren't very many minutes to go around, assuming you want Burks to get more playing time than last year. Meanwhile, every year of his career, Foye has played 23 MPG or more. If Foye plays most of his time at the 2, that means Hayward has to spend most of his time at the 3 (also sharing with Marvin), which means Millsap spends all of his time at the 4, which means, well, we're in the same bummer of a situation we were in last year: either Millsap, Favors, Al, or Kanter doesn't get to play anywhere close to enough.

Probably the most ideal mix of these two scenarios, from a statistical point of view, is to begin playing Foye at backup point, taking no minutes away from Burks/Hayward/Mo/Marvin/Millsap (all better players right now). Then, if one of them goes down with injury, his flexibility allows the Jazz to adjust and fill those minutes lost with an approximately average performance.

It is imperative Corbin realizes this, though. Otherwise the Jazz have subjected themselves to subtraction by addition, something we've experienced far too much of recently.

Jeremy Evans is one cool dude. He has been traveling on the annual Junior Jazz Utah Road Trip, where him and Junior Jazz higher-ups (an oxymoron indeed) travel around random Utah towns that no one has really heard of. The purpose? To spread this game called basketball, to spread Jazz fandom to all corners of the state, and primarily make the little kids jealous of his ability to dunk while sadly they cannot.

This week, he wrote a blog post about his experience on week 1 on the trip. Check it out here. 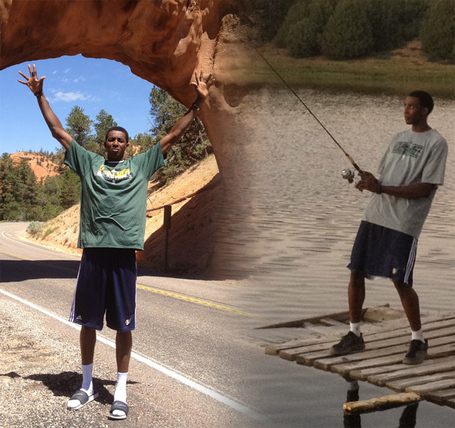 Apparently, he's now attended every national park in Utah, fished multiple times (it doesn't sound like he was particularly successful), and did pushups.

His two life lessons, for all you internet-bound Utah Jazz Junior Fan Kids:

Then just yesterday, the Jazz released that Derrick Favors would be attending Week 2 of the crazy Junior Jazz tour. My first thought, of course, is that Favors should probably be too good for this. Isn't this why we get 2nd round picks? To send them on crazy tours of rural Utah where they share their life lessons from completely different upbringings to excited kids? Indeed, the press release itself seems aware of this, saying:

Former Jazz greats Karl Malone and John Stockton are among the numerous Jazz players to have participated in the Junior Jazz trips over the years.

In order to follow in their footsteps, he must learn from the ways of the rural Utahns. It was their wisdom that allowed Stockton to Malone to truly flourish in the hard life of the NBA.

But, for you Favors Fanatics in rural Utah, here's the schedule of where Favors will be:

13 towns in 5 days! It's absurd, really. But nevertheless, Favors will do it. If Favors really is the next Jazz superstar, well, he'll have a better attitude about Jazz events than the last one (Deron Williams).

In many weeks past, I have subjected you to long, epic, 3000 word Downbeats. This tends to bore some people, and frustrate others, as I knock several other interesting posts way down the page. This also tends to drive me insane as I write until 4 in the morning.

Good news, then! This Downbeat is less than 1000 words! This means you can expect more posts later in the week from me, covering the Foye signing as well as other topics of interest (Shan Foster, Michael Stockton, Peter Fehse?). There is no limit to the number of non-NBA-caliber players I can write about!

This does mean that I need to wrap up, which means I'm going to do one of the bloggiest things ever: ask you for your opinions below. Vote, comment, or do both.