Jazz Off-Season Transaction: Randy Foye Officially signs - but is he a PG, SG, or Combo guard?

Share All sharing options for: Jazz Off-Season Transaction: Randy Foye Officially signs - but is he a PG, SG, or Combo guard?

The Utah Jazz have officially signed guard Randy Foye to a contract. You may not remember him as being a lottery pick (picked #7, higher than Gordon Hayward and Alec Burks, by the way), waa-aay back in the 2006 NBA Draft. He was picked ahead of people like Rudy Gay, J.J. Redick, Thabo Sefolosha, Ronnie Brewer, Rajon Rondo, and Kyle Lowry. You could argue that all of those guys are better than him, or have had better careers. Maybe, maybe not. Foye has bounced around to play for the Minnesota Timberwolves, Washington Wizards, and the Los Angeles Clippers. He finally gets to play for a real franchise now with the Jazz.

In a way he's similar to Marvin Williams who was drafted too high, did not live up to his draft spot, and played for years outside of his comfort zone and in an offense that was not built for his talents.

On paper this is a great move, as Foye can really knock down the three. He's a career 36.6% shooter from deep who has career averages (n = 389 regular season games) of making 1.3 threes a game. (Last season he, on any given game, went 2.0 for 5.1 from deep) One of his greatest talents is one of our greatest embarrassments. Even if we don't take more threes, we need to make the ones we do take - some nerdy guy did a whole long post on that, and the last 20 years of Jazz ball . . .

Foye was drafted as a PG, but seems to be moving away from being a PG and turning into a SG. He became, almost exclusively, a SG last season -- but part of that had to do with the fact that a) his coach was Vinny Del Negro, and b) he was behind Chris Paul, Chauncey Billups, and Mo Williams last year. And also c) that team had like ZERO shooting guards -- someone had to play it. 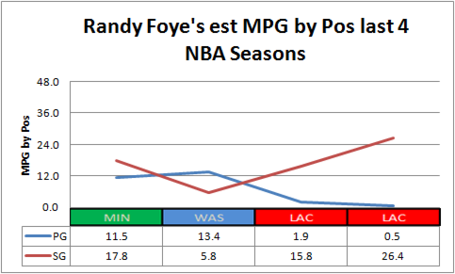 Well, yeah, it seems like any actual PG play in Foye has been extinguished. Tyrone Corbin will, no doubt, try to bring some of that back. Why? Because with the addition of Marvin Williams and the need to play Paul Millsap somewhere (even at the three in a big lineup), we need to play Hayward and Burks somewhere. And they will have to be at least part time at the 2. Getting Foye minutes at the 1 will be necessary. Especially because EVERYONE ON THE TEAM (ALMOST) IS IN A CONTRACT YEAR.

This year is going to be crazy. Especially if we see a lot of Foye at the 2. We are though. I just know it. So the next post I'm going to do that goes into Foye will be comparing him against C.J. Miles (this signing means we're FOR SURE not bringing him back), Raja Bell, and Alec Burks. In my mind Foye is a combo guard. Bell is a three point threat pure shooting guard. Miles is a swingman who can play SG and SF. and Burks is a hopeful combo guard who goes between SG and PG. The data on that is VERY telling.

Anyway, Foye is ours. You can check him out on twitter @RandyFoye, and check back here for LOTS more info on all of this.