Jazz Rotation: Are Mo Williams and Randy Foye, as a backcourt, lesser than the sum of their individual parts?

Share All sharing options for: Jazz Rotation: Are Mo Williams and Randy Foye, as a backcourt, lesser than the sum of their individual parts?

Our roster is pretty much complete right now. The remaining things that need to be done are: buy out Raja Bell (discussed here); sign second rounder Kevin Murphy (read all about him here); and possibly deal with some of the craziness of starting the next season with 4 PGs and 5 PFs. At least one of those three things is going to happen. After that though, not much else. Well, Kevin O'Connor can really surprise us, we never know what he's doing. We could end up trading Al Jefferson to a sports team in Salt Lake City, India (props to Moni who is an amazing stalker researcher).

Mo Williams is a new addition, we traded for him, and he looks to be our starting point guard next season. Randy Foye is also a new addition, and we signed him as a free agent. He could really sure up our bench, but I'm sure he will have a few opportunities to prove he belongs in the starting lineup. Maybe as a point guard if/when Mo gets injured. Maybe as a shooting guard - just because Tyrone Corbin found his daughter texting Alec Burks. (Again, this is a perfectly fictitious situation, and a joke. I do not even know if Tyrone Corbin has a daughter. Or if Burks even HAS a cell phone. Please don't sue me, Utah Jazz . . . ) [Ed note. Welp . . . ]

Mo Williams and Randy Foye know each other, not just from being competitors. The pair of 'barely under 30' guards (Mo is 29, Randy 28) were also team mates the last two seasons on the Clippers. They've actually played in 79 games together, and over 981 total minutes over the last two regular seasons + playoffs.

How did they do? Well, I know we're going to see them together so I had to look it up. And it looks like they just MAY be too similar in game to be an effective tandem. They look like they are lesser than the sum of their individual parts.

Mo and Randy, uh, Williams and Foye . . . Morandy Foyillams? MoFo (Thanks again Moni!)? Okay. Well, these two MoFos played together for the Clippers in 2010-11, 2011-12, and in the 2012 Playoffs. Like I said, they played in quite a few minutes together according to all the websites one would visit for this type of thing: StatsCube, Basketball Value, 82Games.com . . .

And while they did play together, they seemed to play better apart. Behold -- their production when together (tog), and separate (sep):

When you sum all the data (and prorate it for the proper number of minutes which data point actually contributed to the whole) you get some interesting totals. They play 12.4 mpg together, and 17.8 mpg separate. Per 36 minutes, though, they score more, and shoot more threes apart; and they dime, rebound, and get to the line more together. Easy as pie, then, right? 3 beats 2, so they are better together than not. 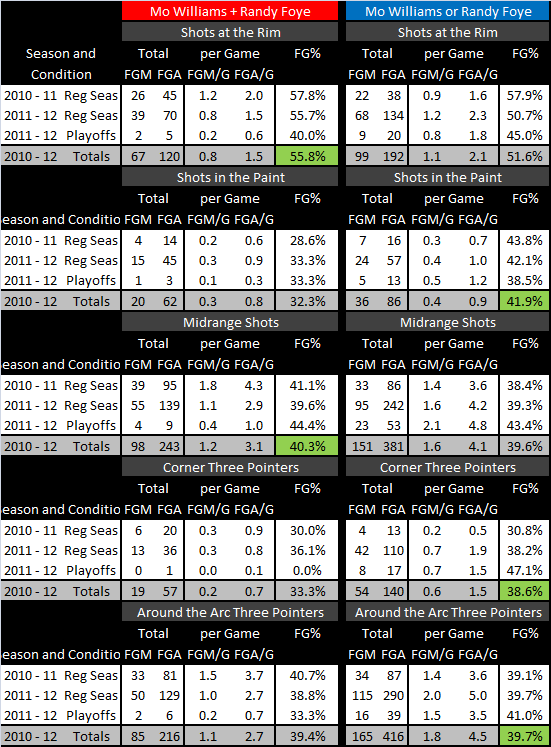 . . . well, they were really only effective together when getting shots at the rim (which are the easiest shots anyway), and still hilariously poor at it. (Tony Parker averages 64% near the rim, almost +10% than these MoFos) They also "won" Midrange shots by being +0.7% better together than apart. They were better from three when only one of them was on the floor, and way better in the paint by themselves as well.

Good players. Can score from anywhere. They have nearly 1000 minutes of experience with one another. Just not terribly effective on offense together.

And, c'mon . . . a back court of Foye and Mo = feeding time for so many other teams. We are going to be treated to these two at parts of the season.

But there's enough data to suggest this isn't their best look. But hey, they do get +0.9 assists in 36 minutes when on the floor together . . . move over Stockton and Hornacek . . .

Are they lesser than the sum of their individual parts?

Yes. Confirmation bias much? I actually can't say. I was hoping that there would be a glimmer of light here that would be an empirical basis for putting out a 6'1 / 6'4 guard line-up in today's NBA. Two PG line ups seem to be all the rage now with Jason Kidd and Jason Terry . . . oh wait. They aren't even together now. I mean Roddy Beaubois and J.J. Barea . . . crap. Same thing.

There are examples where this line up will work. The Timberwolves decimated some teams going with Luke Ridnour and Ricky Rubio. So, if we want to model ourselves after them this potential back court will be great. Or, you know, we can start Mo and Gordon Hayward, and have the advance S.W.A.R.M. back court of Foye and Alec Burks killing other benches and taking turns handling the ball.

Just don't play them together.