Jazz Roster Analysis - Is there a relationship between Team Success and Average Player Draft Position?

Share All sharing options for: Jazz Roster Analysis - Is there a relationship between Team Success and Average Player Draft Position?

A few days ago Moni tweeted me this:

@allthatamar quick post idea: table showing which seasons the jazz had the most top5/10/15 draft picks on their roster. we got 7 right now.

I think that this is an interesting topic -- it really appears as thought we have our "best team" in terms of player's regard as seen in terms of their draft position. No one takes a scrub player they can pick up as an undrafted training camp invite in the Top 10. The people picked high are supposed to be the best players available each year. We do have 7 guys in the Top 15 on our team now: Marvin Williams, Derrick Favors, Enes Kanter, Randy Foye, Gordon Hayward, Alec Burks, and Al Jefferson. How does this stack up to the last 20 years of Utah Jazz history? How does this stack up to the NBA Finalists of this last year: the Oklahoma City Thunder, and the Champion Miami Heat?

[PS. Just so you know, you guys are always free to tweet at me post suggestions. I do take requests. And I am trying my best to get them all done]

Is there a relationship between Performance and Draft Position?

Excuse the Socrates here, but we need to sort this out with words first before we get into numbers. A team is made up of players. While factors like morale, coaching, and cohesion come into play the teams with the best players (or better players) are usually better teams. The best players are usually taken high in the draft. The draft is not a 1 : 1 science though. There are a lot of busts and there are a lot of guys who made good careers from being outside of the first round. There are lots of examples for both of those things.

And these better teams are supposed to perform better.

That is what the reasoning suggests. Is this true? Have there been teams full of cast aways who do well; while collections of high profile talent fail to? Yes. We do not have to look much farther than the New York Knicks - but maybe their problem runs deeper than getting high profile talent. Maybe they just suck, implicitly?

After all, the teams that go to the finals are usually teams with stars on them. And verily, these stars are mostly all high draft picks. The only recent examples of non-super teams making it to the finals in recent memory are the LeBron James led Cavaliers, the Allen Iverson let Sixers, and the Gestalt Blue Collar workers leading the Pistons. Each time, though, that team lost.

You need a team to win. And the best teams end up being things like Shaq and Kobe, or KG, Ray-Ray and the Truth.

These were the best seasons in Jazz history. The Jazz went to the NBA Finals twice, and dominate at home and on the road. Let's take a look at who the Jazz managed to pair up their two HOF line-up with. 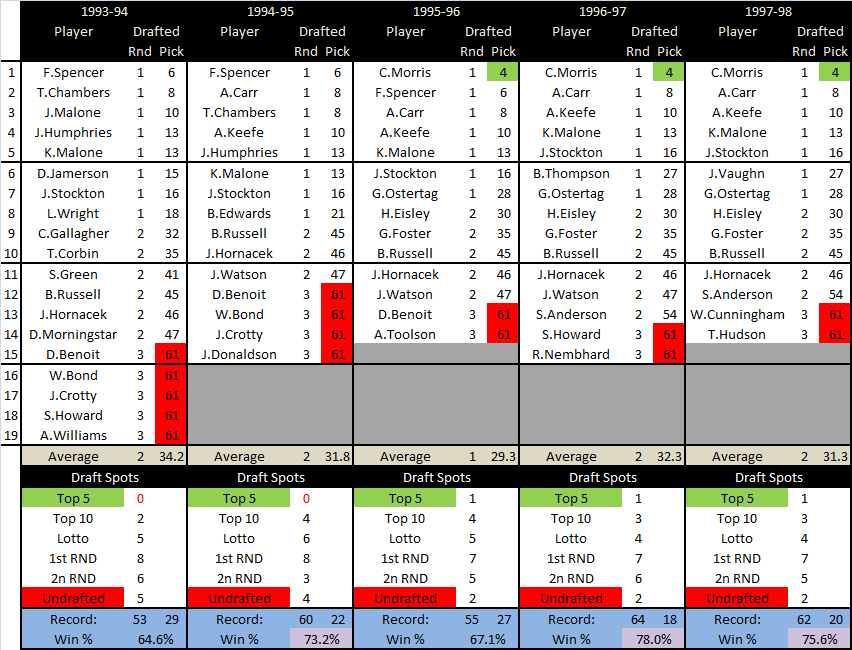 Wow, Felton Spencer was a #6 pick? Chris Morris was a #4 pick? A lot of NBA general managers suck. Our GMs have been good, but I think they did not really strike the metal while it was hot. Look at all the uglies (undrafted of guys drafted beyond the 2nd round) who used to run with Stockton and Malone. (N.B. In some cases a player WAS drafted in one of the since bygone rounds, like Donaldson in the 4th round, but for the purpose of this I still pro-rate him to a #31 pick) While Jordan got to play with Pippen, Kukoc, Rodman and crew . . . John and Karl had Greg Foster and Reuben Nembhard. Nice.

For this group the average draft position is around 30 -- which is a late first rounder. Less than a third of our players were lottery picks (24/77, or 31.1%). John and Karl were miracle workers to get to the finals so many times. Jeff did his part, and Jerry got guys like Russell and Ostertag to help out. But we were under-gunned when we were at our best.

This is the decline of John and Karl. Our team performed worse, and our talent at the top got even smaller and smaller. It's really no surprise that when one third of our roster was undrafted guys we kind of sucked (compared to the previous years) 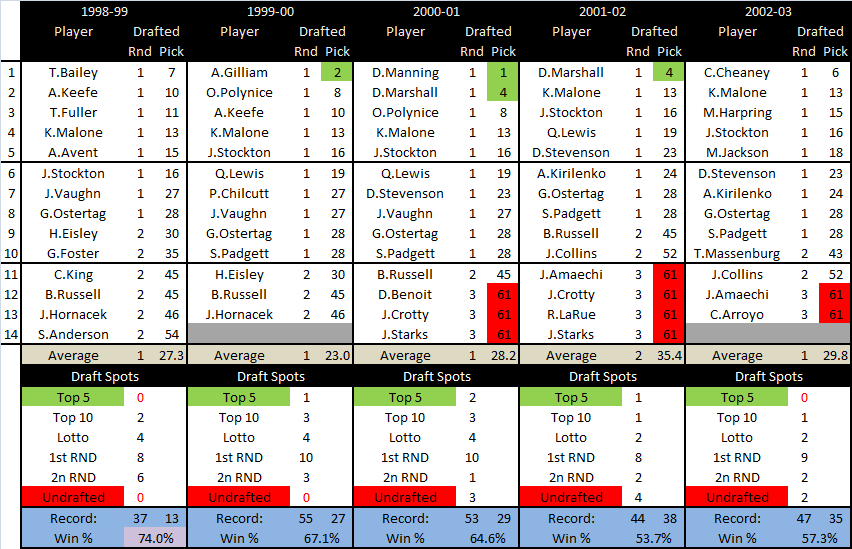 Here the average, though, was mostly under 30 as a draft post. Hovering around that 30 spot seems to be giving our team at least a shot at the playoffs - but we're not really contending. When it was close to 27 we did win 74% of our games. I guess not having sucky players on your team can help you win?

This what that Post-Stockton and Malone era, Andrei Kirilenko got us and a bunch of nobodies to the NBA Playoffs (33.6 average draft spot for our team!), we signed free agents, paid money, sucked, got Deron Williams, and won a lot of regular season games. Our WORST season in terms of win % happened to be the one of the seasons when our roster had a really high average draft spot. We lost a lot of games because Carlos Boozer and AK were out a lot. But we did not have the talent to keep from sinking in their absence. 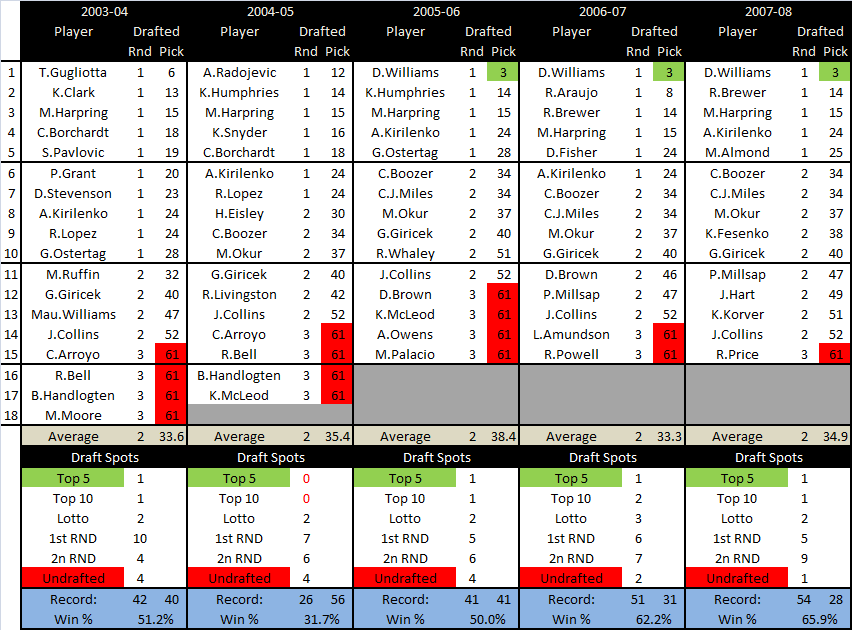 The Jazz started to win again when they started to get better players. It of course, started with Deron Williams.

Here we have the decline of the D-Will era, and our nadir as a franchise where we lost both our star and our HOF coach Jerry Sloan. We're only seeming to move forward now, with a really young lineup. 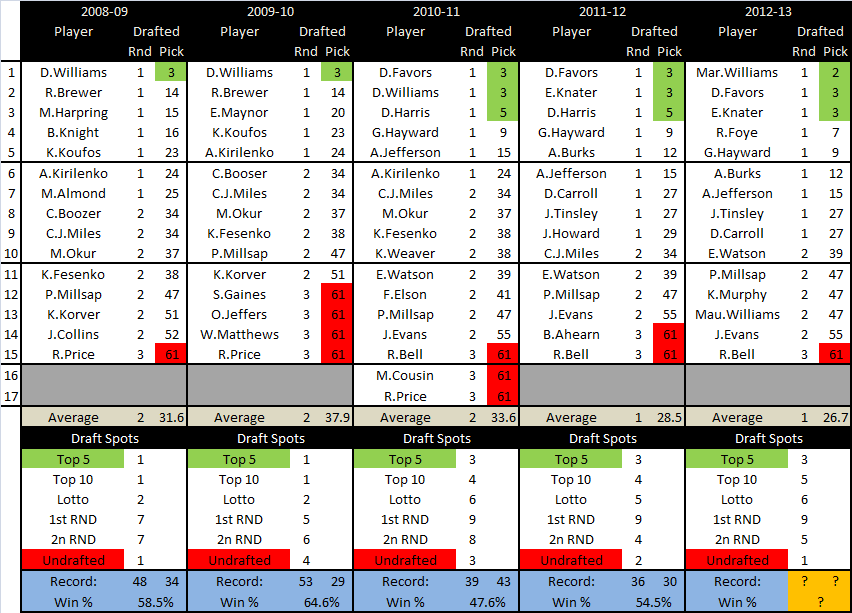 We do have a lot of talent, in terms of draft spot. This should make is a better team because we have better players on it. If we finalize the buyout of Raja Bell we'll even be the first Jazz team to have no undrafted players on it since 1999-00. That team did not go to the NBA finals, but it was still one of the best *ever* Jazz teams in terms of win %, 67.1%.

We are on the upswing. But time will tell how we really end up doing.

I don't understand. Can you show it to me in a graph? 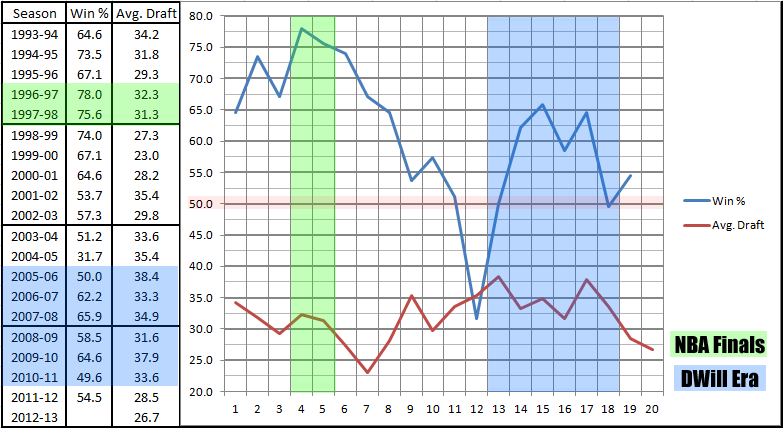 We seem to be in that sweet spot right now, and as a team made up of mostly younger guys, we need to be in that spot. Also notice that when we made our big jump up on the red line (going up with the red line means our team over-all level of being sucky regarded players goes up) our blue line (our win percentage) did not do very well.

This Jazz squad isn't the team with the lowest 20 year average in roster draft spot, but it's close. And as we said earlier, that team wasn't half bad (tied for 6th best ever).

Well, I'm not convinced that needing high draft picks actually leads to success in this, the internet era of media and marketing driving NBA basketball . . . 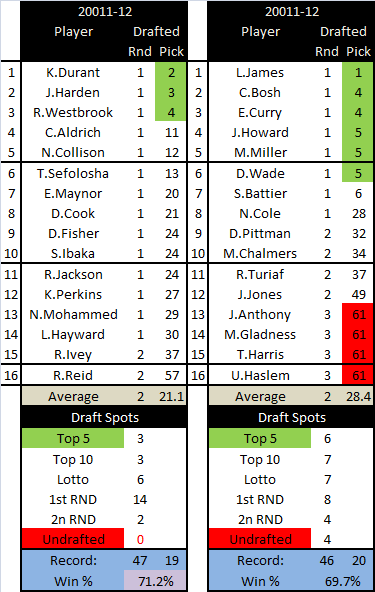 The Jazz, next season, for review are maybe 1 undrafted guy, 3 top 5 picks, and 6 lotto guys. And our average was 26.7. We're on the right path for this era of NBA ball. Hopefully if we mine two of these young guys into HOFers our front office will work overtime to get them the help they need to succeed.

I"m telling you right now I don't want to see Favors and Hayward and freaking Walter Bond and John Crotty types helping them out.