You would have to either have a severe mental problem or just enjoy being wrong to suggest that the 1992 USA Men's Basketball team wasn't the best team ever. They were called the "Dream Team" for a reason, after all. We all have lots of memories from that era. The sports media always goes out of its' way to remind you about Magic Johnson and Larry Bird being elder statesmen, and how Michael Jordan imposed his greatness on a global stage. Beyond that the only other story you hear about is how Charles Barkley was #1 in PPG. Nice. No one seems to mention how Karl Malone was #3 in points, and #1 in rebounds. He wasn't too shabby on the assists and finished #8th, a few shy of Larry Bird. Well, 5 shy. But that's only 0.6 apg behind. N.B. Karl did not play a lot of minutes, but was super effective when he did play. 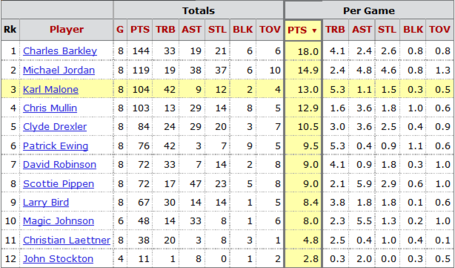 Not bad Karl, not bad. Utah Jazz fans will remember this -- even if the rest of the NBA Media seems to have done so.