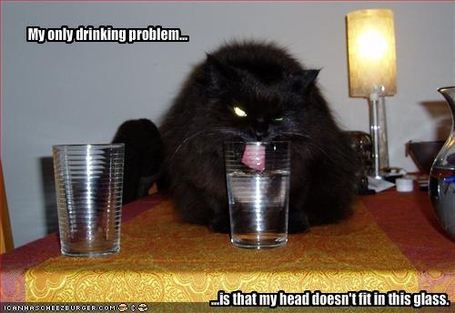 Did Marvin not reach his best because he didn't fit like our feline friend above?

Most every post from Hawks fans that I have heard floating around the internet suggest that he was lazy, disinterested, or just not a hard worker. They seem to cite this as the reason that he didn't perform. However, as I was roaming articles off of draftexpress.com (great site by the way), I found this snippet.

"All of the above are impressive enough, but the most impressive part about Marvin Williams, and we can’t stress this enough, are his intangibles. Ask any of his current or former coaches and they will all tell you Marvin has an incredible attitude, motor, work ethic, and understanding of basketball. His basketball IQ is extremely high (he grew up watching Dean Smith instructional videos). He understands what to do and where to go at all times, and is extremely unselfish. Marvin plays with a passion and desire that is hard to find these days and is very driven but not consumed by basketball. For a player his age, he has shown that he is very mature. The fact that he never once complained about his role or playing time his freshman year and the fact that he understood and embraced his role speak volumes about his maturity. He plays within the team and within his abilities at all times."

This, written back in 2005 when he was drafted, seems to say the exact opposite of what Hawks fans have been saying. Why?

On the other hand, Jazz fans have been claiming that Marvin was in a system that didn't exploit his talents to the fullest. They claim the iso-heavy Hawks offense was what held him back where he was used mostly as a spot-up shooter where he really is much more capable as a slasher. I found this snippet from the same previous article on draftexpress.

"The most developed part of Marvin’s offensive game right now is his almost flawless jumpshot. It’s a very natural shot and he shows great form for his size. His shot looks almost effortless and each shot is nearly identical with his elbow tucked in, arms straight, good follow-through and height. His form looks the same whether it’s a mid-range jumper or a 3 pointer, and he releases it fairly quick. His great leg strength really helps him because he less likely to shoot tired jumpers. Marvin has shown he is a great FT shooter (nearly 85% on almost 5 attempts per game). He is calm and poised at the line and is always confident in the shot.

The few times that Marvin put the ball on the floor toward the basket he showed he has very good handles for a player his size. He displays a low, fast, under control dribble and rarely forces the issue. He provided solid help bringing the ball up the court against full court pressure. Unfortunately for us, Marvin did such a good job playing within the team at Carolina that he didn’t display his ball handling skills often. Marvin does not over dribble and does a good job at keeping the ball moving. He is a very unselfish player and shows great floor instincts in his passing. He was not double-teamed often but he did a pretty good job of passing out of it when help defense arrived. After rebounds he was usually quick in finding Raymond Felton with his outlet passes, helping ignite a tremendous fast break offense."

This seems to suggest that he would perform well as a spot-up shooter. It hints, though, that he has good ball-handling skills and may be able to slash to the basket well. Sadly, I have found no evidence to support either conclusion. I don't have anyway of accessing video to analyze it.

With that in mind, let's discuss! Why do you think Marvin has only achieved a mediocre NBA career? Why has a guy with the size of small center and the speed of a shooting guard not completely taken over the NBA? Post your comments, feelings, videos, ideas, hypotheses, and psychotic hallucinations below.

David Locke posted that out of 58 cuts last year, Marvin Scored on 33 of them (33 out of 54 the previous year). He draws fouls at about a 17% rate. I put the number of free throws for these plays at 1.5 since sometimes it’s an and-1 situation and sometimes it’s 2 free throws. So, taking that information into account with his free throw percentage, I came up with a fudged together estimate of what his ppp for cuts would be.

How does that compare to the jazz last year? Well, from this post http://www.slcdunk.com/2012/4/5/2928729/closer-look-at-the-jazz-offense-cuts it puts him at nearly a Millsapian or Watsonian rate! I think that qualifies as being good at cuts. Even though this is just a rough estimate from what synergy actually has listed, even at 1.13 ppp (his ppp if free throws aren’t counted in) it would place him as just better than Gordon Hayward.

Why hasn't Marvin Williams lived up to his potential?