No doubt you have heard the great news, the news that Jeremy Evans has been signed for non-minimum money. And for three years! Wow! Clark broke the story here. What does $5.5 million mean, per season, over the course of his 3 yr contract? Well, while the full details are as of yet unknown, the simple math means that each season he could be earning $1,833,333. I think that is pretty awesome, because if you remember from a month ago we held a few polls on Evans. I suggested that the Jazz signed Evans for four years at the full contract value of $6.58 million. Instead the Jazz went for three years at $5.50 million. My plan (which was a graded contract including a team option for the last year) would have netted the skinny forward $1,645,300 dollars on average. What is he actually getting? Well, on average, from this $5.5 million deal he'll be getting $1,833,333 dollars on average, per season. Most of us were in agreement that the Jazz would do well to lock Evans up for a bit, at a low rate, even if it is just for the short term. Most of us were also confident that Evans could one day become a rotation player, instead of a carnival side show.

How does Evans' new three year, $5.5 million contract affect the Jazz bottom line? Gotta click below to find out.

The Jazz, honestly, have no space now to really add anyone, aside from the exception. Here, take a look for yourself! 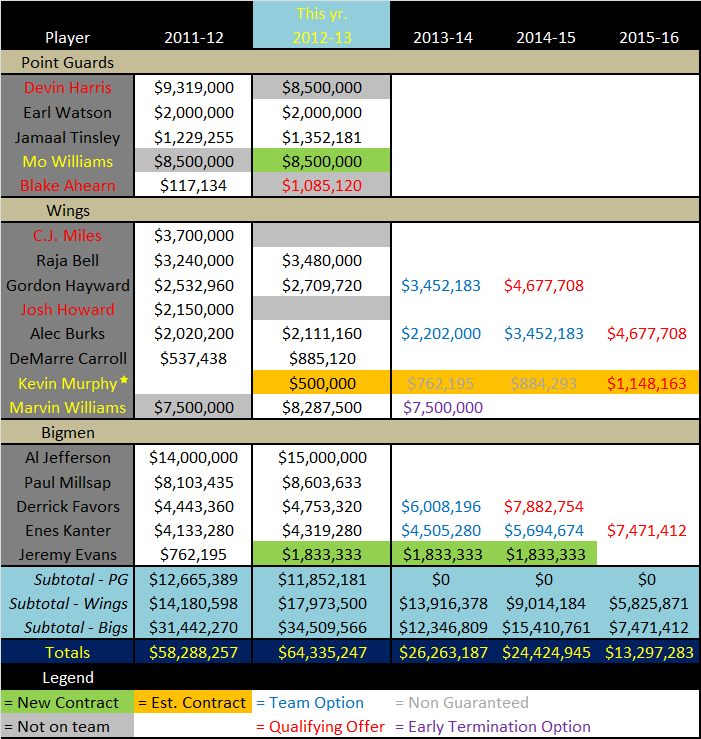 (Yes, I'm a visual person, hence all the different colors)

We are +10.84% over, which is $6.29 million over the cap. The Jazz were only +0.42% over last year (mainly because of our injuries we had to end up going to a full 15 man roster). This is a big jump, and we can point fingers at a few players. Primarily there's the fact that we have four lotto picks on the team, who are cheap-ish now, but lotto picks rookie contracts are still way higher than the 2nd rounders we're used to drafting. Those four guys will cost the Jazz a combined $13.9 million THIS SEASON. (Lotto rookie contracts add up) The next big chunk seems to be Al Jeffersons' crazy $15 million expiring deal (imagine how big his contract would be if he could defend the pick and roll?). Then we have three players in the $8 million plus range (Paul Millsap, Mo Williams, and Marvin Williams). Most reasonably, if the Jazz are going to try to get under the cap this off-season it's not going to be by moving one of these most expensive 8 players. It will be trying to cut some money from the guys like Raja Bell (who is set to make $3.48m this year, which is more than half the value we need to shed).

All that said, if the Jazz were a company, their budget for bigs seems to be disproportionately high. (I guess our bigs are our best players . . . but sheesh!) 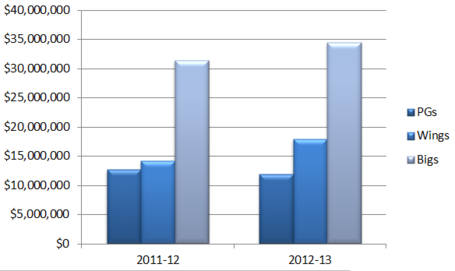 PG's went down, we added Marvin, and our bigs are still getting the biggest piece of the pie. 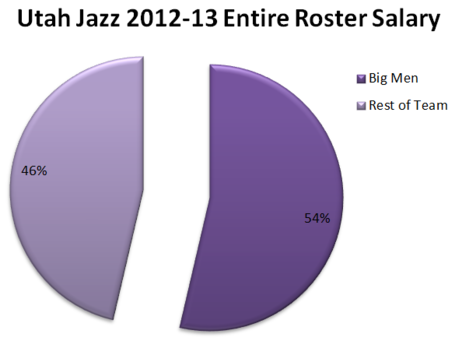 Just to point things out, our bigs are only 5 guys: Al Jefferson, Paul Millsap, Derrick Favors, Enes Kanter, and Jeremy Evans. The shocking thing is that 5/14 = 35.7%. So? Our bigs get the most money. Our offense runs in a similar way where our bigs get the most shots. Not so crazy. Well, more precisely, not so equal (even in the same group), as Big Al will make 8 times as much as Jeremy. But that's also normal, as Big Al is right now, probably, 8 times the basketball player. He also probably eats 8 times as much per day.

This is pretty much our team for next season. Unless, of course, Kevin O'Connor continues to do crazy things. (I didn't think he'd give Jeremy a real contract, and bring back Jamaal and DeMarre both, and make TWO TRADES in short order.) So, I guess what I'm saying is that this is our roster, until more moves happen. And that we're $6.29 million over the cap right now.