You've probably heard the news by now. The Jazz are buying out Raja Bell. Let's dedicate this downbeat to our friend Mr. GQ, starting with this beautiful song that the Boyz II Men wrote for this very occasion.

To buyout or to use the amnesty? I'm sure some of you have asked yourself this question about the Raja Bell situation. Obviously, buying out is the right option, because that's what the Jazz did, but let's discuss the two options. To do this, we have to figure what a buyout and an amnesty provision mean to the Jazz both in real dollars and in salary cap dollars.

Credit to utahjazzblog.com blogger and slcdunk visitor PeterJNovak for the corrections to my CBA knowledge. I had some small mistakes in my explanation. Changes in italics.

Buyout: The team and the player agree to terms that are less than the guaranteed contract, in which the player takes the money and is a free agent and is allowed to sign a new deal with a new team. So the team agrees to pay said amount in real dollars, although all the guaranteed money ($3.4 million) will count against the cap, which shouldn't be an issue for the Jazz.

So let's say the Jazz and Raja Bell agree to a $2 million buyout. Raja's contract is for $3.5 million, but he could agree to take only $2 million from the Jazz to leave. Why would he do that? For one, he wants to leave, and secondly, he can make up most of, or all, of the difference in the buyout and his contract by signing with a new team. If a team signs Raja Bell, they have to pay him $1.35 million for the veteran minimum for a player with 10+ years NBA experience. Also, Raja's cap hit is $3.5 million, so the Jazz save $1.5 million in real US dollars.

Amnesty: If the Jazz used the amnesty provision, they would clear all of Raja's $3.5 million from the cap. That'd be great, except the Jazz would possibly have to pay all of Raja's $3.5 million in real US dollars. A team is allowed to claim Bell and pay some of his contract, but if no team claimed Raja Bell, the Jazz would have to pay Raja all the money he is owed, even if it clears the cap.

Bottom line: if the Jazz don't plan on spending much more money and approaching the luxury tax, they don't have much use for clearing cap money. But the Jazz do have need for saving real American dollars in the deal, so a buyout is the surest way they could achieve this. Details of the buyout will eventually come out, but the Jazz were able to rid themselves of a player who was causing problems, free up a roster spot and save some money.

And Raja Bell will have the opportunity to become a cheerleader for the Heat or Lakers, possibly. Good for all sides.

Okay, that is all of the words I can actually write about Raja Bell. Best of luck Raja. In my opinion, the Jazz had a really good weekend potentially. In the last few days, rumored deals for Ersan Ilyasova and Ryan Anderson have come out and both players are probably going to sign deals for less than $10 million a year. Ilyasova is rumored to be 5 years, $45 million and Ryan Anderson's deal is reportedly for 4 years, $34-36 million. 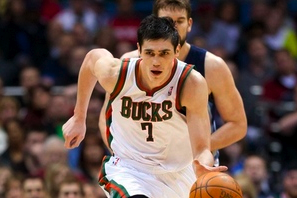 I can't wait for the cinematic biopic on Ilyasova next summer, starring James Franco, called "Ilyasova til it's ova'"

What does this mean for the Jazz? It sets a great market value for both Paul Millsap and Al Jefferson. In my opinion, the Jazz will extend either Paul or Al this summer for 3 more years. Their respective agents are going to attempt to get Al or Paul the biggest contract by pointing to new deals for Gerald Wallace (4 years, $40 million) or Jeff Green (4 years, reportedly $40 million). Paul and Al are arguably equal to or better than those two players. But the Jazz can now counter with the deals for Ilyasova and Anderson, two players who are younger and arguably equal to or better than Paul and Al.

I have heard David Lee's contract mentioned in setting the price for Paul and Al, but I think that is silly. Lee signed his contract under the terms of the last CBA. A lot has changed since then, including the climate of the economics of the NBA. Players contracts are already taking a 6-9% decrease in total money just from the lower share of the pie they are receiving and the lower raises. So if Paul Millsap signs the same contract as David Lee, under this CBA, his extension would be more like 3 years, $33 million, in comparison to David Lee's 6 year, $80 million deal, and that's before factoring in what a horrendous deal the Warriors gave Lee.

So thanks Bucks, Hornets, and all parties involved in working out Ilyasova and Anderson's contracts. The Jazz got a little more leverage in negotiations.

Be sure to set your DVRs to record NBA TV today at 1PM MST (3PM EST) for the Utah Jazz vs. Detroit Pistons game at the Orlando Summer League. Maybe someone knows more about this than I do, but I believe you can live stream the games on NBAtv. I know that you can buy a summer league pass to watch all the summer league games for $14.99, but that is only for the Vegas league, not any of the Orlando games. All I know, is I can't wait to see these guys get some serious minutes. 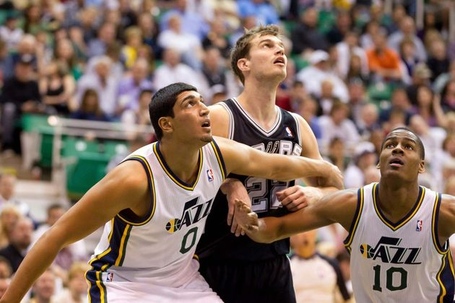 It's been a busy, busy summer for the Jazz. Personally, I think the Jazz are done making moves, except for a possible extension to either Millsap of Jefferson and the signing of one more free agent at $2.5 million a year. Let's assume that the Jazz buyout with Bell is for $2 million. The Jazz's payroll now sits at approximately $59 million after the Harris/Williams deal becomes official. This means the Jazz only have about $8 million realistic dollars to add to the payroll through either another free agent signing or trades, before flying too close to the luxury tax sun. The Mid-Level Exception would add, $5 million to the salary cap. I personally don't see a lot of guys I'd add for the MLE left. I know Courtney Lee is a sexy name, but where does he fit on this roster? How do you get Alec Burks, Gordon Hayward and Courtney Lee adequate minutes when they all ideally fit at the shooting guard?

I think adding a small forward makes more sense. I'd still be very interested in adding Andrei Kirilenko for around $6-7 million. He and Marvin could split time at the 3 and some at the backup 4. Signing AK would certainly cost Demarre Carroll and Jeremy Evans minutes, but I think that is better than cutting into Hayward and Burks' minutes. Maybe you feel differently. Another option could be signing a better back up point guard for half of the MLE. I would support offering Patty Mills half of the MLE to be the backup point guard. He's restricted, but the Spurs would perhaps not match, given the fact they have Gary Neal. Mills is a great scorer off the bench, not much of a passer and a good 3 point shooter.