The NBA off season went and got crazy on us last week with the blockbuster NBA trade that sent Dwight Howard to LA, Andre Iguodala to Denver, and Andrew Bynum to Philadelphia along with other players. When I heard the rumors that it might happen, I didn't blink. With all the collective boys crying wolf about potential Howard trades, I was surprised that the trade actually happened and that it happened relatively swiftly.

Now we get to see how the Lakers do. Personally, I think the Lakers are much improved and will compete for the Western Conference Title, but I think the Thunder are still better. It sucks though, because the Lakers continue to voodoo magic the rest of the league into giving them what they want. You can't convince me that Houston couldn't/didn't make a better offer. Orlando made a bad deal, no matter how you look at it, just like Memphis did back in the day. So if you are a Laker hater, which I am, this sort of stuff is disappointing.

With all of that said, I think this move has little to no affect on the Jazz's chances of winning a title. First of all, Dwight Howard needs to resign in LA, which isn't a given. If the Lakers aren't as good as some think they should be and Dwight clashes with Kobe or the coach or whomever, he isn't going to stay in LA to carry Kobe's dead corpse around the court (Kobe is falling fast) and he'll sign elsewhere. In that case, the Lakers will have dumped Bynum for nothing.

On top of that, the Jazz, barring a fantastic trade or free agent signing in the next 12 months, aren't going to compete for a title until Hayward and Favors are in their 4th year, at least. In two seasons, Kobe, Nash, and Pau will be fading into NBA netherlands, if they are still with the Lakers. The Jazz will be contending for top playoff spots with the Thunder, the Hornets, Clippers, or maybe the Wolves more than the Lakers.

That is unless the Wolves trade Kevin Love to the Lakers for Metta World Peace, 2 second rounders and Devin Ebanks. It'll happen.

One of the things that the writers of this blog discussed over dinner and that needs to be discussed with more Jazz fans is the question "what if the core 4 aren't as good as we hope they are?" This question was a concern, specifically of Andy's and I think it's a great question.

I KNOW that the core 4 aren't as good as some Jazz fans hope because of the expectations I have seen some Jazz fans throw around. I think it's healthy to try to maintain an accurate perspective on the team. So I am going to make a series of provocative statements about the young guys that I think are true and we can discuss them. I'm not trying to cause incite. I agree with the statements I am about to make, although I also believe there is room for these young guys to prove me wrong.

-One of Hayward or Burks is probably not starting level material in the NBA and I doubt they will every both start the majority of games for the Jazz in the same season.

-If Gordon Hayward wants to be more than a borderline starer in the league, he needs to become a more consistent scorer, either by making more 3 point shots or by getting to the line more often.

-Enes Kanter has a long ways to go. He's an elite rebounder, but so is Reggie Evans. There's a chance that the Jazz drafted a non-starter with the 3rd pick.

-Hayward deserved the minutes he got, Burks needs 20-25 mpg and Kanter 15-20 so that the Jazz, and fans, can see what we are dealing with. Right now the Jazz are slowing the development of the team in the long term by limiting the minutes. They have to learn at some point.

You probably noticed that I didn't even mention Derrick Favors. He gets his own section, partly because I feel the most confident in his game being good. I think his floor is higher than Burks, Kanter or Hayward and his ceiling is certainly higher.

Favors has an array of comparisons for sure, but I see so much Tyson Chandler in him. For the record, I would be thrilled if Favors became Chandler's equal defensively and I think he has more potential to be a better scorer.

Coming into the NBA, Chandler is 3 inches taller, but Favors has the longer wingspan and an equal standing reach and weighed 20 pounds more. Both are limited offensively. You can't give either the ball and expect them to create their own offense, but get them around the rim and they are almost unstoppable. His first year with New Orleans Chandler averaged 12 points a game on 62% shooting by just putting him into pick and roll and alley oop situations. Favors is honestly more polished offensively than Chandler. There isn't any reason, if put in the right offensive situation, Favors shouldn't score 15 points a game on 9-10 shots and 55-65% field goal percentage. Offensively, it will be key to see if Favors is able to put up numbers similar to Tyson Chandler by mostly catching passes on the move to the hope and cleaning up offensive putbacks. If the Jazz try to run their offense through him either in the low or high post, I think we will all be disappointed. 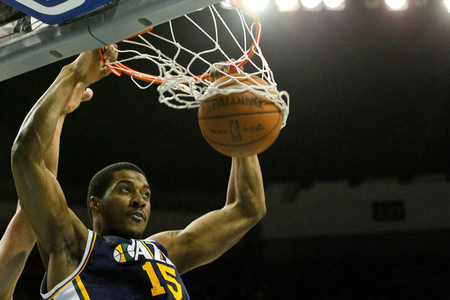 Derrick Favors should be doing this on at least half of his field goal attempts. Mandatory Credit: Derick E. Hingle-US PRESSWIRE

My wife is the daughter of a financial planner and has been raised on good economic principles. I mention this to justify why I was listening to a financial advice radio show on a drive the other day with my wife. Long story short, a caller asked the expert if he would sell a house he owned and rented in order to pay off his own house's mortgage. The expert asked if the owner would borrow against his house to buy this other property and the caller answered "no" rather quickly. Long story short, it was obvious that the caller should sell his property because he would never acquire the property if he had the option of buying.

Financially, the reverse acquisition way of thinking is a great way to evaluate the Jazz players. Let's pretend the Jazz didn't have any players and not committed money on the books but had the option of keeping or cutting the contracts of their players. Obviously the Jazz keep the guys on their rookie contracts. But you are the GM. Would you:

Jefferson at one year $15 million?

Who would be your first cut and who would you keep?

I'd like to implement more podcasts on this site. I love listening to a podcast while cleaning the house or going for a jog, over having to read it, but that might just be me. I know some people can't listen to them at work or whatever. Would a podcast be supported by our readers and secondly, what would you like to hear from a slcdunk podcast if one were to magically exist?