Utah Jazz Continuity and the tale of Paul Millsap

Share All sharing options for: Utah Jazz Continuity and the tale of Paul Millsap

The Utah Jazz have done a great job over the years of retaining players who have both long tenures with the team, and also experience in the playoffs -- particularly with advancing in the playoffs. Well, by over the years I guess I mean "the Stockton and Malone" years. These last few seasons have been defined MOSTLY be turn over. Be it losing our head coach (Jerry Sloan resigning in the middle of the season), trading our best player (Deron Williams), losing our double double guy to free agency (Carlos Boozer), moving our athletic defensive young starter (Ronnie Brewer), not even offering our sharp shooting bench threat a contract (Kyle Korver), or just basically cutting ties with one of the Top 5 most dynamic players in franchise history (Andrei Kirilenko) - our team has been changing quite a bit over the last few seasons. Surprisingly, it has been a funny little sequence of overhaul, slow, painful, and prolonged -- instead of ripping the band aid off. The last time the Jazz went to the Western Conference finals was in 2006-2007. If the season started today this current Jazz team would have only one player from that group on the roster - Paul Millsap. Millsap played the 8th most minutes during that run, and was a major contributor to all of our playoff runs in his career. This alone makes him more important than Al Jefferson. But I'm just biased like that. I love a hard working winner who has been in playoff battles before (on the victorious side) than a guy with a bigger body who made himself a lesser player than a 2nd round pick.

I like the idea of Utah Jazz Continuity. After all, it's a way to pass down the traditions of our team; tell the oral history of our successes; and train the next group. I can only imagine how much better Greg Ostertag would have been if Mark Eaton was on the Jazz during his rookie year. (Just to teach him the tricks of the trade as a Jazz bigman . . . ) Millsap is THE LAST GUY from our post-Stockton-to-Malone era of success. 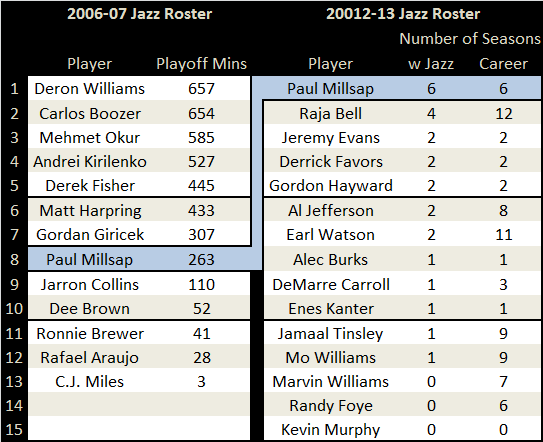 We have a lot of vets on our team, but none of them save for Paul Millsap are "Jazz guys". Mo Williams and Raja Bell played under Jerry Sloan - but never in the playoffs. For continuity to, well, continue, the Jazz need to keep Paul Millsap around.