Ryan Anderson, Our System, and Finding Minutes for Everyone - The Downbeat - #816

Share All sharing options for: Ryan Anderson, Our System, and Finding Minutes for Everyone - The Downbeat - #816

Yesterday's big Jazz news was Brian T. Smith of The Salt Lake Tribune reporting that the Jazz were involved in trade talks to acquire Magic PF Ryan Anderson, before his eventual trade to New Orleans. The trade would have involved giving up Paul Millsap, which could be why the Jazz backed out of the deal:

To acquire Anderson, Utah likely would have been forced to give up power forward Paul Millsap. While the Jazz were interested in Anderson and considered making the deal, Utah ultimately backed off.

Anderson's an interesting choice for the Jazz. Last year was by far his best season, but he was only 23. Why was he so good? Because he was efficient offensively. He had a stellar 58.9 eFG%, completely on the basis of his 39.3% shooting percentage from 3 (where he took 60% of his shots) and 58% shooting percentage at the rim: 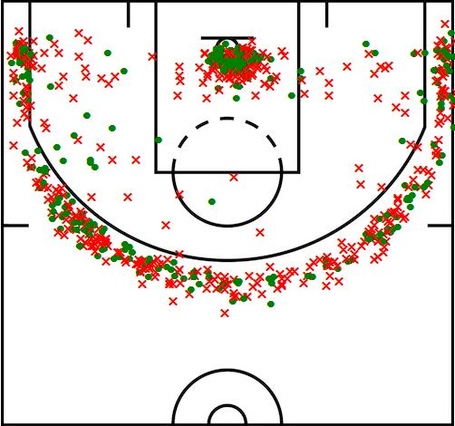 Anderson realized what made him a valuable player, and stuck nearly entirely to those shots: out of the 12.4 total shots he attempted per game, only 1.9 of those were non-threes or at-rim shots. It remains to be seen if he can keep his awesome efficiency in a role without Dwight Howard providing him the spacing necessary to shoot open threes.

Indeed, that's what makes him such an intriguing player for the Jazz to consider trading for: the Jazz offense, as we have discussed in length, is very traditionally not based around the kind of shots Anderson does well. Stan Van Gundy's offense, on the other hand, is very much based on the important principle of taking the most efficient shots possible. Perhaps the Jazz considered Al Jefferson as playing the role of Howard: sucking the defense in, allowing Jefferson to pass out to Anderson for open 3s.

This proposed move, along with the moves that the Jazz have made this offseason, may shed some light on a possible plan from KOC, et. al: utilize Big Al, the Conqueror, as the big man down low, and surround him with 3 point shot threats on the perimeter: Mo Williams, Randy Foye, Hayward/Williams, and Ryan Anderson.

It's actually not a bad plan: this style of offense is the primary way the Magic finished 4th in the league offensively in 2009-2010 when the Magic were at their peak. One initial objection I had when considering this plan was Big Al's passing ability, noted as marginal at best. However, interestingly, Jefferson's AST% has been higher than Howard's throughout his career, albeit by just a couple of percentage points.

There are two big problems, however:

So what are the Jazz to do with their current players? What system will they choose, and how much playing time will they get?

David Locke talked about this today in his blog post, and found the difficulty of finding minutes for the players who deserve them. I wrote about the difficulty of making the lineup minute numbers work out earlier as well. Basically, in our current configuration, there are players who are going to be disappointed with their role, especially in a contract year.

If basketball were like football, with stoppages for substitutions between every play, you could set up different lineups for every play, offensive and defensive:

But, fortunately for our entertainment, basketball is not like football. Every lineup has to run different kinds of plays, and has to play both offense and defense. And in that world, as Locke points out, the Jazz have some minute distribution problems. So... do you have a solution? Beyond pretend-trading someone on the team (too easy), how would you distribute the minutes on the floor?

DeMarre Carroll took his turn on the Jr. Jazz tour last week. The defining moment from a fan perspective was this picture, from DeMarre's Twitter feed, as he traveled the road between camps: 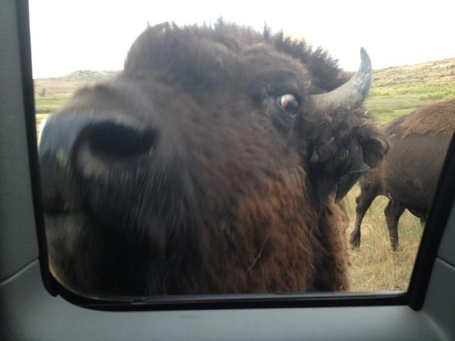 You may have noticed that we have quite a few good writers here in the Jazz community. Every time you come to SLC Dunk, or one of the other Jazz blogs, you find good-to-excellent writing on our collective passion, the Utah Jazz and NBA basketball.

But the truth is that the writers in the Jazz community are passionate about more than just basketball. That's why yesterday I created the familiarly-named SLCBunk.com: to give the Jazz writers you know and love an outlet for their writing in other fields.

This is now only day two for the site, and already we've been a surprising success. We've had 3 great articles posted in a variety of fields:

Importantly, we're getting these writers the exposure they deserve: in only the first 24 hours of the site, we've had 142 visits, with visitors spending over 5 minutes on the site on average. It's a good start, and the future looks excellent. We've got several awesome posts lined up to come, starting tomorrow.

So head on over and check the site out. If you're interested in sharing your non-Jazz works with the world, send me an email, and I'll create an author account for you. And readers, don't worry: we'll still be writing about the Jazz here, just as much as before. We love them. And we love you.