We here at SLC Dunk are going to D-Up on our team this month. Last month we dealt quite a bit with the NBA draft, free agency, trades, and three point shooting. This month we're going to get low, slap the floor, and play some defense. We're also going to be looking at the Utah Jazz from this defensive perspective.

I know I will, and so will the rest of the writers. Feel free to join in and talk d with us too!

There are three sections to this chart -

Furthermore there are regions to this chart, that divide the play types by high frequency (10 or more defensive possessions per game of this type), low frequency (less than 10), and "All other play types". All other plays are broken plays.Lastly, but most importantly, is the baseline frame of reference that is the "overall" values for each category. 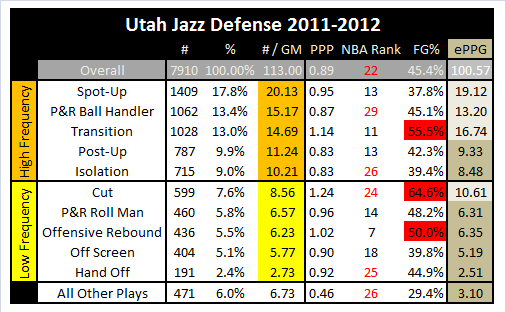 Waaaay more details on this and the other chart I have after the jump!

What does this tell us?

Well, the first thing we see is that the plays we have to defend against the most (orange) are Spot ups, Pick and Roll ball handlers, Transition plays, Post ups, and Isolations. Post ups and Isolations rely MOST upon the individual player defending them. And as such, rushing over to double creates a series of other necessary defensive adjustments if we don't want to give up an open shot. This cascade of movement is also necessary when it comes to dealing with a pick and roll ball handler. Either we have to shift over to stop penetration, which leaves guys open, or not shift over, and give the ball handler a great path to the basket.

I remember the Spurs series as a great example of how poorly we defended the pick and roll. Al Jefferson, primarily, was awful at this. I remember him running alongside (sometimes behind) Tony Parker with his arms up trying to escort the guard to the rim, but not actually play any defense, and not actually FOUL him either. So he didn't stop his man. He didn't help out his team mate. He didn't pick up the ball handler. And he also gave up a layup.

That's the "Big" man so many people who root or are paid to root for the Jazz constantly defend.

This is, after all, supposed to be about playing defense on the court though. So let's take another look at the chart.

The Jazz were, over all #22 in the league at defense, via the metric of points per possession. That's not good. And over our 70 games (66 regular season + 4 playoffs) we surrendered 100.57 estimated points per game. About 20 points alone came from Spot ups. The Jazz weren't BAD here. In fact, we were okay. The Jazz rank on Spot ups was #13th, and the other team only shot 37.8 fg% on them against us. I don't expect to improve on already being almost Top 10 at this. We only gave up 19.12 ePPG here, not 23 or 25 like other Jazz seasons.

The Jazz were also very good against transition. Yes, the top 2 things we gave points on were spot ups and transition, but it's not like we were BAD there. In transition we were #11th in opponents PPP, and for the most part, we were one of the better clubs against turning the ball over. I don't expect the Jazz fans could WISH for us to get better at these two things.

After all, the main problem on defense isn't spot ups, or transition, or isolations, or post ups . . . it's actually pick and roll defense. And this can ONLY improve by playing the right guys. If you have a guy who doesn't give two poops about playing defense, can't move, won't move, and won't take a foul he's the wrong fulcrum to base your entire defense around. I'm talking about Al Jefferson here. His pick and roll defense was bad it caused the rest of our defensive scheme to collapse and ALLOW our usually #13th best Spot up defense to look foolish as any member of Spurs bench guy shot and made threes against us.

Every other team watched the playoffs too - and they took notes. All of our division rivals will do the same thing and we'll have to contend with Russell Westbrook, James Harden, Ricky Rubio, Damian Lillard, and Andre Iguodala getting the green light to get a screen from whomever Big Al is defending.

The other main problem on defense was that the Jazz gave up 10.61 estimated points per game to the other team when they made cuts. This is the other main issue where you NEED to defend the rim with a mobile bigman. Big Al can't go out there and check face up guys, so we have to HIDE him close to the basket. He gets his share of blocks on his man (not weakside or help D blocks), but he's absolutely awful when he needs to quickly move on defense. Luke Ridnour got a game winner because Big Al wouldn't move. Guys cutting to the basket need to be picked up.

We didn't when Big Al was on the floor. And what happened?

We got burned here. We were #24th in the league, other teams shot 64.6 fg% off of cuts, and despite the other team only attempting cuts 8.56 times a game, they managed to score an estimated 10.61 times a game. It was, by far, our worst play to defend. 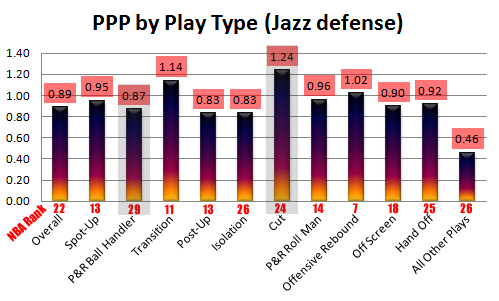 And like the Pick and Roll man defense, it relies upon the same defensive principle of picking up the guy going to the basket, and having guys work on defense as a team. And really, you need a mobile guy who is long enough to contest shots in both situations - while also being willing enough to move off his man.

Derrick Favors demonstrated this when he was the defensive fulcrum for our team (and worked well with Paul Millsap and Enes Kanter to cover their men, while they covered his). Our $15 million dollar man, on the other hand? Not so great.

And both of those plays exploited the same problem for us, in terms of personnel - a slow, immobile, unwilling help defender who is tasked with defending the rim. It's that easy. The numbers validate my 'hate'. And this isn't confirmation bias, I have access to the game film. Big Al was not a good defender. He was not a good defender on the plays our team was bad at. Other guys were better. He got the call, we gave up the points.

And while our offense was way better than our defense, we weren't a dynamic offense. We were boring, predictable, and easy to defend. And even the most dynamic offenses fail to win in the playoffs if they don't play defense. We need to put defenders on the floor.

And we are going to go over ALL aspects of defense here at SLC Dunk during Defense month. Keep in mind the two things we need to work on - pick and rolls, and against cutters.

The raw numbers may give you the impression that the Jazz were hurt on the offensive glass, the Jazz were #7th best in the league at taking care of this though. If the Jazz can cut down 1.5 estimated ppg on pick and rolls and cuts we win a lot more games.