Share All sharing options for: ESPN Insiders Chad Ford and John Hollinger bump Jazz up from 7th to 4th best in their NBA Future Power Rankings

You may not know, but ESPN Insiders Chad Ford and John Hollinger collaborate on their NBA Future Power Rankings index. These rankings are not based solely on a weeks' performance; but instead, focus on the players on contract, the management, their cap situation, market size, and draft picks and position. Based upon these metrics the Utah Jazz are #4 in the league; the only teams better are the two NBA Finalists (the Miami Heat and Oklahoma City Thunder), and the Los Angeles Lakers (who just added two HOFers to their roster, and one former All-Star in Steve Nash, Dwight Howard, and Antawn Jamison). These rankings get updated every year it seems. I could be wrong. The last time these rankings were updated the Jazz were #7, now we're #4. If you are an ESPN Insider you can check out the whole rankings here.

If you are not, well, here's a teaser image: 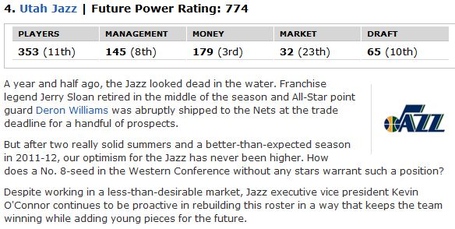 I did not include any of the analysis (there's a good 5 paragraph blurb that I did not include), but the Jazz score highly on the potential of our C4 (Derrick Favors, Gordon Hayward, Enes Kanter, and Alec Burks); our money situation (almost everyone off the books after this year); management stability (and addition of former Spurs employee Dennis Lindsey); and draft picks (we still are owed one "potential" lotto pick from the Golden State Warriors). The Jazz do not score highly in market size.

It's a very complimentary post that details some of the things we are doing right. And we ARE doing things right. It's nice to see ESPN recognize that. The NBA.com guys may not hype up our potential much, but we do have a bright future.