Last night I revealed the Utah Jazz rankings in the current "Future" dealy that ESPN's Chad Ford and John Hollinger work on. I noticed that they also included the archive for the previous rankings. There are 8 in total, and I was erroneous in thinking that they did one once a year. It only seemed like that because of the lockout. In fact there seems to be a schedule where they do one of these almost every 5 months (4.8 to be more precise, or between every 144 and 145 days), December, March, August.

After the jump I take a look at the 6 factors (Money, Market, Management, Players, Draft, and Overall), and the changes over the 8 time periods. There are some interesting things to be found! No. Really. Cool graphs and stuff. Okay, this is kind of a meta-nerdy post. But hey, I like it. 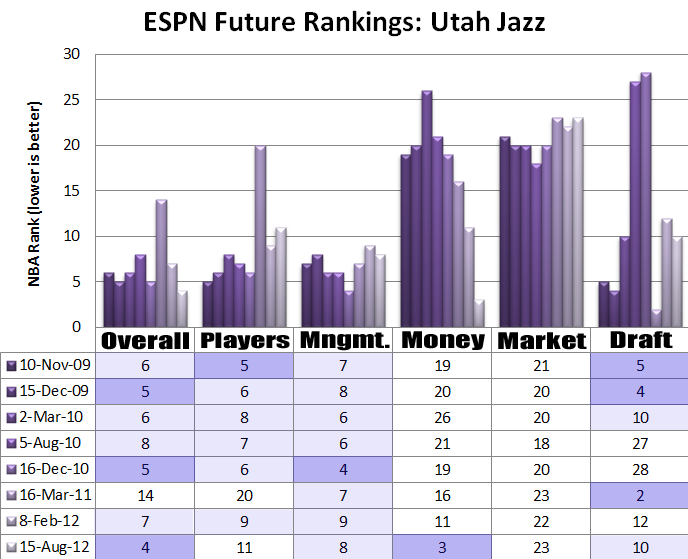 When you look at the 8 ranking sets there are a few things that we immediately see. The first is that, well, our market rank is not good. SLC isn't a big market, and unless some new industry pops up that makes it bigger, or there's a slew of snowboarding NBA players in the next few years, the market rankings are going to remain low. Free Agents don't want to come to Utah. The population is low. There aren't a lot of night clubs. The weather is cold in the winter. And so forth. These are not problems for me, in fact, they sound like the type of place I'd love to live in. I'm not an NBA player. Ford and Hollinger have both visited Utah a number of times, but from what they have seen, they deem to rank the Jazz low on this metric. The best they've ever ranked the Jazz was #18 out of 30, and most of the time the Jazz are 20 or worse.

The opposite thing that you may next see is that the Jazz management ranks have been consistently amazing - Top 10 each year. (It's the opposite because we're bottom 10 in Market) Even through the ups and down of the whole Deron Williams / Jerry Sloan sagas the team did not look bad to these ESPN guys. I think agents should take some heed about that, even if they aren't able to get their players in a lot of Kia commercials, or on ESPN sports center highlights in a Jazz uniform.

For the most part the Jazz have had an almost Top 10 roster during this stretch, and some good years and some lean years in terms of our draft future. There is a relationship here, though, the more consistently great we were the worse our draft stock got. And in our worst years roster wise we ended up getting the #2 draft future ranking. This last ranking set we got #11 and #10 - which is a great mix of potential, performance, and hope for the future.

The largest change is in money. The Jazz financial future is very flexible right now and a big change from all those years we were overpaying for Andrei Kirilenko, Carlos Boozer, Mehmet Okur, and Matt Harpring. I think the money issue made the biggest affect upon our spot overall. The Jazz are #4 over all, the best spot ever. (EVAR!)

Our future is bright, but looking at the trends we can expect our money situation to become less fluid and more solid as we sign our guys to long term deals. Our players ranking should keep going up in the next few years, while our Management and Market ratings stay the same. Hopefully our draft rating goes down too (meaning that we're a playoff team)

I think our team has a bright future. The numbers seem to agree with me. 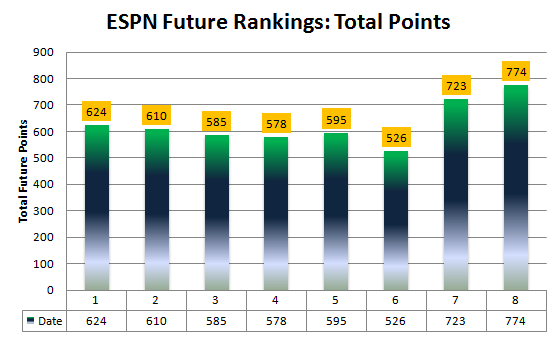