Russia's Andrei Kirilenko won the Olympic Bronze. His father in-law Andrey did it in 1980. Who did it better?

Share All sharing options for: Russia's Andrei Kirilenko won the Olympic Bronze. His father in-law Andrey did it in 1980. Who did it better?

A while back I looked deep into Olympic history and found out that Andrei Kirilenko's wife Masha's dad Andrey Lopatov played on the USSR team in the 1980 Olympics. We also found out that he had 26 points in the bronze medal game. Yikes. Well, Andrei brought home the second Bronze medal for the family, only 32 years later. Andrei didn't have a bad game either. So I guess we need to ask: Who did it better? 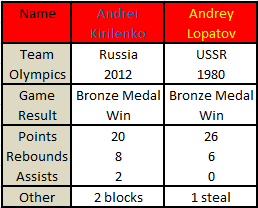 Andrei had a very solid game, nearly a 20-10 outing with 2 dimes and 2 blocks to boot. Andrey did not have the all-around game of his son-in-law, but he did score 26 points to secure a medal for the motherland, in a game played in Moscow. So, yeah. That must have been a pretty special moment.

It's even more special when you recognize that Andrei Kirilenko was the star of his team, and the guy they were going to RELY on to medal. Andrey Lopatov did not even play in all of the games for his country and was a bench guy.

I guess in that regard it's even MORE impressive that Lopatov scored 26 of his grant total of 59 points in a game, a single game, a medal game. (44% of his total points) Andrei dominated this tournament, doing everything from having 30+ point games to being a wizard on defense. Masha's dad was the 8th best guy on his Soviet squad. What's more impressive, a star playing like a star -- or a bench guy having the game of his career on the highest stage?

Additionally, this is not just a fluff piece where I get a chance to show off how great former Utah Jazz player Andrei Kirilenko is. You Minnesota Timberwolves fans better treat him with care, or else I will load up my dog sled and 'mush' my way to your frozen land to complain!