Jazz Fans and the Need for Constant Approval

Share All sharing options for: Jazz Fans and the Need for Constant Approval

I'm fascinated by the psychology of sports and sports fans, specifically. Why do we care? When you think about it, 10 men bouncing a ball and trying to shoot it into a basket, even in planned, organized fashion, is ridiculous. And the fact that we gather together in groups of thousands and thousands and get excited when a man (or woman) in an animal costume tells us to cheer, I mean, that's beyond ridiculous. But I love basketball. I love the Utah Jazz. It's ridiculous, but I wouldn't change a thing about my fandom. It's my favorite hobby. It's my favorite entertainment. My favorite reality television. And I love being part of a community that can discuss the team, break it down and most of all, hope for the ultimate joy one day. It's the hope for a championship that probably keeps me going, and watching, and writing.

But i don't want to talk anymore about the logic of fandom and why we root day after day. If you want to read more about that, you can read this blog post, by my good friend, theshums. Today, I'd like to talk about our general paranoia and need for acceptance as Jazz fans. And more importantly, why kicking it to the curb will help us all be better, more informed fans.

Not only are we concerned about 15 grown men on our Jazz team and how they play basketball, interact, or talk with the media, but as fans, we get way way too concerned with what other basketball fans think about us and our team. Why? That is the question I don't think there is a good answer to.

For instance, just look at slcdunk and the posts over the last few days. There are 5 or 6 mentions about how the NBA media and power rankers view the Jazz. We get so up in arms about what other people think about us. I get worked up. As Jazz fans we litter the twitter feed of a national writer who picked us to miss the playoffs this upcoming season, even if that national writer has been very complimentary of our team and our organization in the past. For some reason, we get upset when people write negatively about us. We get upset when they don't write about us at all.

Even Matt Harpring felt slighted by TNT for not scheduling the Jazz on any of their Thursday night games. Don't fall into that pattern. Here are some truths about the Utah Jazz:

1. The Jazz could finish 4th in the West this year or 10th and it would be equally surprising. The West is up for grabs this year. Lots of teams have a lot of variables that will determine their outcome.

2. What Marc Stein or David Aldridge or Zach Lowe, or basically anyone thinks or opines, or predicts about the Jazz, has little to absolutely no significance on the value of the Jazz organization or the team's actual strength. It's fun to see what people write or think about us and it's easy to get upset and defensive, but it does absolutely no good. Their opinion shouldn't be anything more than entertainment.

3. No national writer, that I can think of, watches as much Jazz basketball as we do. It's impossible. In any given week in a regular NBA season there are about 160 hours of NBA basketball to watch. Unless you have a favorite team or two or three, you aren't watching every game. There's not enough time. So even though a writer may have a better understanding than any of us, he or she, doesn't watch the Jazz as much as we do, probably.

4. Outside of Jazz fans, few people watch the Jazz for entertainment or feel good stories. The Jazz don't have a national pull or draw. They play a fairly boring style of basketball right now and their most exciting players don't get the most minutes. The Jazz play to win, not entertain. Even as an 8th seed last year, the average NBA fan, reporter, or blogger, cares very little for the Jazz.

5. Many national writers, and you know who they are, don't know that much about the NBA, let alone the Jazz and who's good and what not, etc, etc. Also, many national writers don't consider the Jazz one of their favorite teams. Some may even have biases or agendas against the team, for whatever reason. It's no different from your distaste for the Lakers, or the Thunder, or the Heat. It's just how the NBA works. Why would you care what any of those writers think of your team?

5. The Jazz are awesome. They are our favorite team, no matter what anyone else thinks about them. They are what their record says and one day they will hopefully hoist the championship trophy. And even if they do, there will still be writers who don't like them.

Now given all of these facts, why on earth would any of us have need to get worked up over what anyone thinks or says about the Jazz that don't have a direct connection to the team? Just to point out how silly many of these national power rankings and predictors are I would like to take a close look at Chad Ford and John Hollinger's future power rankings that Amar featured just yesterday.

I have seen a lot of positive reaction about this piece from Jazz fans and with good reason: it is super positive about the Jazz. Even if it isn't an accurate depiction of where the Jazz are as a franchise, it's awesome to many Jazz fans. What does it mean to be 4th in the future power rankings? Does it mean the Jazz are the 4th most likely team to win the title in the next 10 years? Fourth most likely to build a dynasty? Fourth best right now? All garbage.

Let's investigate exactly how the Jazz moved from 7th to 4th in the power rankings since February. Here is the ranking from yesterday: 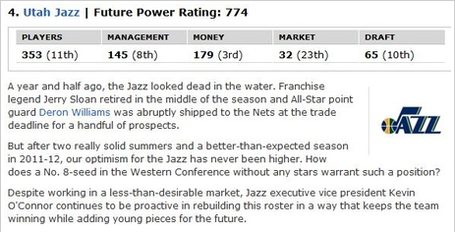 And here is the same power ranking, judged by the same criteria but back in February: 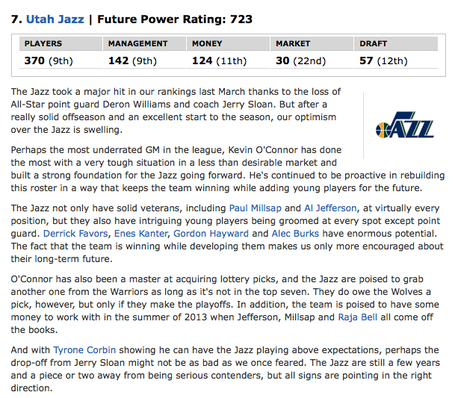 Since February the Jazz have traded Devin Harris for Marvin Williams, acquired Mo Williams and signed Randy Foye. And since February, the Jazz lost 17 total points in their player category. That's sort of funny, actually. But they did add 3 points in management, presumably for hiring Dennis Lindsey. They gained two points in the market department, for who knows why? Makes no sense. And the Jazz also gained 8 points in the draft and future picks category, even though since February, the Jazz have proven to be a playoff team, worsening their future pick, not to mention the fact that since February they essentially lost out on two first round picks of an incredibly deep 2012 draft. AND the Warriors have improved since last February, realistically worsening that pick. But somehow by having no first round picks last draft and getting worse future picks due to our and Golden State's improvement, the Jazz overall have a higher number in their draft category. I would love for someone to explain to me how that happened, other than this future power ranking is for fun and not taken very seriously at all. There's not much science or fact to it.

But the funniest thing to me is that the Jazz gained 55 points in the money category, which basically accounts for their entire movement from 7th to 4th. How did the Jazz make such an improvement since February? The Money category measures "the projected salary cap situation and the ability to exceed the salary cap and pay the luxury tax." I agree that the Jazz have a fantastic future salary cap situation with no long term contracts on the books, but since February the Jazz actually spent more money into the future by acquiring Marvin Williams who has an option for 2013-2014. That's not an improvement. On top of that, nothing has changed in the Jazz's ability or willingness to exceed the cap and pay the luxury tax. The Jazz weren't willing to pay the luxury tax back in February and they aren't willing now. Yet, for their unwillingness, Professors Ford and Hollinger awarded 55 magical points to Gryffindor. I mean the Jazz.

Just like any other power ranking or scientific formula that predicts performance and tries to ascribe "value" to a team, this power ranking is just entertaining opinion and arbitrary numbers. Sorry to say it.

The Jazz are as good as their record at the end of the year. They are as good as far as they get in the playoffs. But they are still #1 in our hearts. And it doesn't matter what anyone else thinks about them. So don't even bother with the writers who don't think the Jazz are the greatest. They're just mostly, entertainers, who know as much about the future of the NBA as anyone, which is not much.