Do you remember when the Utah Jazz participated in the Orlando Summer Pro League, way back last month? Yeah, it happened before we finalized our team and it only lasted 5 games. And we did not really set that smaller summer league on fire. Even our best player, Alec Burks who was named to the All Orlando Summer league team, only averaged 17.2 ppg, and shot 14.3 3pt%. There were some good things we saw in Orlando, and some things that were not so great. In my opinion the brightest star from our team that went to Orlando wasn't a former lottery pick (sorry Alec and Enes Kanter). And it wasn't our high scoring rookie Kevin Murphy either. It was Jeremy Evans who rushed back from his wedding to join the team to play in their final 3 games. And, honestly, he pretty much changed my entire opinion of what kind of player we have on our hands with him.

Anyway, to go deeper into what happened in summer league click on below...

The roster was a mix and match lineup of young guys under contract, guys not under contract but NBA caliber range, and fringe NBA guys. I went over the roster in more detail back here . . .. but I'll give a quick review. The team featured Alec Burks, Kevin Murphy, DeMarre Carroll, Enes Kanter, and Jeremy Evans. That that, well, the picking became quite slim. Former NBA guys Blake Ahearn, Kyle Weaver, Cedric Simmons and Stephen Graham made our team. Ahearn played PG for the Jazz last season and he's an NBA-DL guy. Great shooter, unfortunately he's 4 inches too short to have been able to get by with just shooting. Kyle Weaver is super versatile, a former 2nd round NBA pick, who last played in the NBA for the Jazz. He can play PG, SG, and SF. Cedric Simmons was a #15 pick in the draft by the New Orleans Hornets, and i three years in the league played 75 games and played for four different teams. Stephen Graham is the twin brother of Joey Graham, and a defense first dude.

After this group we have the fringe guys. This was a mix of rookies and veterans from other leagues. Michael Stockton was the guy we all rooted for, John Stockton's son. He competed in a crowded backcourt with unspectacular Mike Green, and Deron Washington, who had crazy hair, made hard fouls, sank buzzer beaters, and had the nichnames of "crash" and "smash" given to him by the NBA TV crew. (Or Crunch? I don't remember, it was a long time ago). Filling out the team was Paul and Elijah Millsap's eldest brother, John Millsap; Justin Knox, Tony Gaffney (played for our DL team), Henry Sims, and Salah Mejri.

Going into this show I expected a few things from our team. 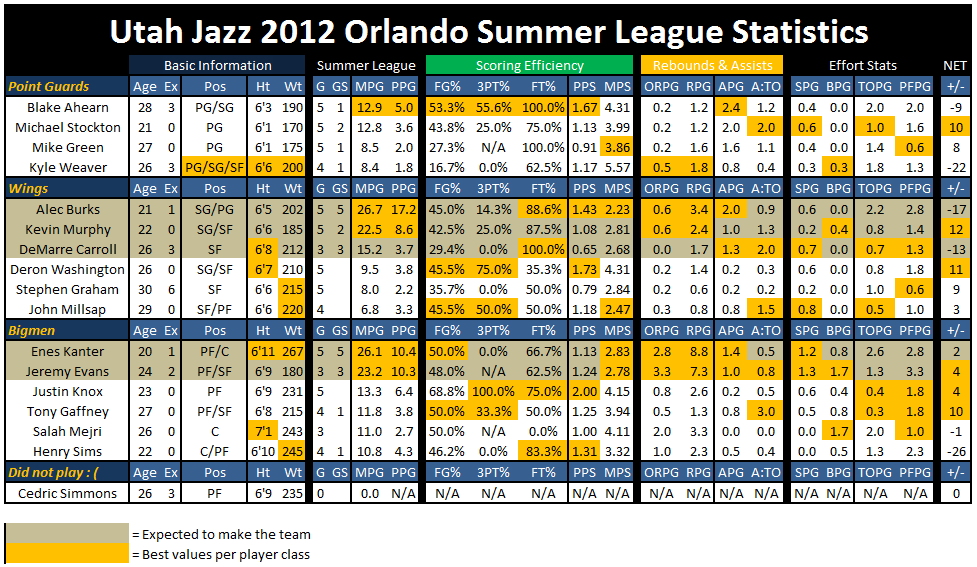 This is divided by player class (PGs, Wings, and Bigmen). The most apparent thing is that Cedric Simmons didn't even play in a game for us. The other thing to note is that Evans wasn't even on the original roster, so it's really swell that he ended up showing up to Orlando and playing for us.

What the Numbers say:

This is just a quick break down of things, there are LONGER, more class specific break downs to come soon.

Overall there were some surprises. Burks was good but not great. Kanter was raw, but we knew that. Evans played his butt off. Murphy isn't perfect, and we don't know who he is right now. Stockton plays the game right, and there's no space for him. Washington, Knox, and Mejri all did things right, but are far from NBA players right now.

In the next post we focus in on the important players here, and speculate about if they are going to camp or not. (Yes, this will involve a game by game breakdown . . . I guess. More work for Amar . . . )