NBA General Managers do not follow the rules of Math and Science 1: Algebra

Share All sharing options for: NBA General Managers do not follow the rules of Math and Science 1: Algebra

According to the 17 seconds of research I did, the name Algebra derives from the Arabic for the "reunion of broken parts". In a way trying to understand NBA General Managers and some of the silly trades they made is truly an exercise in specifically this type of reunion. I can't stress enough at how there appears to be a series of inequalities when it comes to trades. Essentially, one of the parties is getting the better side of the deal. And well, the other side just got screwed. In algebra everything can be figured out though, be it through finding equivalences or understanding the basic relationships that these values seem to have.

We're going to look at two trades made by the Utah Jazz, both of them involving popular former starting shooting guard Theodore "Blue" Edwards. We're looking at his trade away from the team on June 24th, 1992; and his trade back to the team on February 3rd, 1995. And gosh darn it, we're going to use math here to see if there is any internal consistency in the heart and minds of NBA General Managers!

(Seriously, everyone stand back -- I'm going to do some math here)

We know who Blue Edwards is. He's a sometimes starter who can do a few cool things on the court. He and Jay Humphries (a good PG, but not a great one) were twice traded for each other. To make the trades work there were other pieces involved in the equation. If you let every part of the trade be represented by a value (a, b, c, d, e, f . . . or x, y, z, etc) anyone can solve this. It's pretty simple. And well, it's so simple that it makes me upset.

We have two trades, essentially each trade is its' own equation. What we're going to do is isolate for Blue Edwards on both sides, simplify, and then solve for the best player remaining.

It's nerdy. It's the off-season. And it gives me a small sliver of Jazz news to write about as I continue to research our team and the trades we make. 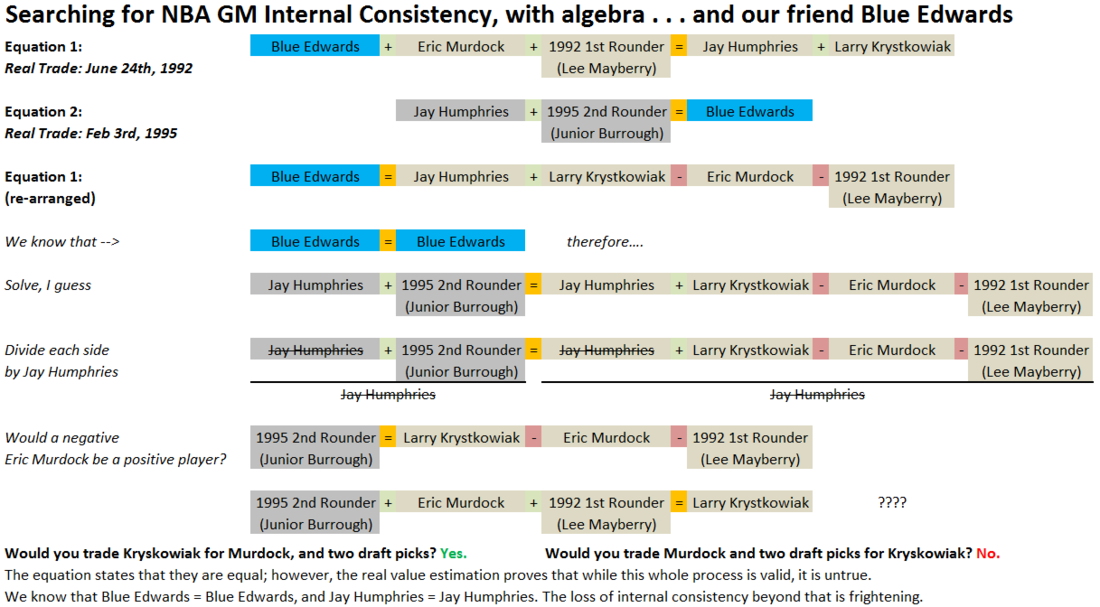 Too small? Full size can be found here.

NBA GMs don't follow the rules of math and science. Or, perhaps, the inherent nature of NBA trades are to be unfair in some way? Let's ask the Lakers . . .