Jazz 2011-12 Positional Review: Centers A and B, and how we can now go big and should

Share All sharing options for: Jazz 2011-12 Positional Review: Centers A and B, and how we can now go big and should

Last season the Utah Jazz played all 66 regular season and 4 playoff games without a 7' footer on the team. Perhaps having a 7'er on the team and winning are completely unrelated. However, most of our past defensive schemes seemed to have been anchored around a really *really* big guy in the middle. Truck Robinson wasn't big, but he played big (really, he averaged 15.7 rpg in a Jazz uniform once). Mark Eaton was surely big. Greg Ostertag too. Even little used Kyrylo Fesenko was big enough to play 'traditional Jazz defense', which meant contesting all layups, fouling hard, and changing shots. I guess we need to move beyond that - but it's hard to argue with the results of a big defense center.

Last season we did not have one. But we did have a few really talented guys try their hand at it. Two in particular really stood out to me: Player A, and Player B. I honestly think that all of our Bigs on the roster -- Al Jefferson, Enes Kanter, Paul Millsap, and Derrick Favors -- could benefit greatly playing alongside a true, 7' plus defensive throwback. But it's unlikely to happen (unless Salah Mejri starts dating Tyrone Corbin or something). That said, we may not need t anchor ourselves to that type of center. We have two very interesting players on the roster already. One is better on offense, the other better on defense. It's one thing to compare them against each other -- but let's try to also move beyond that at see what they do individually. And know this: they may be even better on the court together this season. 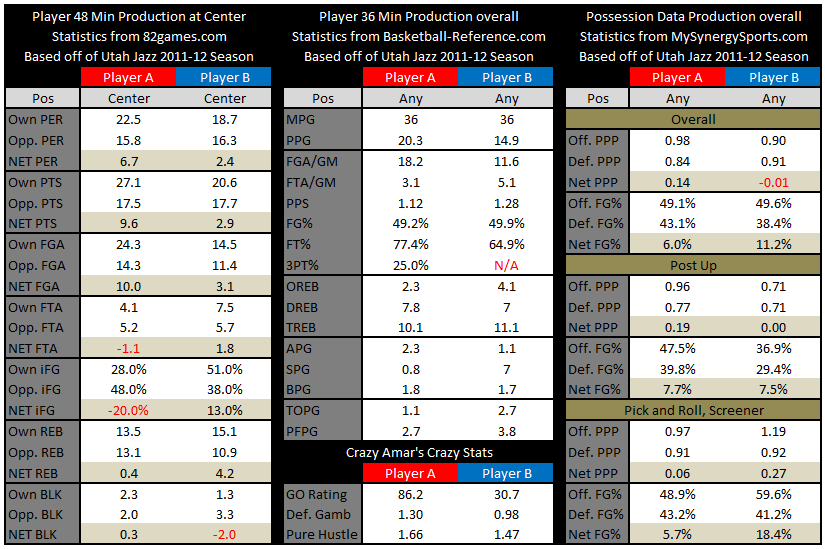 Click on this to open to a new window, use it to switch back and forth w/ the "analysis"

This flatly shows both guys, and what they did at the 5 spot. Player A had an All-Star like PER. Player B was a little off of that, but still significantly above average. Both were better than their opponents in PER. They both were also better than their opponents in almost all the categories (as seen as a positive value in the "net" row). The only times when this was not the case was:

If you wanted to compare and contrast the two Jazz players you could make the generalization that Player A was a way better offensive player, even though he didn't go to the line more than his opponent, or was a killer near the rim. Player B was more consistent across the board; however, he did not really dominate in any area (save for around the rim). If you wanted to high light the differences, Player A took 10 more shots during 48 mins than BOTH Player B and Player A's opponent. He shot a lot and scored a whopping 27.1 points per 48, which is also 10 points better than his opponent. This is a lot of points. The actual difference between the two players when it comes to taking shots and scoring, though, is that Player A takes +9.8 more shots a game, at the return of scoring only +6.5 more points.Still, 27.1 points is 27.1 points. Player A is better offensively. Player B takes the wind out of the sails of his opponent.

This set of values is more familiar looking, and incorporates both players at the PF and C spots. It also evens out their minutes, so it attempts to take the minutes factor out of the equation. Right off the bat it continues to become clear that Player A is the superior offensive player. He scores 20.2 points per 36, while player B only manages 14.9 points. He also shoots +6.6 more times per 36 minutes, to score +5.4 more points. I guess Player A is a better offensive player -- but also just shoots way more? Player B gets to the line +2.0 times per 36 minutes, despite taking 6.6 less shots a game. Wow. So in a way they compliment one another (glass half full), one takes shots only when they can score or get fouled, while the other one is the more overt offensive force. They both shoot okay from the field, but both need to work on their free throw shooting.

Player B is the better rebounder, Player A is the better passer. Despite the obvious error, they are about equals when it comes to steals and blocks (Player B's SPG should read 0.7, not 7). The only other major difference besides overt offensive role would be turn overs and blocks. Player B fouls more and turns the ball over more.

Player A and Player B:

You can't go wrong, really, with either of them. Player A is very proficient on offense. Player B is an all-around talent, who is defensive focused right now. Both can play PF or C, and if you have a smart coach, you find a way to make it work. Clearly Player A is Al Jefferson, and Player B is Derrick Favors. Al kills it on post ups, he has all the moves, and is a billion year vet compared to the under-used / under-experienced Favors. Favors makes mistakes, but he has all the potential in the world and is only going to get better as he gets more seasoned.

Big Al can't defend, or play in the pick and roll. Those two things are pretty much D-Fav's calling cards right now. Favors can't score at an elite level, well, Big Al isn't Mr. Automatic inside, but he still does enough on offense to make the other team take notice.

The disparity in offensive and defensive abilities between the two aren't as great as it used to be in the Karl Malone / Mark Eaton days. And unlike the Carlos Boozer / Mehmet Okur days, people still know what defense is. Big Al isn't a perfect player, or arguably a complete player. But next to Favors he is good enough to a) offensive take the heat off of the young man, and b) defer the major defensive anchor position to someone who actually knows what he's doing.

At the end of the day you have to play the guys who best help your team win. In a traditional sense where you're going up against legit size - then you figure Big Al and Favors are those guys on the inside. (Even though my heart bleeds Millsap - I think it's fair to say this is the inside tandem we need to see increasingly more of as the season progresses)