Share All sharing options for: Thunder Forward Kevin Durant's movie "Thunderstruck" coming out soon. Instead, let's check out the acting credits for the '92 Dream Team Members

Unless you're blocked by the NBA's official twitter feed you probably have heard by now that Oklahoma City Thunder forward Kevin Durant's movie is about to release "in theaters." In a long tradition of hyping up the high scoring forward for the Western Conference NBA Finals losing team, who also happens to plays in a small market, it's pretty much par for the course that we're getting bombarded with news about this movie. Durant plays Kevin Durant in this movie. I know. Not all NBA All-NBA guys need to play defense. And not all NBA players in movies need to actually play a character. The actual movie, from what I can tell from the trailer, is highly derivative and unoriginal. (Didn't they just mash up two preexisting Michael Jordan vehicles for this?)


Durant is a star in today's NBA. But let's look at the actual ACTING credits for some of the stars of my era of the NBA - the 1992 Dream Team. We've seen these guys in countless movies and TV shows as themselves, either playing basketball against animated monsters, being in TV ads for chocolate bars, or even on dancing with the stars. We've also seen them playing a role that was actually "not themselves, in a movie about basketball, where you play yourself, playing basketball."

Who actually "Performed" on the Dream Team: 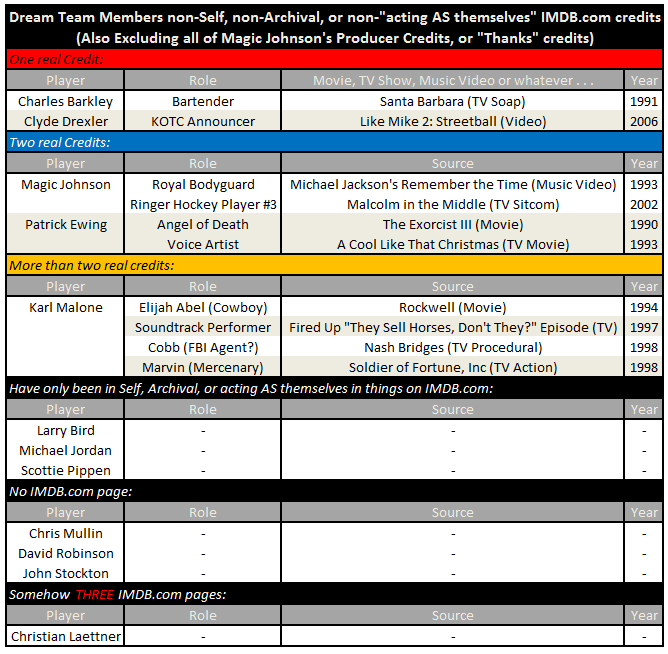 The dude who dominates this list may not be a surprise for Jazz fans, and smart NBA fans. He dominates MOST All-Time lists for BBALL players. It will be a surprise to dumb NBA fans though. But that's okay. They get surprised by a lot of things. And I'm not joking about the Laettner thing. He has three IMDB profiles, and he's the same guy. The first one is clearly him. The second one was the producer on a Duke NCAA BBALL video. And the third one played himself in the recent Dream Team documentary. Someone should clean this up. But like Kevin Durant, he's never played an acting role in a movie or TV show before. He's only been himself. So in a way, Kevin Durant and Christian Laettner are the same guy, or in the eyes of the IMDB.com editors, Laettner is three guys who are just like Kevin Durant when it comes to 'acting'. (Flopping, that's a different metric on the other hand . . . )