Share All sharing options for: Jazz Defensive Review - Blocking Shots and how to get more effective at it

The Utah Jazz block a lot of shots. This, in itself, should not be news. In 2011-12 the Jazz blocked the #4 most shots in the league. In 2010-11 the Jazz were #3. The Jazz do not have one overt monster anymore, there is no Mark Eaton, Greg Ostertag, or even Andrei Kirilenko on this team. There is, however, a legion of sub-seven footers who do block a number of shots. Individually you don't think Al Jefferson, Paul Millsap, Enes Kanter, or Jeremy Evans are defensive stalwarts. Teamed up with Derrick Favors, though, brings this collection on 'non-overt bigs' into a gestalt shot blocking unit, one where the sum is indeed greater than the individual parts.

But let's also not forget that blocking a shot is a component of defense, but not a substitution of it entirely. After all, if you block the shot you do not guarantee getting the ball back. Sometimes you block the shot, and it sails defiantly out of bounds. It looks good, and the crowd says "oooh", but you don't help you team as much as you would have if your team recovered the ball. Even if you don't block the shot out of bounds you may not block it towards your team mate. Not everyone is smart enough to do that, or alternately, not everyone is lucky enough to have the ball bounce near your guys.

Last season the Jazz blocked 412 shots in 70 games (66+4). That's 5.9 a game. Approximately how many of them were recovered by the Jazz, and how many did not change possession of the ball? Well, I put about 10% of all the blocks in a table and figured it out myself. (Is this sample representative of the Jazz as a whole? I don't know. We'll have to do more research with a larger sample size later...) 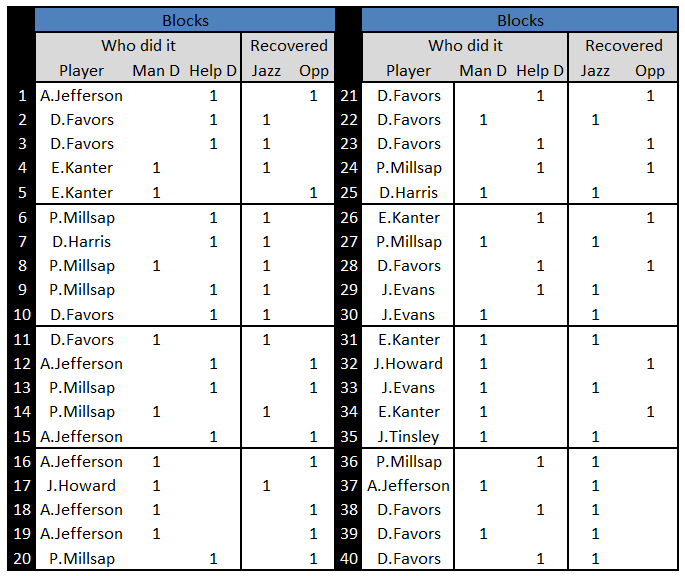 Over all, though, the Jazz (from this sample)

I think the Jazz amazing shot blocking would be EVEN MORE EFFECTIVE if we recovered the ball back more. Is 60% higher or lower than other teams? This is probably the first question to answer. But in my mind, I do see the Jazz blocking the shot out of bounds only once in the sample of 40 blocks. In that regard, the ball is still in play, and fair game. It ends up being an issue of floor spacing and hustle that prevents us from getting the ball more. (Our wings have to stay out near the 3 pt line, instead of bunching up in the paint on defense)

If the Jazz were able to somehow get up to 65%, without needing to block more shots per game, then the Jazz would be able to get more chances to score. Right? And it's not even about scoring, blocking the shot and letting the other team get the ball back, and then have a chance to hurt us on a broken play is not good defense.

Shutting the other team down with a one and done, and then having to face us in transition the other way IS winning defense. I know we can do it. We have the shot blockers. Now we need the wings and guards to gobble up the ball AFTER it is blocked.

I believe in this team. I believe in team work. We were great a blocking shots over the last two seasons. And we know we got a lot better at rebounding over this last season as well. Our defense is building up slowly, from the rim outwards. The next step now is for our non-bigs to hustle more. (I honestly don't see our P&R defense getting better this season, calling it right now. It will get better the NEXT year for sure though -- but we just saw how Favors helps in the P&R -- maybe just having him on the floor more anyway will help in this regard?)

Hit us up in the comments section guys, I'm here to research and write about what YOU want to read.