In order to better formulate a PLAN (because apparently no one has made a plan that satisfies certain members of the Utah Jazz community) I've decided to do a lot of HOMEWORK while making my minutes plan. And you know what else? I'm actually going to be SHOWING my work too. You get transparency here at SLC Dunk. It hurts some peoples' feelings though, but hey, reality isn't an Ivory Tower. The first part of the plan is to look at our players on the roster, and try to figure out where they are coming from. What really determines the type of role a player is willing to expect and accept really SHOULD be where their career is going. Part of that is where they've come from. Another part of that is in what period of their career they are in right now.

Younger guys may feel it necessary to shut their mouths in order to pay their dues. Older guys may similarly be happy to contribute when called upon. People in contract years want the time on the floor to get their next contract. And players in their peak (not too old, but with god experience) really want to maximize where they are right now. All in all, juggling minutes is never easy. But when have I ever taken the easy route in term of internet sports pissing contests?

Last season there was a team that, on paper, had four legit PGs - and in order to get everyone playing time two of them played way more SG than they probably would have wanted to play coming into the league. This team made the playoffs last season. That team was the Los Angeles Clippers. We picked up two of those players this off-season and now we have four legit PGs on paper. We have the same problem they had. So what do you think our solution to this problem is going to be?

One more interesting fact about our PGs . . . they are ALL in contract seasons. So, yay, fun! 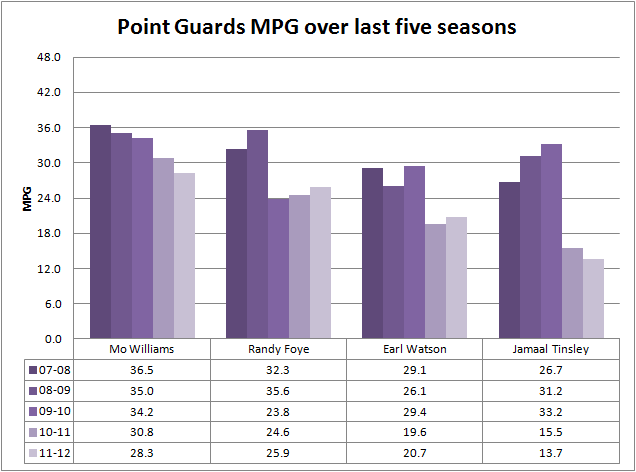 Mo has gone down every year, but now back in the starters spot I kinda think he wants to play at least 30 mpg again. Randy has been up and down, but no matter what team he was on (this same is for MIN, WAS, and LAC), or which spot (PG or SG) he always played at least half the game. He'd love to see that pretty much continue as well. Earl went from being a starter to a bench leader. He did not play over 30 mpg ever, but by the same token, did not really dip below 20. Even last season with all the ups and downs he still played 20.7 mpg. Jamaal has already accepted his fate. Wonder if Earl will pick up the hint this year?