Well, we have a number of players on the team right now that probably would Loo-ooove to get playing time in the NBA. It's not as bad as the point guard problems for two big reasons. The first is that there are twice as many possible minutes to be distributed. And the second is that 100% of the wings aren't in contract years (which is the case for the point guards). Still, it's not going to be easy to figure this out. There are three guys who could start, and two spots. Furthermore, there a guy from the PG camp who will need to get some playing time here as well. And so far we haven't even talked about giving Kevin Murphy minutes . . . sheesh

And lets not forget that Randy Foye factors into all of this too. 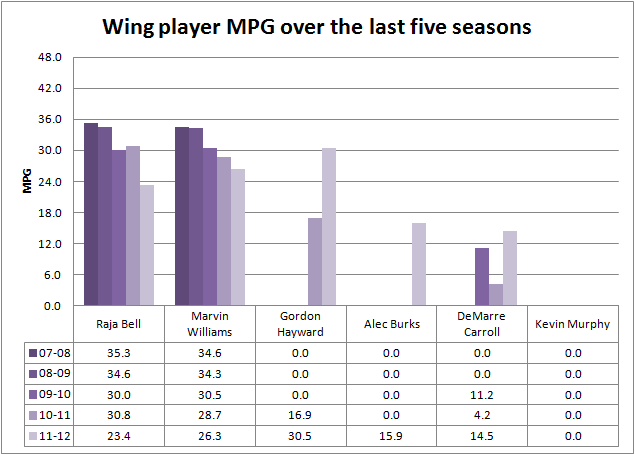 Raja Bell needs to take a long trip to the injury reserve. His MPG has gone down every year, but in his mind he probably thinks he can give a team 30 mpg. Well, technically he can. Sadly, that team is Beşiktaş. Marvin has taken a smaller and smaller role each season as well. If he could be happy with playing less than 30 mpg that would be amazing -- that said, in my mind at least -- he's still a guy who can be useful for 30 mpg or more if need be. Gordon played over 30 mpg last season, and he only will require more and more. Alec played very little, but he needs to play half the game this year at the very least. (Which is kinda how much PT Randy Foye wants as well.) DeMarre is an energy guy but he needs to be on the court for sure. Kevin . . . man . . . I don't even know if the Jazz have a Developmental League team anymore. I feel sorry for you man.