Part 1 (The player zones of age vs mpg)

Unlike the problem with point guards, or wings, there are no Raja Bells or Jamaal Tinsleys in this group. Every single dude here needs minutes. And well, there are only 96 minutes in a given game. Provided going to overtime wasn't on purpose last season, the problem will persist this season as well. 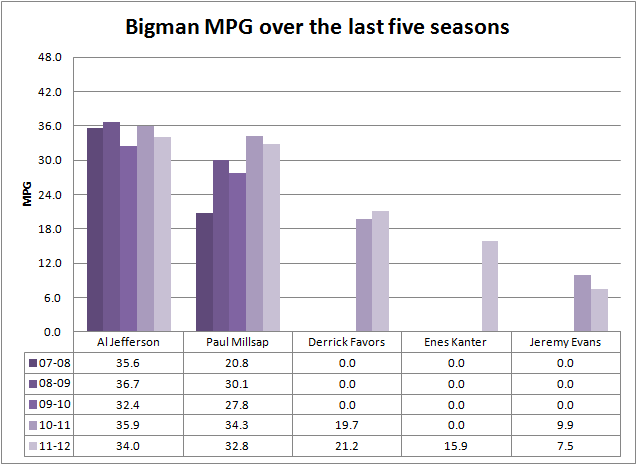 There is really no movement with Big Al. He always plays. He doesn't play crazy minutes (36+ mpg), but he's always above 32 though. Paul is a self made man, and finally got a chance to play -- and was a near All-Star last season. Derrick is on the slow growth plan right now, but he needs to be getting over 30 this next season. Enes needs minutes too, but it's going to be hard for the Jazz to nut-up and make a decision on Big Al or Paul. Jeremy Evans is a nice player when he gets into the game. The Jazz are not trying at all to get him into the game though. He played less MPG in his 2nd season, and he also played in less games.