Here we go and look at the difference between the 15 players in terms of their average MPG over the last 5 seasons against last season. We look at the difference, factor in what player zone they are in (Peak, Green, Grey, Yellow, or Red -- from Part 1); and factor against their career trends and baseline MPG (Part 2, 3, and 4).

Data in colorful cart form . . . because my readers are worth the effort

Here we have the 15 players first divided by position class: Point guards, Wings, and Big Men. Second we have their MPG average for the last five seasons and their MPG for last season. Then, obviously, the numerical difference in MPG averages. Followed closely are the player zones and baseline MPGs values. All this info was broken down into more detail in the previous four parts of this series.

So yeah. This *ish be cumulative!

Lastly we look at the justification for that baseline MPG value, and if that is even possible. 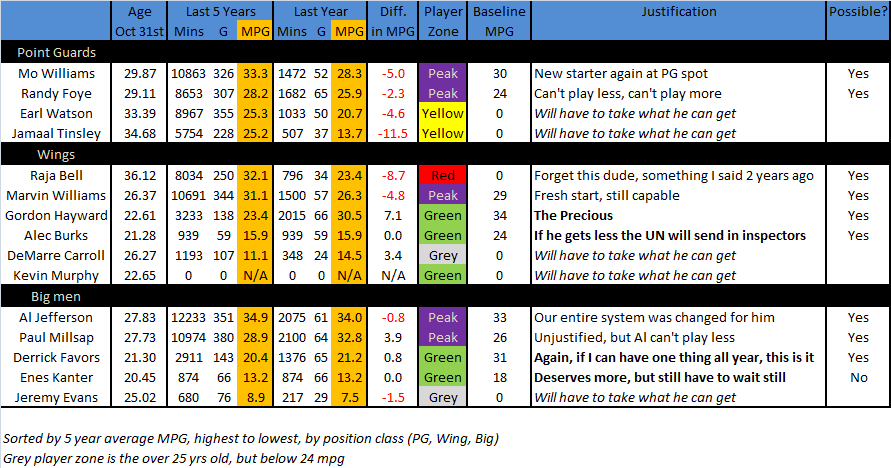 What does this mean?

The first thing you see is that I don't have a baseline value for a couple of players: Earl Watson, Jamaal Tinsley, Raja Bell, DeMarre Carroll, Kevin Murphy, and Jeremy Evans. Okay, maybe that's not just a few, that's 6 players -- about 1/3rd of the entire team. If you were going to figure out playing time for our team you're not going to start with something like "Earl needs to play 20 mpg, let's start here and work outwards." No, Earl is an after thought when it comes to minutes this season. I hope he recognizes and accepts that point.

The second thing is that for the most part guys in their "Peak" don't get messed around with. Randy lost 1.9 mpg from last season, but Marvin got +2.7 mpg. Mo got +1.7 mpg. Big Al lost 1.0 mpg, and Paul Millsap stands to lose 6.8 mpg -- but hey, Favors has to play. Over all, outside of Millsap, everyone else pretty much are playing around where they should be according to the reflection of their 5 year MPG trends vs. their playing time in 2011-12.

Lastly, let's remember that these are the baseline values for STARTING to make a MPG / playing time chart. Depending on the situation (injuries, and DNP-CDs) things are going to be different in real life. What we're doing here is making an estimation . . . more into Part 6 . . .