Really, the silver lining in the whole "worry" about minutes is that, well, not everyone plays in every game. Well, everyone not named Enes Kanter, at least. Over the last five seasons only four players have played in 90% of the available regular season games. A number of other guys were in the high 80% range though. But if you actually look at how many games were played, and see how many games were missed -- you may come away with the sense of relief, thinks will kind of sort themselves out. Seven out of our 15 players miss at least 10 games a season, over the last 5 seasons. Another 4 missed five games a season. That means only 4 players are really good to go every game. 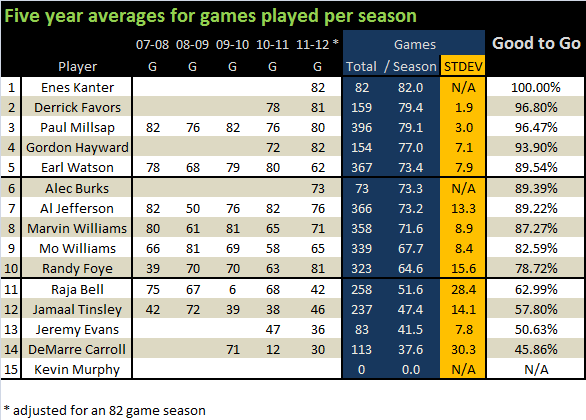 N.B. This has nothing to do with DNP-CDs. This is just how likely a player is to actually get in the game.