Share All sharing options for: The 5 Biggest Storylines of the Upcoming Utah Jazz Season - The Downbeat - #825

How good will the Golden State Warriors be?

It was fun and then really depressing to keep tabs on the Warriors last year to see how good or bad they would be. Of course the Warriors will owe the Jazz their 2013 first round pick as long as it isn't top 6, so many Jazz fans will keep one eye on the standings and the Warriors progress. I suspect the Warriors will be pretty good and challenge for a playoff spot as long as Stephen Curry and Andrew Bogut are healthy. And with teams like Charlotte, Orlando, Sacramento, Toronto, and Cleveland in the mix, it's really hard to see the Warriors being a bottom 6 team record wise. I would put good money on the Jazz claiming the Warriors pick next summer. Golden State can't afford to shut down another season to keep their pick. The question is: how good will the pick be?

Why Tyrone Corbin and Al Jefferson? This will be a big season for the both of them, because it will mark the first season where both of them will be out of excuses. For Coach Corbin it will be his first season with a defined offseason, summer leagues, a full training camp, and an 82 game schedule. It will be nice to see some improvements in his gameplanning and substitutions as well as some natural growth from such a young coach. But no one will be able to use the fact that Corbin wasn't under ideal situations of a team in crisis or a lockout shortened season next summer to explain his shortcomings.

For Jefferson, he's finally surrounded by a talented team. He'll be paired with a great defensive presence in Derrick Favors for much of the season and surrounded by players who can make open perimeter shots. The excuses that are used to cover Jefferson's passing abilities and defensive shortcomings won't fly after this season. Jefferson has shown that he can play in the Jazz system and has shown improvements in his ability to find open teammates, but will he be able to show that he can be the main piece on an average or better than average offensive and defensive team moving forward? 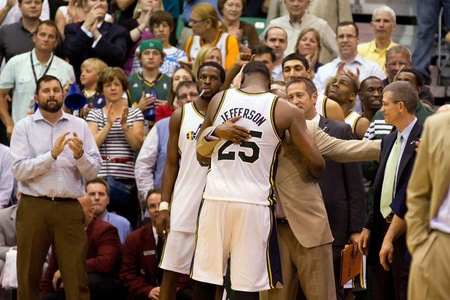 It'll be a big year for these two guys. (Tyrone Corbin is the guy being hugged by Jefferson. Mandatory Credit: Russ Isabella-US PRESSWIRE

Will Gordon Hayward and Derrick Favors make "the jump" this year?

If you look closely at the stats of Kevin Durant, Lebron James, Russell Westbrook, Andrew Bynum, or Amare Stoudemire, to name a few, you will see a big jump in statistical production, and more importantly in their positive affect on their respective teams, during their third seasons. For whatever reason, most stars in the league took a big leap forward in their game after the second year. Can Derrick Favors and Gordon Hayward make a similar jump and move from blossoming talents to stars in the NBA? Much of the future of the franchise rests on that question. No pressure Gordon and Derrick. This video isn't the jumps I am talking about by the way.

But I wouldn't be surprised to see both Hayward and Favors play 30-35 minutes a night and for Hayward to score 17 or 18 points a game and Favors to put up numbers around 16 and 12 a night.

Will Derrick Favors get more minutes and what will that mean for Paul Millsap's minutes?

We all know this story and have thought about it and wondered what will happen to Paul Millsap. Will Favors push Millsap out of the starting power forward spot? Will Favors replace Millsap or end up playing alongside him? I find this to be the most interesting story for the Jazz the next 8 months or so even if it is the 2nd most important storyline this season. We know how Derrick Favors and Paul Millsap feel about the situation.

"I want to be a starter and show this team and the fans what I can do. This organization and fanbase have shown me a lot and I want to repay them. And the best way I can do that is by being on the floor and winning basketball games."

-A fake quote Clark made up to attribute to Paul Millsap even though it sounds exactly like something Paul Millsap would say.

Will the Jazz make the playoffs this year?

Common sense would suggest that the Jazz are a shoo-in to make the playoffs. Afterall, they were the 8th seed last year and they have only improved this offseason. But getting better on paper and in real life are two very different scenarios, and the other issue is that almost every other team around the Jazz improved as well, and maybe even more than Utah did. Last year's push to the playoffs was super exciting and we should expect a similar close call when the playoffs come around. It's going to be an exciting season. Can we start it yet?

What are the biggest storylines to you this year? Is there another one that is a top 5 story to you? Sound off in the comments.