Share All sharing options for: NBA and Utah Jazz Infographics - The Downbeat - #826

It's August. Training camps are quite a bit away. Indeed, there are still

until training camp. Things are such that Kevin O'Connor even admitted that he took a vacation. Our players are getting married and going on honeymoons.

But we here at SLCDunk are taking Gordon Hayward's approach:

Thought about not going to my 2nd workout bc it's Friday, but then I thought one of u guys is getting better so I had to go #improveeveryday

I know, you'd rather not see the #improveeveryday hashtag from us. But that's exactly what we're doing: we're spending our offseason getting better at writing and expanding our knowledge of the game of basketball. Personally, I've spent hours watching Hayward's defense on the Synergy scouting tool for an upcoming post, started a new blog for our Jazz writing community to develop their writing talents (SLCBunk.com), and even expanded my game to the radio. As a group, we're working late at night to plan for the season ahead, bringing you new features and content to become one of the foremost NBA websites on the entire Internet.

We're also discovering some pretty cool things about NBA basketball, and I wanted to show some of the coolest ways to share those discoveries: infographics. This Downbeat is dedicated to showing off basketball data in cool ways.

Amar shared this with me: a visual representation of each team's schedule difficulty through the season. Here's Utah's: 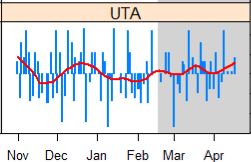 The main take-away here is that Utah's schedule is pretty balanced. Dig deeper, and you can start to see mini-trends. The season starts with a difficult stretch, before bottoming out with a pretty easy schedule at the end of November. December is somewhat difficult, but January and February are relatively easy , leading to a ramp-up of better opponents at the end of the season.

Our easy January may turn out to be critical. In each of the last 12 years, if the Jazz's record was over .500, they made the playoffs. If it wasn't, they didn't.

Who gets the Sixth Man Award?

A great source of NBA infographics is the company "VisualLoop". It appears they just make infographics for a living, which is pretty neat. Luckily for us, they have made a number of informative infographics, about the NBA, which largely can be found here.

The most interesting one to me was this graphic detailing the history of the NBA's Sixth Man Award and its winners. In particular, here are the Sixth Man Award winners with the highest, lowest, as well as the average stats for the 5 major statistical catgeories: 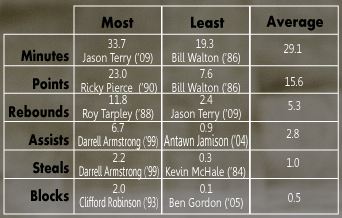 Should Derrick Favors come off the bench for the majority of next season, I don't think it would be outrageously unlikely for him to approach or surpass those average totals. Burks may also have potential as a big scorer, though he is probably likely to be bested in that arena by the likes of James Harden.

Success of Every Shot Last Season By Location

Kirk Goldsberry is a geographer, by schooling anyway. He received a PhD in Geography from the University of California, Santa Barbara in 2007. We'll let him explain:

My research focuses on the visual dimensions of scientific communication. I’m particularly interested in the links between visual form, graphic design, and spatial reasoning. This avenue of research is significantly influenced by the principles of cartography, visualization, cognitive psychology, vision science, spatial analysis, and human computer interaction.

We're also lucky that he's a basketball fan. He's published this article on shooting percentages in the NBA last season, including this particularly helpful infographic: 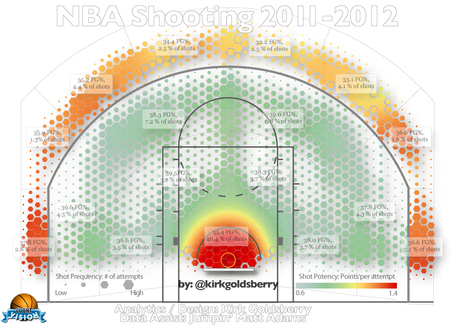 The most striking thing to me is how the shooting percentage in every single zone, other than the one in the immediate vicinity of the basket, is in between 32.2% and 39.6%. Other than layups, the NBA shot less than 40% on every single type of shot! This graph also really effectively shows the benefits of shot selection entirely built on layups and 3 point shots.

Indeed, Kirk's website also has a really interesting post on the mid-range game: including two Jazz post players; one who was best in the league in his zone, and one who was worst. Can you guess who, and where?

Here are the answers. Are they what you expected?

Synergy's normal platform, which allows users to scout video of players and teams running and defending certain plays, has become relatively well known since its introduction to NBA fans two years ago. But their scouting report platform is less well know, but has a much better graphical representation of data. During the Spurs playoff series, I wrote an article looking at how their regular season offense completely obliterated our regular season defensive weaknesses: 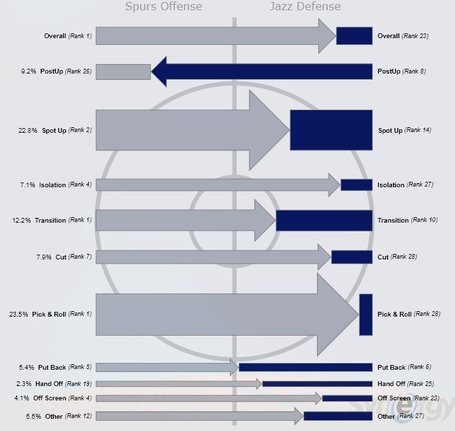 In case you have somehow blocked this from your memory, these arrows were prophetic: we lost that series quite badly. But the tool is useful to get an idea of how the Jazz play, even without comparing them to one of the best teams in the league. Click here to see the Jazz's success in the regular season and playoffs in Synergy's unique data display.

The Best Players in Jazz History

Chris Kirkham is a man who is good at many things. One of those things, importantly to this post, is making infographics. Another of those things is Flash. The final ingredient: a passion for the Jazz and a working knowledge of Basketball Reference. As a result, we get this: a quick look at the highest ranked Jazz players in the major statistical categories: 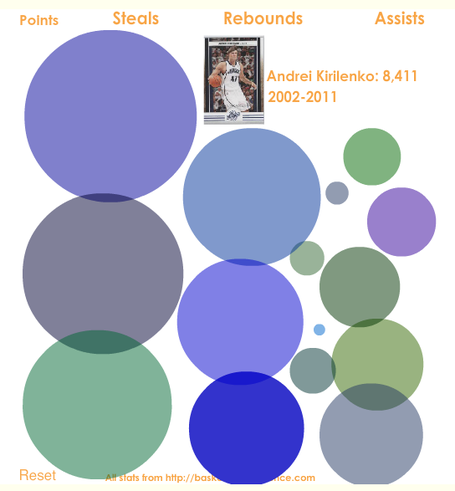 Click here to visit Chris' site, to try out the full applet and see some of his design sketches. Cool, right?

Have you seen any other really cool NBA or Jazz related infographics? Has anything in this post informed or surprised you? Let us know in the comments.