The Olympics are to blame for Superteams - The Downbeat - #809

Share All sharing options for: The Olympics are to blame for Superteams - The Downbeat - #809

Diana wrote about Derrick Favors possibly working out with Karl Malone this summer in yesterday's Downbeat and also asked what we'd like Favors to learn from Karl if this blessed event were to occur. 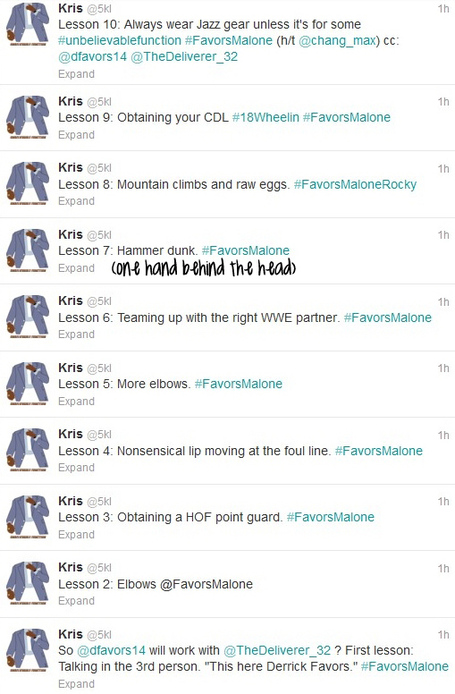 I think I'd die (happy) if I ever heard Favors say, "This here Derrick Favors." Also, it should be pointed out that Favors already has a split eyebrow going for him.

If I were to ask you what your number one Jazz worry/concern is going forward, what would your answer be?

Mine would be Jazz personnel's ability to develop players (obviously the players have to do their part too, but player development is definitely a collaborative effort). Second would be Tyrone Corbin's ability to adapt, willingness to make changes when occasion calls for it, and ability to recognize these occasions.

Kevin O'Connor was asked this question a few days ago and his reply was, "Probably injuries. You know, everyone worries that, you know, as far as that goes. And you know, still, a legitimate, a legitimate shot blocker." He then went on to say that of all the things he's learned about Corbin over the past year, it was Corbin's ability to adapt and have his team respond when the team was hampered by injuries to Raja Bell, CJ Miles, and Josh Howard down the stretch.

I still think (my opinion) that those injuries forced Ty into playing the "big" lineup (rather than it being some adjustment on his part to improve team performance; again, my opinion), and this was the main reason we made the Playoffs.

Here is your president and chief operating officer, Randy Rigby, on why the Olympics are a bad idea:

One of the concerns I have had is our athletes being around each other together and enjoying this idea [of playing together], and by them being around each other, some of our superstars, them talking and just saying, "Well, maybe we oughta stay together and formulate our own little squads in Miami or in New York" or wherever it might be. I think there's been a little bit of that atmosphere going on, and I don't like that competitive nature. I like the idea of players wanting to say, "No, I want to compete with each other and I want to compete and beat you." You know? Deron Williams wants to compete against Dwight Howard instead of teaming up together after we've already gotten all of our money first, and then now let's make it easier for us to win. I like something about people just saying, "No, we're going to follow the rules that's out there, and I don't get to choose and pick. Whoever gets picked to be on my team though, we're going to compete together and go out there and win." And so, one thing I think the Olympics has done a little bit is maybe invite that atmosphere of those guys coming together and wanting to do that. So that's one negative to what the Olympics does.

Translation, courtesy of Clark: "There is a reason we can't be title contenders but it's not our fault."

In next week's interview, Rigby will outline his plan for eradicating AAU ball to pre-emptively prevent the idea of playing together in the future from formulating in the heads of superstars before they become superstars.

Seven of the 15 players on our roster are on expiring contracts. KOC says that the possible effects of this are "overblown." Seeing as how teams pay for offense...