Here on the Dunk we've been particularly interested in our "kids" and their potential. The C4 is comprised completely of lottery picks who all have ceilings that we, quite frankly, aren't sure where they extend. Will the C4 explode or fizzle out? Who knows?

Info on what I predict with them and their potential reaching capability after the jump. 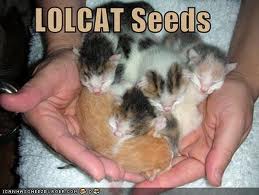 Since we're talking about our "kids," I figured this was an appropriate lolcat

I started off doing a little research on draft position and the amount of improvement that each pick made over the years and noticed that my research was absolutely going to flop because there were so many busts that actually got worse over the years. The one trend I did notice was that those players that made a significant leap in their first or second year continued to improve and made a drastic overall improvement. So, here is a summary of the improvement of these players over 5 years that made a large PER improvement in their first or 2nd year (large =1.5 or greater)( this is a whole bunch of #3, #9, and a few #12 picks).

From the data we can see huge strides in the first 3 years. After that, there isn't much improvement. I used this data to make predictions for our C4 based off of their first year PER and assuming they fit the description of "a player that made a significant leap in their first or second year."

Those ceiling numbers aren't the ones that I would like to be the absolute ceiling (and truth be told, if I took the absolute highest PER of all these players instead of the 5-year high, this number would be bigger), but it does represent a conservative estimate of what these players can get to. Also, it only takes one of them making a bigger leap (in the realm of 9-12 like Melo or Nowitzki did) to get us the 1 superstar we need. Now let's look at what the real data is.

Wow! G-Time made a huge leap. He really started to figure out his game and all indications say he can make a similar leap in the next 2 years. This would put his ceiling PER at just over 20 instead of the 17.41 above. Also, PER doesn't measure defense well, which we know G-Time has awesome defense. Favors is also slightly ahead of the curve and looks to make a slightly bigger leap in the next two years, especially if he learns how to play offense. That would put his ceiling in the 22 range with, once again, PER not measuring defense very well.

With all of this said, I think the biggest indicator of potential for our other 2 members of the C4 is what happens next year. If they make a leap of 1.5 PER or greater, look for them to be staring at a PER in the 20's in 5 years. If they don't make that leap, all is not lost so long as they do the next year. If they don't make that leap in year 2 or 3, they are destined to stay at the level they are or get worse.

Here's to having 4 guys with All-Star level stats in another 4 years!

Do you think Burks and Kanter will improve like G-Time and Favors have (i.e. believe that they have all-star potential)?