Paul Millsap Turned Down a Maximum Contract - The Downbeat - #810

Share All sharing options for: Paul Millsap Turned Down a Maximum Contract - The Downbeat - #810

As you may have heard by now, the Jazz have reportedly offered Paul Millsap a maximum extension and he has in turn refused the offer and will most likely become an unrestricted free agent next summer.

Of course, there is more to the story than that. From SLTrib's Brian T. Smith:

So in truth, the Jazz offered Millsap the most money they could in a non-rookie contract extension. From Larry Coon's NBA CBA FAQ:

"The salary in the first year of a veteran extension may be any amount up to 107.5% of the player's previous salary"

I had made the mistake of thinking that Paul Millsap's salary is about $8.7 million meaning his maximum extension could start around $9.4 million and average about $10 million a year over 3 years, but if you subtract his signing bonus that was averaged and added to every year's salary, Millsap's base salary is actually about $7.2 million. So 107.5% of $7.2 is a starting salary of $7.7. When you add maximum contract increases, you learn that the most money the Jazz could offer Millsap in a 3 year extension is indeed $25 million, as Brian Smith reported.

As you may realize, it isn't really in Millsap's best interest to accept that extension if he believes, and probably righfully so, that he can make more than an average of $8.3 million on a free agent contract next summer. Also, significantly, the Jazz have reportedly offered Millsap the most money they could right now to stay with the team. That means something.

(Continued) My initial reaction was that this twist in the Utah Jazz story would ultimately lead to Millsap's trade at some point this season. But after further reflection, I think this could be good news for the Jazz. It does certainly complicate things. If the Jazz decide to keep Millsap the entire season, Millsap could possibly be offered a large contract the Jazz don't want to compete with and he could be gone with nothing in return. Or the Jazz might also be able to work out a longer term contract at a higher number than $8.3 million. If the Jazz are willing to pay Millsap 3 years, $25 million, what would their ceiling be for a free agent contract offer? Four years, $32 million? $40 million?

The other thing that could happen, is that Millsap could find the free agency market drier than he imagined and be forced to take a smaller contract to return to the Jazz, much like Ersan Ilyasova did, when he returned to the Bucks at 5 years and only $36 million guaranteed.

The likelihood of that can probably be determined by the teams that will have cap space and a need for Millsap next summer. I compiled this list:

Obviously we know that at least two of those teams really like Millsap and would probably pay him a nice contract to start for them, but will it be more than the Jazz want to pay Millsap to stay? Would Millsap prefer a starting position with another team over the uncertainty of starting for the Jazz? The Jazz obviously want him to be around the next 3 years, but do the Jazz trade Millsap, knowing that they could lose him for nothing or just a sign and trade at the end of the year? This will be a big story line to follow this season and into the next.

Two nights ago, we conducted the first, of hopefully many, SLCDunk writers get together in Salt Lake City over some Mexican Cuisine. Proof: 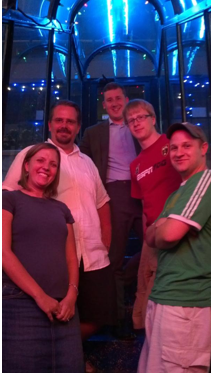 I won't identify anyone, because I haven't asked their permission, but we had a fun dinner and great conversation about the Jazz. We talked about our loyal blog readers, about the direction of the team, about the young guys and the old guys. There wasn't anything monumental about the evening, but I did just want to put a plug in for my fellow slcdunk writers, whom I hadn't met face to face until Saturday evening. We all love the Utah Jazz more than is probably healthy. We all are passionate and well informed fans, even if our opinions may differ. And we all appreciate the readers of this blog and what you all bring to the conversations, debates and fanbase. It's the best fanbase in the world. Thanks for the part you all play.

If the Jazz do trade Millsap this year, they will officially no longer have any Jazz players from the team that made the Western Conference Finals in 2006-07. I can't imagine that crazy of turnover in any business or many NBA teams. I wondered aloud last night: "has any conference finals team from 2006, had close to that amount of turnover?" Then I decided to research that year's conference finalists and which players were still on the team. Here's what I found:

That's a ton of turnover for each of those teams. Making the conference finals in 2007 seems to be a bit of a curse. The thing about the Jazz is that they have approximately 27 expiring contracts on the current roster and I would imagine that the Jazz will have at least 4 or 5 new players on next year's team. My question to you: what sort of affect does all of this turnover have on a business like an NBA team or on this team in particular? Discuss.

Raise your hand if you have bemoaned the fact that the Jazz drafted Enes Kanter. Now raise your hand if you are/were positive that Jonas Valanciunas was the obvious better choice over Kanter. I'm not saying you were or are wrong about either fact, but I find it interesting that I have heard Valanciunas' name thrown around by many Jazz fans as the more obvious NBA player over Kanter and Jonas is currently averaging something like 4 points and 4 rebounds in his 5 games and has looked really overmatched at most times.

I'm not saying that Kanter was or wasn't the right pick for the Jazz. I'm not saying that Jonas V, will or won't be a good or great NBA player. But how do you think Raptors fans are feeling while watching Jonas play in the olympics? They probably feel a lot like Jazz fans felt when Kanter looked really average during Summer League. All fans go through it and it's just one more reason why you should never judge a player's career after one season. Only after two seasons. Kidding. Sort of.