A transcript of DL's first two conversations at his new job

Share All sharing options for: A transcript of DL's first two conversations at his new job

How these were recorded and transcribed is a complete mystery. Attempts to verify the complete accuracy have thus far been futile (we just get "No Comment"). So, for now, perhaps we should consider it apocryphal rather than canon.

But it is put up here anyway, to show how awesome this Dennis Lindsey is and how he's trying to mesh himself into "The Jazz Way" already, first day on the job.

DL: So, I'm thinking we ought to plan ahead as if Derrick Favors is a starter.

DL: Well, his per-36 minute stats are 15 points and 11 rebounds, plus a steal and almost two blocks.

KOC: WTF is a Per-36 minute stats? Do you use a calculator to figure that, because I'm not sure I trust calculators.

DL: It's just an algebraic ratio. Really simple to calculate, but you don't even need to. It's already figured on websites like basketball-reference.

KOC: Algebraic ratio? You have to use calculus for this stat?

DL: Not calculus. Algebra. You take it in 7th grade.

KOC: Algebra. Calculus. Trigonometrus. Coitus. You're talking astrology. Real math is when you add and the answer's 10. When you count on your fingers, and you use all of them.

Conversation #2 after the jump

DL: So in San Antonio, a reason we were so successful is that Buford and Popovich were always on the same page. Personnel moves matched his ideas and game plan, and his game plan matched the personnel moves.

DL: So, tell me about your game plan. That will help me match guys that will fit to what you're trying to do.

Ty: Al posts up on the left block, we throw it to him, and everyone stands around and watches him shoot.

Ty: What do you mean? That's the game plan.

DL: Usually game plans have kind of an overriding philosophy and then several sets and plays. 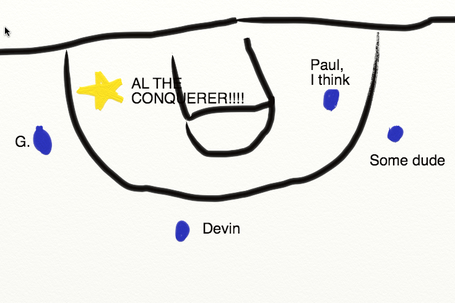 DL: ... so many thoughts in my brain right now ... First of all, did you know that Devin's not on the team anymore? Mo's probably going to be the PG.

Ty: No problem, man. See, my offense has been designed to turn every guy on the court into a 100% replaceable part ... except AL THE CONQUERER!!!! So just but this Mo character in for Devin. Hell, put anyone into that PG spot, and it's the same. Except that Borks kid. No way I'm going to try him out at PG. That's getting silly.

Ty: If we have the ball at that time, anyway.