Jazz 3 on 3 Team - Who gets to represent: the youth or the veterans?

Share All sharing options for: Jazz 3 on 3 Team - Who gets to represent: the youth or the veterans?

We're running things a little late (sadly, my real job hates me) but we're quickly trying to get all of this done. I think we need to decide which three on three team gets to represent the Utah Jazz. The community had their say and voted for Derrick Favors, Gordon Hayward, and Alec Burks. I like this team. They'd be a fun team to watch. But in predictable Jazz management matters, I don't think they'd let our pups play even in a hypothetical tournament without having to PROVE themselves against our vets. (Practice? We talking 'bout practice?) So . . . In my mind at least they'd have to beat Big Al Jefferson, Paul Millsap, and Mo Williams first. 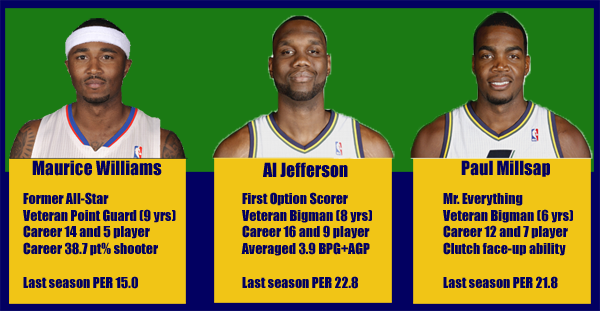 These players are solid. They all have a lot of experience and are capable scorers. Playing in a 3 on 3 tournament makes it a half court affair, and limits transition buckets. This totally favors Jefferson who can't move. If you can space the floor around him you can't double him. The offense is not going to be very dynamic, but it will be predictable. Mo sets up Big Al, he does his thing, and maybe Paul cuts or gets the offensive rebound. The key player on offense isn't going to be Jefferson though. Mo is not a risk to drive the ball, but you need to keep a man 'home' on him. The eventual double on Jefferson will come from Millsap's man. So it will be up to Millsap to get to the open spot on the floor and make the shot (when the ball rotates (hopefully) to him). Offensively this team has a lot of balance, and as dominating a non-All-Star there is at the one thing he does well.

Defensively this team is going to have problems. Most other teams are going with two guards and a big, and that means Paul is going to be at a disadvantage. Furthermore, Big Al is great at blocking the shot of his man, but not so hot rotating, checking other guys' men, or playing in the pick and roll on defense. This veteran team may be good enough to hurt the youth team on offense, but I don't think our vets have what it takes to play defense -- while I'd give our youth a shot to do just that. 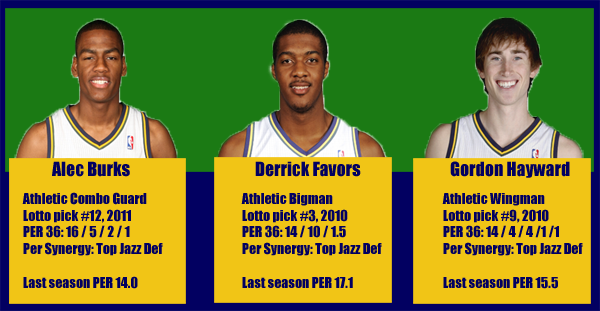 Instead of experience you get youth here. In stead of on court production you get potential. This group is made up of three of our best defenders according to the scouting numbers. (Where as the other one is three of our best offensive players). Burks, believe it or not, is amazing on defense.He was #108 out of the 500 or so players in the league, as a rookie. While he was not great defending guys in isolation, he was #40 vs. pick and roll ball handlers, and #8 vs. guys coming off of screens. What do you think he's going to see in a 3 on 3 tournament? Yeah, those two things. He was also #103 vs. guys spotting up. Burks is great on defense. So is Derrick Favors. Favors was #47 vs. Post ups, and #63 vs. pick and rolls. Again, what is he going to see as the defensive anchor of a 3 on 3 team? Those two things. He's long, athletic, and mobile. Three things Big Al is not. Hayward? He can guard everything, quick guys who drive, spot up guys, and even some post up guys. He's long and deceptively athletic. And these three guys can, in short stints, switch on almost every play. That's something the "veteran / Scoring team" can't say.

The main problem for this team, though, is going to come on offense. Favors isn't a go-to guy, while Jefferson clearly is. This team will have the added benefit of playing with the Jazz' best pick and roll scorer in Favors though. And this team has two ball handlers, to the Vet's only Mo Williams. Burks gets to the line like crazy and is quite good spotting up (5.5 FTA / 36 mins, 50.0 3pt% off of spot ups). Hayward can set his guys up all day as a point forward (go watch some Butler Bulldog's games). They can take turns. All three of these guys kill it cutting to the basket.

Right now the vets win in a head to head game, but only because there is a disparity in Big Al's scoring over what the younger guys can do -- but -- I contest that the youth would have a better chance WINNING games vs. other teams because of their floor balance, athleticism, and their defensive abilities. The younger guys are younger, faster, and dominate (vs. the other guys on the team) in defending the types of plays they'll face in a 3 on 3 tournament. I think by sharing the ball, and mainly, having two guards (and not two bigs) will help them match up way better with the rest of the league.

I think the vets win a head to head game, but have little chance of making it to the Sweet 16 or whatever, in this tournament. (Seriously, we'll be facing off against Kevin Durant, James Harden, and Russell Westbrook -- who is Big Al going to defend there?)