A few days ago we looked at Morris Almond, and while he wasn't a Utah Jazz lottery pick -- I felt like he should have worked out better. But that's, like, just my opinion though. Man. (Warning! Bad words and tight purple pants a'hoy!) David Locke offered up his opinions on a few guys I think are worthy of their own posts as well: Chris Morris (who I briefly mentioned - and to be fair, Teenaged me thought he was going to be a 20 ppg here), and Raul Lopez. I think the Raul Lopez situation is very valid. I remember reading, years ago, about Bill Simmons' hypothetical ideas of what Len Bias would have meant to the aging Boston Celtics. He would have played with an aging Larry Bird and crew - and sustained their run and future legacy. Raul Lopez wasn't supposed to be as good as Len was supposed to be; but one could argue for some parallels between the two situations. Lopez was supposed to be that full throttle guy to come off the bench, be a raw younger player, make mistakes, but make up for it with effort. Instead we got a broken down player (two acute injuries are just bad luck) that we had to pay for via buyout - who was never capable of being the guy we drafted. Would he have extended our run at the top? Maybe . . . maybe not. He would have been a good guy to have 'active' around an end of the line John Stockton though.

Maybe - time permitting - I can go into more details on that. Lopez was a dude I did have high hopes for. But, right now we're going to look back at Morris Almond. Locke's videos are great. His Tip off on the 6th goes over this, and other, topics. If you fast forward to the 4:30 spot you can get his take. To paraphrase he suggest that:

"Morris Almond is the prototype of what the league IS in that regard; that's who doesn't make the league, and that's not surprising in any way . . . it's not a disappointment . . . at all."

I think there's a lot of truth to that statement. As a result, I wanted to dig in a little deeper for myself. The results are . . . in a word . . . mixed.

What Kind of player doesn't make the league:

There are so many players who aspire to be NBA players. College kids. Highschool kids (in a previous era). International guys. Guys in lower domestic leagues. Lots of people want to make it TO the NBA. Some do make it to the league, but don't really make it IN the league. Morris Almond was one of those dudes. Why didn't he make it? That's the harder question for an Jazz outsider / fan to answer. And hey, I like being a fan. I like being a non-insider. While I don't get all the straight dope, I think being an insider would ruin my fan experience. There are some things I would just rather NOT know about my team. If you catch my drift.

As I'm not an insider - and not privy to any 'straight dope' - I can only speculate on Almond's inability to make it. I think the common narrative is that he did not have the right mindset to make it on the Jazz. Maybe he was entitled? Or perhaps he did not want to start off from zero, and work his way up? Or that he just didn't have as compatible a game as he would have needed to get on the floor? Again, I don't know.

As a result, we need to look at what I do know. Players do not make the league for a variety of reasons. The biggest is that their PLAY on the court prevents them from staying in the league. Another is that their play IN PRACTICE precludes them from staying in the league. Still, another aspect could be their off-court hobbies. In the last post we went over his NBA minutes; his D-League performance (which required a legit look at the NBA level); and his performance the one time he got to play with guys better than him. That may not have been convincing enough in any one direction though.

In that post we also looked at his physical abilities, and compared them to other Jazz players. Almond looked the part of an NBA player - when he played with Deron Williams, and when compared to his peers. There were just too many peers though. One reader proposed the idea that Almond couldn't get playing time because there wasn't any to be had.

That's the simplest idea. It really is. And it makes the most sense. Maybe Almond didn't do anything to earn more minutes; but also did not do anything to have minutes taken away from him?

So why even bother looking into this?

I feel obligated to look into this because I'm curious as to what types of players make it and which do not. And according to the data -- if anything -- the draft picks in the late 20's usually don't make it . . . EXCEPT for #25th picks. A team isn't likely to get a star at #25, but he's more likely than NOT to get a bench player who sticks in the league. 82games.com has done research on this, and for the 20 year time period of 1989-2008 here's the breakdown from pick #20 till pick #35. Morris Almond was pick #25, remember. 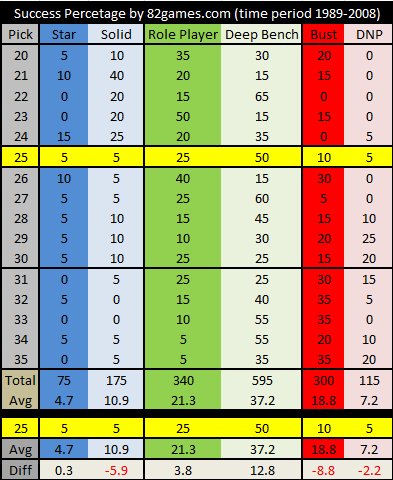 The #25th pick is less likely to get you a starter (-5.6% less for Star and Solid); but also less likely to get you a bust or worse (-10.9% less for a Bust or DNP). The remaining +16.6% is boosted up for a role player or deep bench guy. Compared to the average data for the 20 years in this sample, the #25th DOES kind of make it. They are the near prototypical late 1st round draft pick that sticks with the NBA. In a way, their 75% chance of being a role player or deep bench player very so DOES make it a surprise that Almond didn't stick. 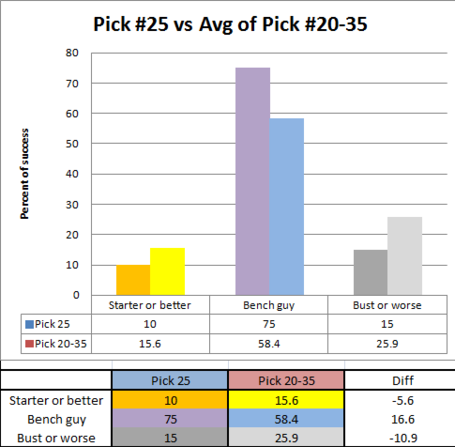 By draft stock Almond not making it as a bench guy (again, 75% chance) is surprising. And personally, it is also disappointing to me.

Maybe the Jazz drafted a guy at #25 who wasn't good? I think that could be a likely theory. From #21-35 here were the draftees in Mobe's draft:

You can always play "shoulda / woulda / coulda" with NBA drafts. Maybe the Jazz just drafted poorly here because there were other good dudes to be had? Or maybe it didn't matter. If the Jazz drafted a wing he still would have been behind Ronnie Brewer, Andrei Kirilenko, Kyle Korver, Matt Harpring, and C.J. Miles on the depth chart. If they drafted a big dude he would have been behind Mehmet Okur, Carlos Boozer, Paul Millsap, and honestly, Jarron Collins. The Jazz had Deron Williams at PG, and were good. (Though, they used a 1st rounder on Eric Maynor a few years later)

One could suggest that the Jazz picked the wrong guy in this late draft group. One could also suggest, and be almost 100% as valid in suggesting, that it didn't matter who the Jazz picked as there was no playing time to be had. It should also be pointed out that in lots of pre-draft mock drafts -- if the Jazz weren't picking Almond they were said to be picking Derrick Byars -- who was picked #42, and he only played in 2 games in his NBA career. Whatever the reason, these two guys who were supposed to be NBA players did not make it.

David Locke, a Jazz insider, absolutely feels like there is no surprise Almond didn't make it. The draft position data suggest that a guy in his draft spot had a 75% chance to make it in the NBA. The peer data from his 2007 NBA Draft seems to suggest that other guys picked late in that same draft DID make it. The Utah Jazz roster information suggests that there were not many minutes to be had, regardless. And if you looked at the physical, college, and NBA DL info -- one could presume that he should have at least been given a shot.

But he's a guy who only played in 34 games for the Jazz. There has to be some reason why that we're missing, or not privy to.

Morris' NBA statistics do not blow anyone away. He was a shooting guard, who displayed crazy efficient shooting in college and in the NBA-DL, who only shot 38.1 fg% in the league, and only 29.2 3pt% here. In games he did not shoot well, he did not seem to pass, and honestly, I only remember him making a defensive impact once. It's very hard to argue for giving a guy who averages 3 points per game, off of 40 fg% (career best in '08-09), more playing time. That said, with the Flash he was essentially the Kobe Bryant of the league. The Mobe, if you will.

He could produce. But did not produce for the Jazz. Playing time is something you could gripe about, but really, he wasn't going to be taking Matt Harpring's minutes - no matter how much that would have delighted me. He also rarely played with guys who a) were better than him, and b) who knew what they were doing. When he played with both a) and b) he fell into line and played the way he was encouraged to play. When he did not he just reverted into "Me Mode".

Would he have done better if he had fewer "Me Mode" minutes? Meaningful minutes, even? Perhaps. We can't know that. But when he did play he was a gunner. A gunner who did not produce.

So production wise at the NBA level - it was disappointing to ME that he didn't do better. But probably not logically possible to advocate for him to get more opportunities to have a chance to produce. (That said, this is like a self-fulfilling prophecy of failure then...)

Unless, of course, there were off-court, or in-practice reasons which solidified his fate.

And frankly, those are things we can also speculate on, and are specifically things I do not have access to. Outside of actually tweeting @FreeMoAlmond, though, I don't think I'm going to learn anything new about this. And I'm fine with that.

To so casually dismiss Almond as a guy who is exactly the type of guy who was supposed to not make it - despite some evidence to suggest he should have made it (NBA ready skill, NBA ready size, 4 year college career, non-broken home, internally motivated to succeed, pick #25, picked in a pretty solid draft class for producing bench guys or better, etc) - suggests to me that there's more to this story that I do not have access to.

Maybe he was supposed to fail? Maybe he himself was the cause of it, and not a minutes crunch or lack of clear rules for him to follow with the Flash?

Looking at Almond's success in other leagues, and the Draft data that says he should have made it, makes me feel all the more disappointed that he did not make it. I don't think he was the prototypical guy to not make it. Unless it was a personality thing that he fits the prototype for. If so, then yes. That would make total sense.

As a fan I expected more from him, the flash, and the Jazz. Instead we got a guy who failed in our system - when it looked like he should have thrived.

And as a fan, that really sucks.