Brian T. Smith of the Salt Lake Tribune posted this article on Enes Kanter's latest workout, in what is quickly being known as the "Summer of Enes". In particular, Kanter's in a two-week camp with Kiki Vandeweghe, learning the ins and outs of the game. From Smith's interview with Kanter:

Does it help to be trained by someone who's played the game at a high level: Oh yeah, definitely. He definitely knows what he's talking about. It's like, how can I say? He's like a basketball professor. He's really smart. Knows a lot of things about basketball. … He's playing basketball with his mind. The first day he asked me, 'What is the strongest muscle in your body?' I was like, 'Leg.' He was like, 'Nope.' I said, 'Abs and core, back.' He said, 'No.' He said, 'The strongest muscle you have is your brain. Always use it, always think about what you're doing.'

This is good. Last week in this spot, I worried about P3 and its influence on players... were they really becoming better basketball players? In particular, they may be gaining strength and agility, but what about the basketball skills they need to succeed? The good news is that it appears as if Kanter is learning some of those skills with Vandeweghe.

Vandeweghe is an interesting tutor for Enes though: he was an NBA perimeter oriented SF, not the back to the basket monster that Enes is. I completely believe that Vandeweghe has the skills to coach Kanter (he has a lot of experience in NBA coaching and managing), but he's not the traditional HoF big-man coach that everyone has been clamoring for. In general, I think that's not necessarily a bad thing: doing and teaching are often two very different things, and a skill at one does not always lead to success in another.

Also under BTS's byline in the last week is this update on Earl Watson's health; in short, he looks doubtful for the beginning of training camp in October. Notable is this line at the end of the post:

If Watson’s not cleared to play by the start of camp, Tinsley will likely serve as Mo Williams’ primary backup.

I don't know if that statement from BTS comes from knowledge or speculation, I'd like to find out but unfortunately he is currently on vacation (and I was on Twitter-hiatus when the link was posted). Do the Jazz consider Randy Foye as an option at backup PG? In our podcast last week, Clark and I discussed Foye at the backup PG, ultimately deciding that he should see some minutes at that position. Do the Jazz feel similarly? Who do you think should play backup PG?

On that note, last night, Clark, Moni, Dustin, Diana and I recorded this week's SLCDunk podcast, featuring our opinions on some of the hard-hitting topics going to affect the Jazz this season. Questions like:

"Who leads the team in points scored? In rebounds? In assists?" and "If you could choose one celebrity to replace Scott Layden as assistant coach, who would it be?"

I'm currently working on editing it, it should be up tomorrow. Keep an eye out on SLCDunk, iTunes (link directly to the podcast here), and Stitcher Radio (link soon to be created as soon as they accept us). Any other suggested improvements or topics of conversation you'd like to have from us are appreciated, we're looking to make this the best Utah Jazz podcast possible.

Are the Jazz Dancers in Italy? I'm glad you asked. They are! 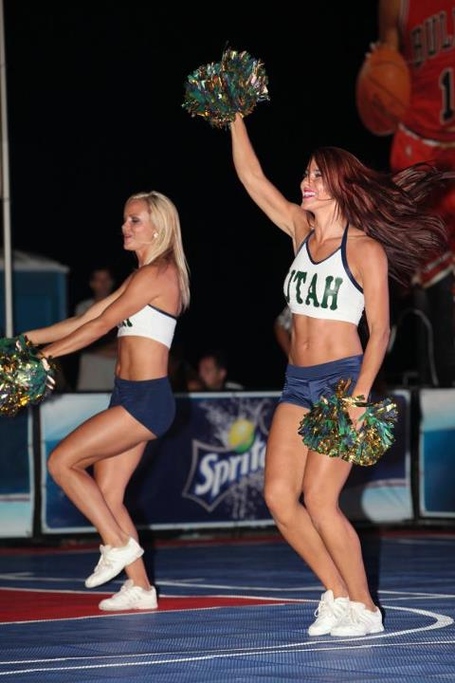 It's not exactly clear why the NBA sent the Jazz dancers to Italy, but well, that's a pretty awesome experience for them. It's sometimes difficult to remember this, with how talented they are and whatnot, but the Jazz dancers are real people, most of whom have other real jobs and real responsibilities. To get to visit Italy is pretty neat. Full Facebook album with more pictures of NBA Italia here. In other on-court entertainment news:

As Apple is set to reveal the iPhone 5 in what will inevitably be the biggest technology reveal of the year, the Jazz' use of technology is still an issue for the franchise. While video editor Jefferson Sweeney tries to get players to download video on their iPads, the Jazz still rely on some pretty basic presentations to share information with their "students" in the locker room(this photo from Mark Jay Whalen's Twitter account): 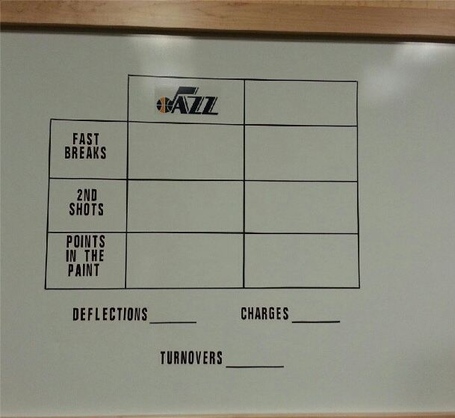 While this photo looks pretty hilariously out-dated at first, after some consideration, it seems more reasonable to me. There are probably (at least) two ways to improve player performance in-game: make them play smarter, or make them play harder. This board accomplishes the latter, with its focus on fast breaks, 2nd shots, deflections, charges, etc. These are not efficiency stats, but rather "hustle" stats. Given Utah's reputation for hard-nosed play, it looks like the coaching staff's focus on these numbers (and even in this presentation) has worked. The Jazz effectively focus on what the players can change in-game, where the iPad video scouting approach reflects a larger technological influence when time allows.

Where technology could stand to have a greater influence, in my opinion, is in the decision making from the coaching staff and front office, answering questions like "Who gets playing time?" and "Should we resign this player, or investigate a free agent replacement?". Rich Cho has worked on building his system in Charlotte, for example. At a minimum, I would really recommend the franchise explore contracting with STATS, LLC. and installing the SportVu system, as 10 other NBA teams do. This would give the team a treasure trove of information, data that is lost forever unless the cameras are installed, that could be used either by the current staff or a future analytics hire.