Jazz Forward Gordon Hayward is primed for a big season. But can he reach 16/4/4?

Share All sharing options for: Jazz Forward Gordon Hayward is primed for a big season. But can he reach 16/4/4?

I'm in the middle of trying to figure out what our team is capable of. I guess you could say, I'm in the middle of doing a Utah Jazz 2012-13 Preview. Predicting how the Jazz will perform is tricky: part of this equation is the schedule, another would be our known parts, yet still, a bigger issue would be our unknowns. And ultimately, team success is going to be how well our team performs - AS a team. We are going to need our players to come together and build off of last season. And we want our Jazz to be greater than the sum of our parts.

Utah Jazz Twitter Nobility David J Smith (@DavidJSmith1232) tweeted today that he feels it's not insane to start having reasonable, yet high, expectations for some of our players. In this case he suggests that: 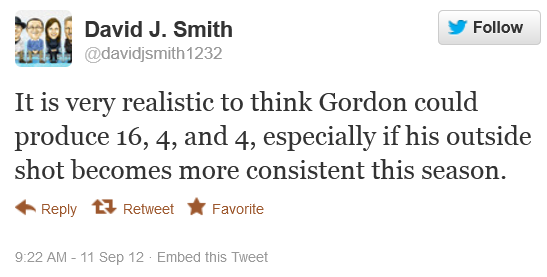 Almost automatically without doing ANY research I have to agree. I think Gordon Hayward can do it. But . . . you know . . . I wanted to see how many other players have done this before . . .

Can The Precious do it?

Can Hayward score +5.2 ppg in +4.0 mpg? That's not a legit idea -- he would have to become more efficient, which isn't just straight percentages -- but would also mean more touches for him and more free throw attempts. I think Gordon can get to that 16 / 4 / 4 level. But he needs to play more, and play more aggressively.

David J. Smith also pointed out that with a better three point shot he could have an additional weapon to use this upcoming season. I don't have any question about that. I also don't question Gordon's abilities to surpass 4.0 rpg and 4.0 apg. It is going to end up being a scoring issue. That said, the guys in the sample were from 14->18 ppg, 3->6.5 rpg, and 3->6.5 apg. A second year Gordon Hayward was a 12 / 3.5 / 3 guy. He is going to have a long career. Eventually he'll be a 16 / 4.5 / 4 guy. But the original premise I believe is still valid ... it's realistic to think he could produce at this level next year.

Especially because all the smart stats guys have been talking about young players making huge jumps in year 2 to year 3. So this is just yet another thing to watch out for this upcoming season.