I've been a Utah Jazz fan since that amazing 7 game series against the Los Angeles Lakers back in the '87-88 season. Of course, many of you have been fans since before then. A few of you joined up after. But the point remains, FOR ME, that was the seminal Jazz season. Of course, that's just for me. The Jazz first made the playoffs in 1983-84, and that was also the first time they won a playoff series as well - against the Denver Nuggets. Since that season and last season the Jazz have made the playoffs 25 different times. The Jazz have played in 47 different series, going 22-25 (46.8%) over that span. Their overall record is 113-126 (47.3%). That's pretty close to being a 50/50 team on any given playoff game. I think (and pray) that over the next few seasons we dip over the .500 mark.

The Jazz have been eliminated:

While researching this I found out that our team seems to have played the same teams over and over again. I already knew that we have played a number of rival teams repeatedly, after all, I already hate the Houston Rockets and Portland Trail Blazers with good reason. But going over the 25 years of Jazz playoff basketball . . . we've only played 12 different teams over our 47 different playoff series. 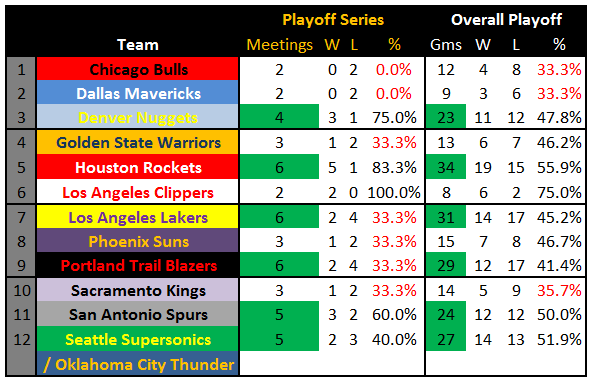 Now yes, I'm not a big fan of the Chicago Bulls -- but man, I really hate some other teams more than them. Mainly, the Nuggets, Rockets, Lakers, Trail Blazers, and Supersonics / Thunder. But again, that's like just my opinion. I'd love to have beaten the Bulls for the title. But if it wasn't for the Sonics or Rockets we would have HAD titles already.

The Jazz have been pretty successful (239 playoff games in 25 different playoff attempts - nearly 10 games a playoff trip), but don't have the big one yet. Hopefully they will. And hopefully along the way we'll beat some of those teams to get there. It'll make it all that much more sweet : )